Wednesday, it was 24ºC in the shade here. There was a very gusty but warm wind blowing too. Not unusual for a summer’s day in North Wales but it’s mid-October. At night it was still 17ºC at 10.00 pm. Even by British standards, this is odd weather, which got me thinking about climate change.

I’m afraid this is little to do with allotments but it is something that we should all think about.

For me, the big news of the week was the latest report from the Intergovernmental Panel on Climate Change (IPCC) on climate change. It seems to boil down to:

Now considering how serious this is, you’d expect it to dominate the news and media but the coverage has been a lot less than you’d expect. Having tried to read the full report, I can understand why. Even the summary is heavy going. The media likes simple stories with soundbites.

The BBC coverage seemed to centre on interviews with Christiana Figueres, a career diplomat described as one of the architects of the Paris Climate Change Agreement. I must admit to wondering if she has a strong grasp on reality.

Electric Cars For All

For a start, she says we should all drive electric cars. Great, I quite fancy a Tesla if I win the lottery, but the problem is over 80% of electricity is generated from fossil fuels. So how us all driving cars powered by electricity is going to help is beyond me.

Then she says we should all become vegans. I can understand the reasoning behind that although I think it’s not fully thought out. Meat production uses a lot more land than arable to provide the same calories. Modern industrial farming methods use both more land and far more energy for meat production.

Grains, pulses and soya are grown then transported around the globe, processed and then transported again to feed animals. Those animals are designed by nature to live on grass but the economics favour the industrial method. Even the grass fed ruminants don’t escape her wrath, they burp and fart methane which is a greenhouse grass.

There’s an interesting article about the effect of grazing on climate change on the Land Magazine. I’d recommend downloading and printing the PDF as it is serious reading. Unlike so much else on the web, it’s balanced and not pushing an agenda.

Even if we were all willing to become vegan it ignores the environmental benefits from pasture raised cattle, sheep and goats. For a start they can live on land that isn’t suitable for much else. Grass is an incredible crop, arguably the grasses are the most important plant family on the planet. It will grow near enough anywhere even on thin and poor soils. It’s fast growing, renews itself and sequesters carbon.

We’re learning more about how to manage land using mob grazing techniques so the topsoil is actually increased in depth and quality. This isn’t a new fad, by the way. I’ve found it referenced in a farming book written in 1943. The ecology of grasslands depends on ruminants. Grass has evolved to grow, be eaten and fertilised from dung. Every home gardener knows that manure is the best fertiliser.

Then we have the humble pig. In woodlands they eat brushwood, helping the trees to grow. They eat near enough anything, acorns to bracken roots are all just food for a pig. There was a time when pigs were a cottager’s animal – nature’s waste disposal system. Feeding waste, pig swill, is illegal in these industrial farming days.

The last animal to consider is the chicken. The older breeds laid less eggs and grew more slowly than the modern hybrids but, from an environmental point of view, they were cheap to feed. The farmers of old knew the benefits of chickens. They reckoned half the value of hens was in the manure.

Running hens in with ruminants improved the pasture. They break up and spread cow pats and sheep dung to get at the maggots and flies whilst scarifying the grass better than a harrow. They went into the grain fields after harvest, gleaning and under orchards eating the windfalls.

Industrial agriculture has given us 320 eggs a year hens and meat birds ready for table in just 8 weeks. But to achieve this they need carefully manufactured and controlled diets. Once again economics over environmental considerations. 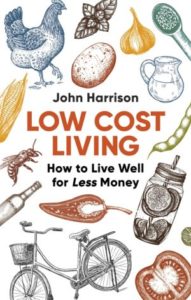 We’re Part of the Whole

Anyway, I’m not a scientist, just an ordinary person but it seems obvious that we’re part of an ecosystem that we can and should work with rather than leaping from the extreme we have now of high meat consumption to zero. I don’t know what the answers are, but I think it’s evident we have a problem that is getting worse. There are over 7 billion people on the planet and by 2050 there will most likely be 10 billion. All those people need feeding for a start.

As a family we do what we reasonably can to be green and reduce our carbon footprint which is a central theme in my book Low Cost Living. Growing our own means food with no transport costs attached and improving the soil means we actually sequester carbon into the soil. Is it enough? I don’t think so.

What we need are practical answers that work both globally and individually. Answers people can adopt.