It’s been a weird weather week here and effectively I only got Wednesday on the plot and garden. Wednesday was hot, peaking at at 24º C in the afternoon but feeling warmer in the strong sunshine. Strangely there were strong, gusty winds but even they were warm winds. It reminded me of the Canary Isles who get lovely weather but always have the trade winds blowing across them. 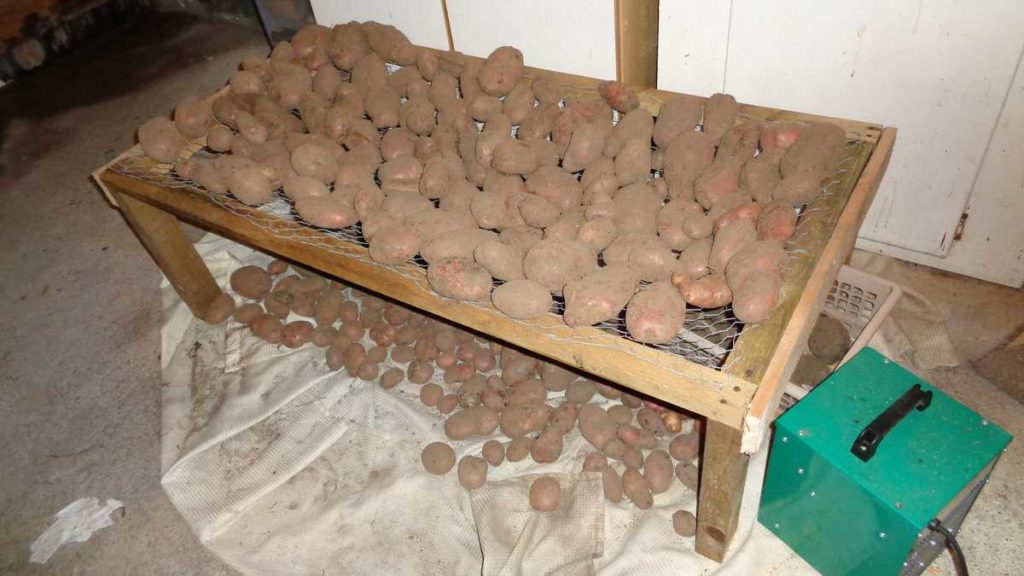 Drying Sarpo Mira using the onion rack and a fan

Monday I sorted the potato crop indoors. This basically involves sorting them into 4 groups. The first, being of good quality and reasonable size get put into hessian sacks to store. The second are OK to use but damaged, most often accidentally forked, or have a suspicious hole implying something has been eating them. These go into the use first sacks. Then I have the tiddlers or too damaged to keep for more than a week or two. These can form the basis of chicken food. Finally there’s the bad ‘uns. There’s a bit of blight and a few tubers that are mushy. These go into the hotbin composter where the heat will kill off any disease and blight.

The last ones to come up were the Sarpo Mira and they were a little damp to store so I popped them onto the onion rack in the shed and set the fan going to dry them off thoroughly.

I’ve some travellers – potatoes growing from tubers left in the ground from the last harvest. These are probably Sarpo Axona as they’re doing so well. They’re in excellent health, no sign of blight and so I’m leaving them in the ground a bit longer. 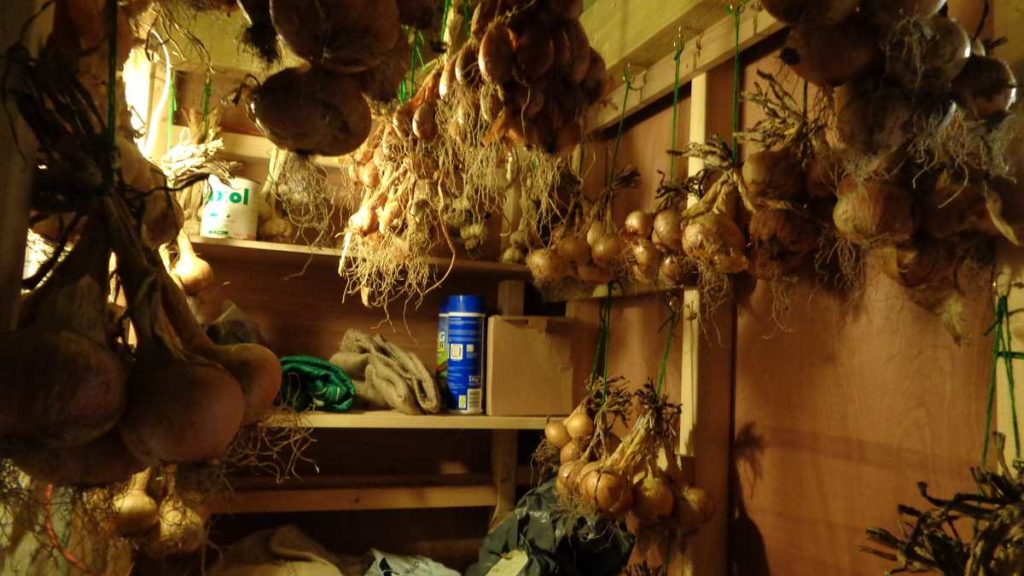 Onions & Garlic in Store – The potatoes are in stacks below

I’d managed to bang my knee on Tuesday when I tripped over a kerb in town and fell flat on my face. Moral is look where you’re going. Since walking around was uncomfortable and kneeling down very painful, I was a bit limited to say the least. Luckily I managed to get a pal to help me for the day on Wednesday and we got quite a lot done.

He moved yet another load of compost into the veg plot for me. The original pile is down to maybe two more loads now, possibly three. It should make a huge difference to to the humus and nutrients in the veg plot.

He also cut the grass for me – I really couldn’t cope with walking up and down behind the mower. I wonder if this will be the last cut of the year but the weather is so unseasonably warm that it’s still growing. We’ll see.

Another Raised Bed to Sleep

I put another of the raised beds to sleep for the winter. This had some dwarf beans that were basically finished along with a fine crop of chickweed. Rather than weed it, I just covered with a couple of layers of cardboard and covered with grass clippings. The bean roots may add a little nitrogen and the chickweed will rot into the soil over winter – sheet composting.

I believe the cardboard will actually add carbon into the soil, so a very small victory in the fight against climate change. We get a lot of cardboard – our books to resell come in boxes as do the envelopes we send them out in. Just a tip, strip off the infernal sticky tape first. That doesn’t rot down.

I avoid using glossy printed card or paper in the garden or compost. It may be OK to use but I’m not sure so that can light a fire or just go into the recycling bin. Ordinary paper, newspaper etc. I know is OK to use. I did watch a video by Geoff Lawton, one of the grand gurus of the permaculture movement, where he used all sorts of paper products, including a book in a mulch. Maybe I’m worrying too much about what I use.

Mowing sucked up and cut up a load of leaves which are falling thick and fast now. Perhaps more accurate to say blowing off the trees in these winds. They’ll actually help the grass rot down being both a ‘brown’ and holding the mix open. Grass does have an unfortunate habit of turning into a solid mass if dumped in a pile.

There were still some branches left from my recent tree surgery to deal with so out with the shredder again. Sappy, young wood will rot down well when it’s been shredded so onto the compost heap with it. That took a few hours but didn’t involve much walking around. Another job off the list.

There were still a lot of leaves around so it was out with the leaf blower next. There’s not much you can do to hasten the decomposition of leaves into leafmould. Adding chemical fertiliser, compost accelerators or urine do not hurry the process. I’ve seen all those methods suggested but the fact is that autumn leaves do not compost like garden waste – they don’t work.

Cutting the leaves up does help hurry the process though. My leaf blower sucks them in and chops them up. It’s actually very good regardless of it being a cheap machine Val found in Tesco of all places.

Another 2 kilos of tomatoes and a nice bunch of parsley.

As the knee was complaining bitterly I moved into the greenhouse and picked nearly 2 kilos of tomatoes before calling it a day and literally putting my feet up.

Thursday the weather headed downhill, the temperature dropping by 10º as the rain came blowing horizontally in the wind. Decided the best thing to do was some paperwork indoors.

Friday was insane – the wind nearly knocked me over and it poured with rain. I did bravely venture to harvest some chickweed and a bolted lettuce for the hens but otherwise cowered inside hoping the roof wouldn’t blow off. Saturday, not so windy but rain continues. Sadly not plotting weather!