We’ve had a load of compost. When I say a load I mean a LOAD! Ten tonnes of compost delivered in the biggest trailer I’ve ever seen. 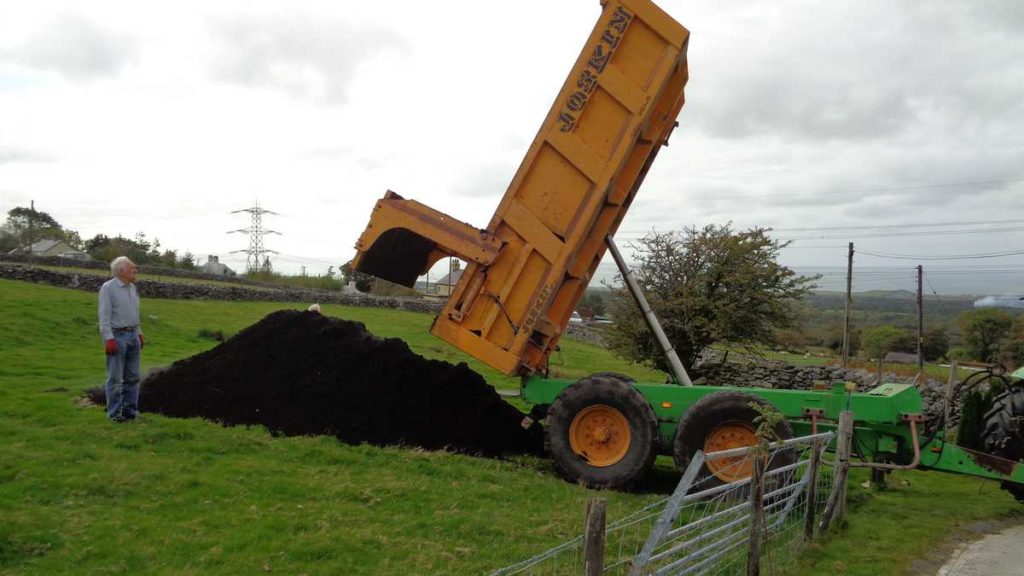 The trailer is actually a lot bigger than it appears in this photo.

Our neighbours spotted an advert on Facebook from a chap in Anglesey offering 4 to 20 tonnes of compost so I got in touch. Since we both wanted some we agreed to split a large 10 tonne load between us. Originally the plan was to have the delivery in the top field but when it arrived in a giant trailer towed by a big tractor, it was pretty obvious that wasn’t going to happen. After a bit of thought we decided the only option was to back the trailer into the bottom field.

I was a bit worried about the weight damaging the drive but thankfully it didn’t. Ideally I’d have had it dropped at the top of the bottom field by the entrance to the vegetable garden. That would have meant taking it over the septic tank and I’d visions of it collapsing the tank or the pipework, so it was dropped just inside the bottom gate. 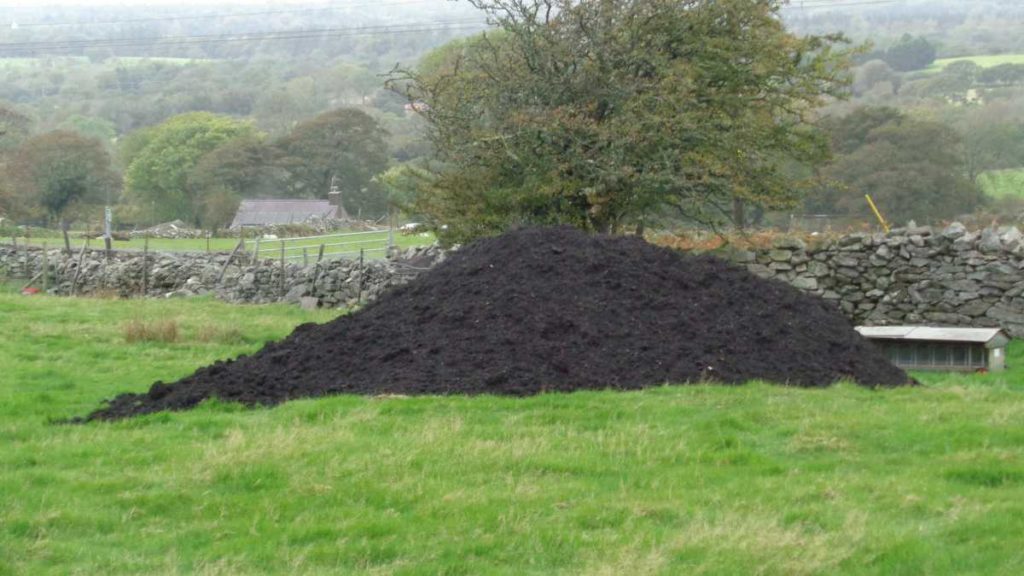 The trailer is an incredible bit of kit. Not just a hydraulic lift to tip the contents but the powered back of the trailer lifts up and over the top. Second hand they seem to run around £50,000!!  10 minutes later and it was trundling back down the lanes, annoying the tourists no doubt.

We’re then left with a compost mountain to move. Our neighbours have two tonne tipper trailer and a large 4×4 to pull it. So it’s a matter of shovelling the compost into their trailer which then takes a load up to top gate by the vegetable garden and the next up to their place up the hill. Once it’s up by the vegetable garden it’s barrowed in and piled where the potatoes have come out. As the plot is cleared it can be spread out. 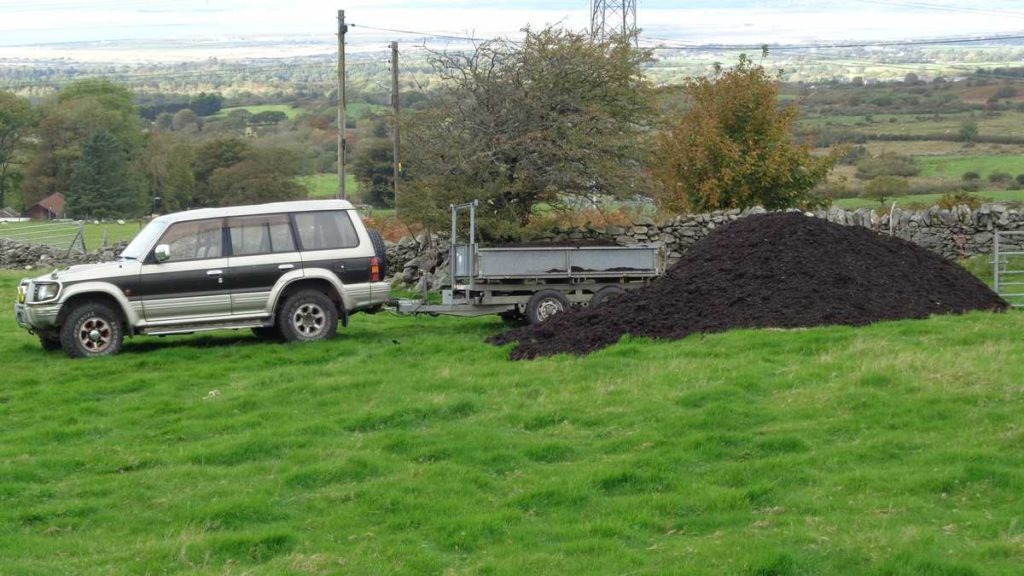 Moving the compost in a slightly smaller trailer.

The compost is pretty good, well broken down although there are a few twigs in there. It’s still steaming a bit so I expect it will break down more over the winter. I’m expecting it to massively improve the soil quality next year. Hopefully the worms will appreciate it too.

Back in 2017 we added the manure from my neighbours lambing shed which made a noticeable difference. He’s promised me more for this year as well so things are looking good for next season’s growing.

Flashback to before we moved.

Thinking back to the allotments before we moved, I’d added a lot to the soil there, increasing the depth from just 15 cm (6 ins.) above the clay subsoil to a total topsoil depth near 60 cm (2 ft.). The whole plot, near enough, was dug every year and double dug every other year. It was lovely when I left … 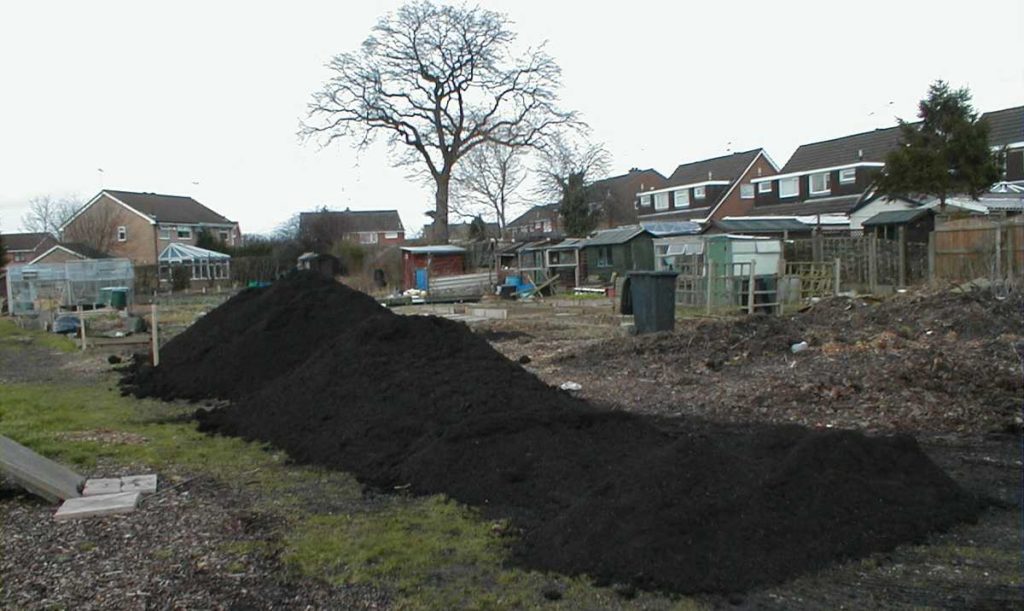 Delivered compost on the allotments – notice the leaves dumped behind it. Photo from 2007

Over the 8 years I added about 14 tonnes of similar compost to that we’ve just had. That went on along with bulk loads of horse and cow manure along with a few thousand litres of turkey litter (wood shavings saturated with manure). I also added a lot of leafmould. The council road sweepers would drop their loads of compressed leaves on the site which we’d go rushing to with our wheelbarrows like ants to a sugar cube.