Spring is officially here at long last. The spring equinox is that magic day when the day is as long as the night and from now until the summer solstice the days will be getting longer. I find winter quite depressing and the change lifts my spirits no end. 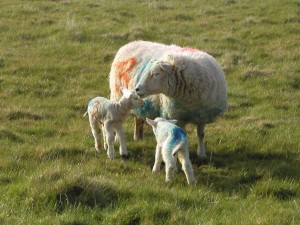 Across the road there’s a smallholder who keeps pedigree texel sheep. Personally I think they look a bit like a bulldog but at least they’re not as difficult as the Welsh sheep who seem to think a wall is just there to be climbed on the way to my garden! Texels are calmer beasts.

I happened to be up at 4am the other morning so I opened the curtains and looked across to twinkling lights down by the coast. Across the road in his shed the lights were blazing so I guess lambing is underway. There’s more appearing in the fields around every day. Lambs are so sweet, especially with rosemary and garlic.

I don’t know if you remember the spam song and sketch from Monty Python (YouTube Video)  but we’ve got a variant on that going here.. Leeks, leeks and more leeks. Leek egg and chips, leek fritters. And suddenly an army officer marches in to the blog and shouts to stop this, it’s getting silly. Hard to believe it first aired 46 years ago.

The remaining leeks have done well to stand until now, but it’s time to harvest and use them or lose them. So up came the lot. The thing with leeks is that they don’t freeze well. You can freeze them but they tend to be very sloppy when defrosted.

Leek and potato soup, with Stilton cheese  is rather nice and freezes well so some batches for the freezer. Val made one batch extra rich by adding some buttermilk we’d frozen from when she made butter last. Meanwhile, we’re working through the leek recipes on the site.

I’ve been emptying the fourth compost bin, topping up the raised beds. When I built them I did it so that I can add an extra plank around the sides eventually, taking them to 18” deep. The deeper the soil, the better the crop is a good general rule.

When I get chance bin one is about half full and bin two is about a quarter full so they’ll get emptied and either used or mixed to finish rotting down in the third bin, depending how well rotted they are below the surface.

I’ve been taking advantage of the dry weather to re-stock the wood pile. I’ve a stack of sycamore which isn’t the best firewood. It burns away really quickly so I’m forever re-loading the wood stove. But it’s free fuel and that’s worth a bit of extra effort. Especially as it’s saving LPG – which is much more expensive than mains gas.

I’ve brought a lot of branches into the dry old cowshed’s wood store to cut up. They’re between an inch and four inches diameter which makes the chainsaw a bit overkill but the reciprocal saw is ideal. A lot faster than the bowsaw half through and stamp to break method.

Apart from one small pile of branches and a few around the field that the wind brought down, that’s it for my own wood. Next winter we’ll have to buy in but hopefully the government won’t have abolished the winter fuel allowance.