The last few days have been glorious. After a winter that seemed set to go on forever, it’s actually warm in the sun. In fact the other day Porthmadog (15 miles from us) was the hottest place in the UK at 16ºC! 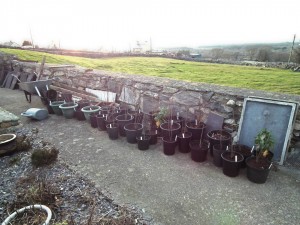 The Rowan whips were a little smaller than I wanted so potted them up to grow on for a year.

So I’ve been trying to take advantage of the weather but haven’t been firing on all cylinders. Personally I reckon I’m suffering from lack of blood as the doctor’s had the lot! Test after test. It couldn’t come at a worse time, not just a busy time in the garden but I’m also working very hard on this web site.

The new web site will look little different to you if you’re looking at this page on a desktop computer. It will look very different to mobile phone users though as the pages are designed to work on all platforms.

To do this involves copying and pasting the text and uploading photos for over 500 pages, writing new code for about another 100 pages that draw their content from a database. Originally I hoped to have this done months ago but things happen and now I’m hoping to be finished in a few weeks. I think it’s a big improvement and hope you will agree when it finally goes live.

Yet More Trees To Plant

In a fit of enthusiasm I bought another load of trees to plant. 25 alder, 10 Elderberry and 20 Rowan trees. The first lot of Rowans went missing in transit and they sent along a replacement but unlike the Alder and Elderberry which were if anything larger than advertised, the Rowan were smaller than I expected.

I didn’t complain since they sent 24 rather than 20 but decided to pot them up for a year to put on a bit more growth first. I just used a multi-purpose compost which I added some slow release shrub fertiliser to. Hopefully they’ll put on another six inches or so before I plant them in the ground. 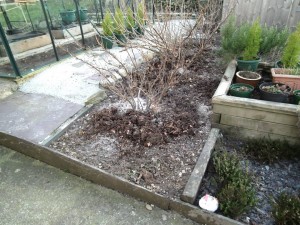 Blackcurrant Bushes after spreading wood ashes and compost under them

Planting trees will most likely end with them going up in smoke one day to feed the woodburner. The ashes are rich in potash and also, like lime, sweeten acid soils. Over the winter I save these ashes in bins in the shed and it’s now time to start returning the goodness to the land.

Some went onto the back border and then I gave the currant bushes a generous dusting. One good point for natural fertilisers is that you’ve got to go some to over use them. With wood ashes it’s impossible to know how rich in potash they are without expensive tests.

The amount of potash in wood ashes varies according to the type of wood burnt and the temperature it burned at. Wood ashes are very light, so I don’t even attempt to weigh them. Instead I just go for good dusting over the root area.

One problem with them being so light is the slightest gust of wind and they’re blown all over you – I looked like a ghost when I finished.

Compost Around the Fruit

Following on from the ashes under the current bushes, I placed some compost around them. Some time back I got a hotbin composter and have to say it’s a wonderful bit of kit.

Near enough all the kitchen waste along with some balancing bark chippings and cardboard plus some green waste goes in and very quickly turns into excellent compost. The only thing that doesn’t seem to rot down well are eggshells. Note to self: crush them up better.