My newsletter this month had a lot of replies from people asking about ant problems and with some methods they use to deal with slugs and snails. 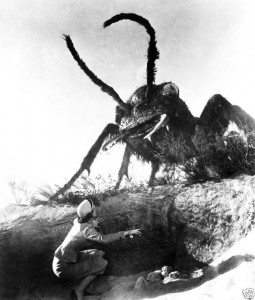 The ants were becoming a problem on the allotment

I must admit to being a bit surprised by this, I’ve never found ants too much of a bother outdoors except for the time I knelt in a red ants nest whilst wearing shorts. By the time I realised it was too late. They were where no man wants and stinging. Luckily nobody looked through the shed windows where I had raced to remove the problem.

Black ants can be a pest as they farm aphids, protecting them from predators and harvesting the honeydew. Here again, it’s never been enough of a problem for me to worry about but it is obvious from the emails I’ve had they’re being a pain this year.

Ants indoors are another thing. We had those and the solution we found was good old Nippon from the hardware shop. Make sure children and pets can’t get at it though. It took a couple of weeks leaving the bait near the spot they were coming in but eventually they stopped. I think the nest was actually in the cavity wall.

Outdoors you can try and find and then destroy the nest but that’s much easier said than done. The most effective solution to outdoor problem ants seems to be nematode based ant killers (like the slug killer) but even that’s not 100% effective by all accounts. You can find those ant killers here.

I’ve had people saying how effective beer traps are – yes I agree they catch a lot of slugs but my point is that there are a lot more than the ones you catch. Going out at night with a torch you will spot them and salt will kill them but you can’t do it every night (or eventually two nice doctors with a special jacket for you will come to talk to you)

I find hair cuttings from our local hair dressers, spread liberally about the plants, works well and improves the soil too!

Sounds good to me if you can get the hair and it doesn’t blow away.

The best tip I can give anyone for getting rid of snails is to leave 2 ft lengths of plastic drain pipe amongst your crops. If you look at them in the morning you will find loads of snails inside just tap the pipes and kill the snails. Yesterday I found 78 in one pipe.

No harmful chemicals and no cost once you have the pipes, been doing this for years, you also get a few slugs.

I find an old piece of wood left on the ground gets the slugs but I can see a pipe would work a treat on snails.

If you have a good method of dealing with ants or a favourite slug and snail solution, please pop them into the comments box below and share.