You might remember my lovely Vitavia greenhouse got turned into some surreal modern-art sculpture of tangled metal and broken glass in a storm. I hadn’t fixed it as securely to the base as I thought and the wind tilted it and then flipped it. 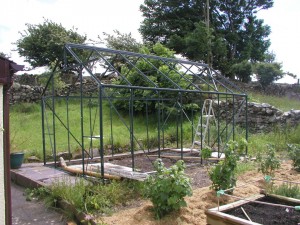 The replacement greenhouse is nearly ready.

In hindsight (a wonderful thing) I realised it was in the wrong place. I thought the old cowshed would provide some sort of windbreak but it didn’t really provide enough so the replacement is going on the other side of the house, which is better sheltered.

The base this time is some 4 by 3 beams into which large nails were driven partway and then concrete set around the beams and nails. Take a break for winter because you don’t want to put a greenhouse up in high winds and by spring I should have erected the new glasshouse. 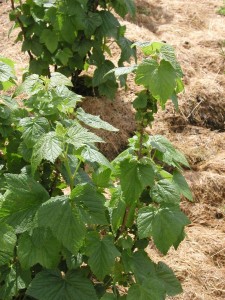 Blackcurrants developing well on the bushes

Two problems though, first I’ve been really pulled out with work and second my health has not been great this year. The cataract operation kept me indoors during January and after that I hit problems which have turned out to be from my blood pressure medicine.

Happily work has gone back to normal now and health is improving with a change in medicine so it’s back to action. To add to the fun, the weeds had reclaimed the greenhouse area so they all had to be cleared before I could even start putting the house up.

This time I want to be sure it survives the weather so the house is sitting on 2x1s which in turn rest on the beams. To stop it from lifting, I’ve screwed through the frame, through the 2×1 into the beams using 90mm screws.

There’s about a day’s work to put the glazing bead on and then another day to put the glass in but that’s it. I’ve also got some lengths of L shaped aluminium which will be used to reinforce the structure. I’m taking no chances this time.

I had some sad news about my old 10×8 greenhouse that I left behind when we moved house. Apparently it was moved to another plot and the base not fixed down, so that was a victim of the winter storms too.

The moral is, no matter how heavy the greenhouse is with the glass, you must MUST fix to the base securely.

To the side of the house I’m going to make a permanent paved area and that will serve for some cold frames. On the other side of the path is a run of blackcurrant bushes which are starting to become productive. 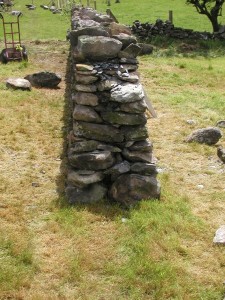 Behind the house there is a gap and then a stone wall. I’m planning on fixing some fencing and planting a blackberry and a tayberry to train along the fence. We’ve got some spare fencing as we’ve given a piece of land to our neighbours so they can have a direct access to their house rather than the long winded route with 4 gates they have to use now.

This track runs along the boundary so they’re putting up a new dry-stone wall. The chaps doing it are making a really good job of it, which shows up the defects in the rest of the walls we have. It’s fascinating watching them work, they make it look so easy. They pick up a stone and pop it into the right place which is a skill that comes with years of practice.