For me the peak of kitchen gardens would have to be the late Victorian walled garden through to the first world war. The high surrounding walls keeping the wind out and creating the most favourable micro-climate possible for growing as well as keeping the riff-raff out provided the backdrop to an ordered world in which the head gardener’s word was law.

His job was to provide fresh vegetables, herbs, fruit and flowers for the ‘big house’ and the land owner, who was usually an aristocrat. Amongst the landed gentry there was a great deal of competition and one-upmanship based on the abilities of the head gardener. 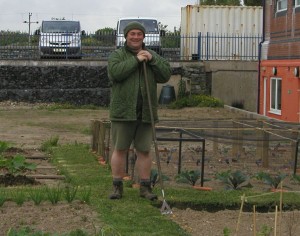 Ian Newton in his kitchen garden

As they entertained each other at elaborate dinner parties the host would demonstrate his status by serving up fresh vegetables just out of season. On the table there might be a dish of fruit like a pineapple surrounded by grapes in December.

Now this might not sound impressive to you but keep in mind that you couldn’t pop down to your local supermarket and pick up anything you fancied on any day of the year. No supermarket and even if there had been, no airplanes to fly in French beans and roses from Kenya or pineapples from the Philippines or Costa Rica.

Apart from his knowledge, the thing the head gardener had to help him was an almost unlimited budget. He employed a small army of staff, ranked from the pot-boy to the under-gardener and equipment like heated glasshouses with coal-fired boilers.

That pineapple on the table probably cost, in today’s money, something like £4,000 to produce!

It all came to an end with the Great War although some gardens limped on with greatly reduced staff afterwards. But the memory and records of those heady days remain from when the art of gardening was at its peak.

So I was quite excited to get an email from Ian Newton inviting me to see a kitchen garden he’s creating. Ian lives near Hull but in the week he’s working in Anglesey and staying in the Hotel Cymyran near Valley.

Now, if you’ve lived out of a suitcase on expenses, you’ll know the charm wears off pretty quickly. Even in London it can get pretty boring and, whilst Anglesey has its charms, it’s not got the night life of London. Those hotel cooked breakfasts and 3 course dinners take their toll as well, relentlessly increasing the waistline.

Ian’s a keen grower with an allotment at home but he noticed that behind the hotel was a disused equestrian event area surrounded by high walls to windward. That area of Anglesey is particularly windswept jutting out into the Irish Sea and pretty bleak on a grey day.

He had a chat with the owner and they cleared the surface leaving him with a blank canvass. So four nights a week, weather permitting, he’s outside getting some exercise and developing the kitchen garden to supply the hotel’s needs. 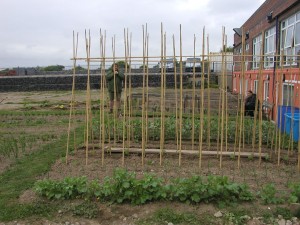 He’s made remarkable progress and has an almost text-book plot with ordered rows, correctly spaced of the various vegetables successionally sown. The brassicas are covered with netting which keeps the pigeons off and will hopefully keep the butterflies out as well.

He’s a bit stuck for starting things off without a greenhouse so he’s converted the old judging booth into a sort of greenhouse. It’s double glazed but lacks a door so for a propagator, with typical allotment ingenuity, Ian’s using a broken tall pub fridge with glass door.

There’s talk of eventually building glasshouses for peaches amongst other things, block paved paths and soft fruits. The hotel’s turning Ian’s hobby into a bit of an attraction. Hopefully we can see how things progress as the season goes on.