Garden Diary › Allotment Garden Diary › Was that the Summer? Tomatoes, Piccolo and Cedrico
Free Seeds worth £6.00 + when you buy Our Books

Was that the Summer? Tomatoes, Piccolo and Cedrico

We’ve had nearly a week of reasonable weather and now the weatherman is threatening severe weather for many of us.  Just when you thought it was safe to go into the allotment… (imagine the Jaws theme music in the background!)

I did pop down yesterday just to water in the greenhouses and grab a lettuce for tea but it didn’t really justify an entry in the diary.

If you pull a large lettuce, complete with roots and it’s too much for one meal just pop the roots into a glass or vase of water and the lettuce will keep for days just as if it was picked fresh

On the subject of tea, Larry had given us some of his Cedrico tomatoes as well as a couple more of the Piccolo. The Piccolo are really nice, very sweet cherry tomatoes but the Cedrico didn’t really compare with Ailsa Craig for taste.

Apparently M&S are selling Piccolo tomatoes, I can understand why. The Cedrico are good for showing and probably are a commercial variety. They have a uniform reasonable size, good colour and excellent keeping qualities. Despite that, to me they fail the most important taste test. Not bad, just not special. If  I’m going to grow something, I want special taste. 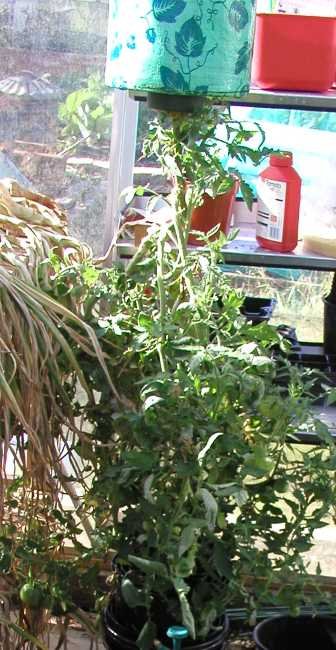 And while we’re talking tomatoes, I think the results are in for the Topsy Turvy Tomato Grower. You may recall I got one to trial and the theory is that the plant is upside down and puts its energy into producing fruit free from the pull of gravity.  I planted an Ailsa Craig and was disappointed to say the least.

The plant just attempted to curl back up and because it was upside down, I found it really hard to keep the sideshoots under control so the plant ran a bit rampant. As for the claim it produces fruit earlier than normal, I’ve found it to be slightly slower if anything.

Well it was a good bit of fun and certainly a talking point but I don’t think I’ll be using it again.

I hadn’t got too much on my list to do today so I thought I’d spend the afternoon on the plot. When I downloaded my email this morning I knew that was out. About 400 emails flooded into the computer but these weren’t spam, they were notifications that links had been submitted to the Poultry Pages and another web site I run.

Needless to say, they weren’t exactly relevant to chickens, just the usual filth that spammers think we want. So I had to take the link submission forms offline, it was flooding in faster than I could delete it.

I didn’t want to make it too hard for genuine people to swap links with me but I had to stop the spam. Anyway, I think I’ve got it sorted now but that’s a day wasted just because of some moron with a hacking script. If I sound grumpy, that’s because I am. I’d give these people 20 years community service for all the time they waste for hundreds of web sites.

Finally hit the plot around 5.30 pm and gave the tomatoes a water in the greenhouse as well as catching a few sideshoots that had appeared since last time.

Back in the large greenhouse the blight continues to spread so I cut out more leaves and a truss where the immature fruits were blackening anyway.

Such a shame but that’s growing, some years you win and some you don’t.

It’s been a bit mixed on the brassica patch. I harvested another of my famous mini-cauliflowers. although this one was big enough to just about make a side dish for a meal. I think it’s the soil since Janice showed me the Purple Grafitti I gave them and they’re doing quite well in pure compost.

On the other hand, I got a nice carrier bag full of calabrese. I just used some secateurs to cut off the heads, leaving the plant in the ground. They often put out sideshoots and you get two crops for the price of one. Check out this video: New Tomato Plants from Side Shoots

I took up the Ailsa Craig onions next – another success story. About 10 had started to rot and a couple had split into two onions but the rest are a good large size and should dry out well.  I really don’t think I’ll bother with sets next year, just Ailsa Craig and possibly another white onion from seed as well as a red onion.
Posted in Allotment Garden Diary

Leave a Comment Here on Was that the Summer? Tomatoes, Piccolo and Cedrico Cancel reply