It’s been a difficult year for me with various health issues taking my eye off the growing ball. However, with a little help from my son-in-law we’ve managed to get a lot into the ground, albeit late. And the crops are really starting to come out now. 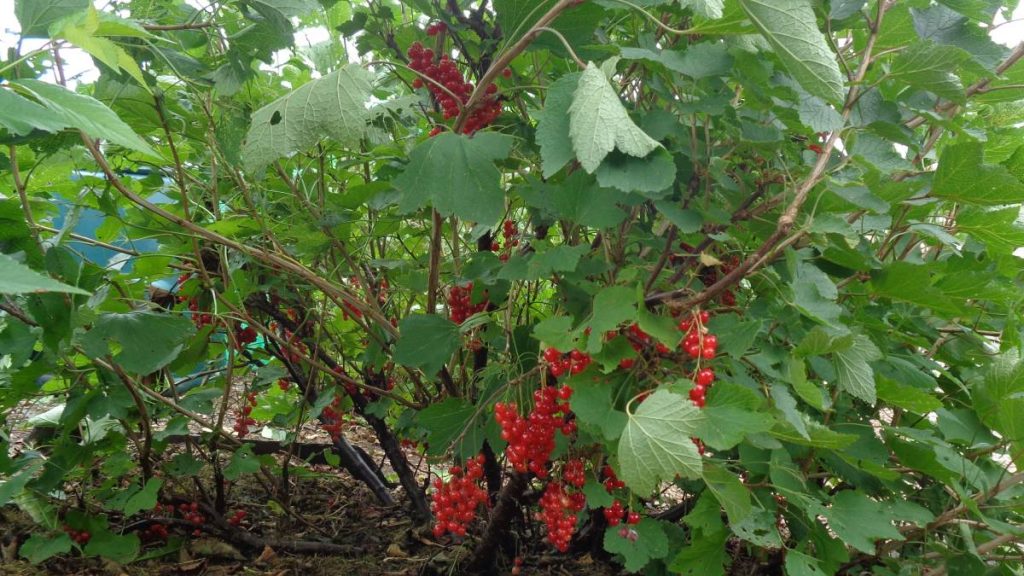 The redcurrant bushes are still loaded despite having had 2 pickings already!

I’ve a number of fruit trees here but sadly they don’t perform well. I hoped for some cherries and it looked quite promising earlier in the year when the flowers appeared. Nope, zero, zilch. Same goes for the damsons and plums.

We look set to have quite a few pears forming and some apples too.. as long as some stray sheep or fox doesn’t get them this year. 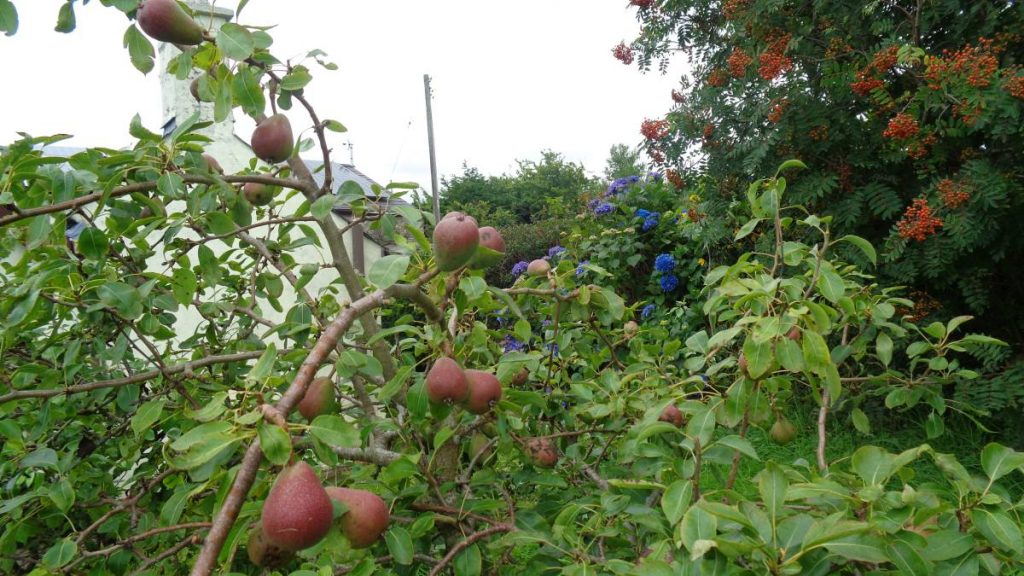 Looks like we’re going to get a nice crop of pears this year.

We have five mature blackcurrant bushes producing about 25 kilos of fruit with little effort beyond some mulching and an annual prune. The hardest work is actually harvesting them.

Bit of a mistake really, one bush would be plenty for us. Now organic blackcurrants would set you back around £10.00 a kilo. I’ve said to a few people that they’re welcome to pop up and harvest as many as they want but no takers..

We have three bushes that, like the blackcurrants, produce far more than we need. I’d estimate each bush produced 5 Kg this year. These organic berries go for around £15.00 a kilo and we’re now feeding the surplus to the hens…. 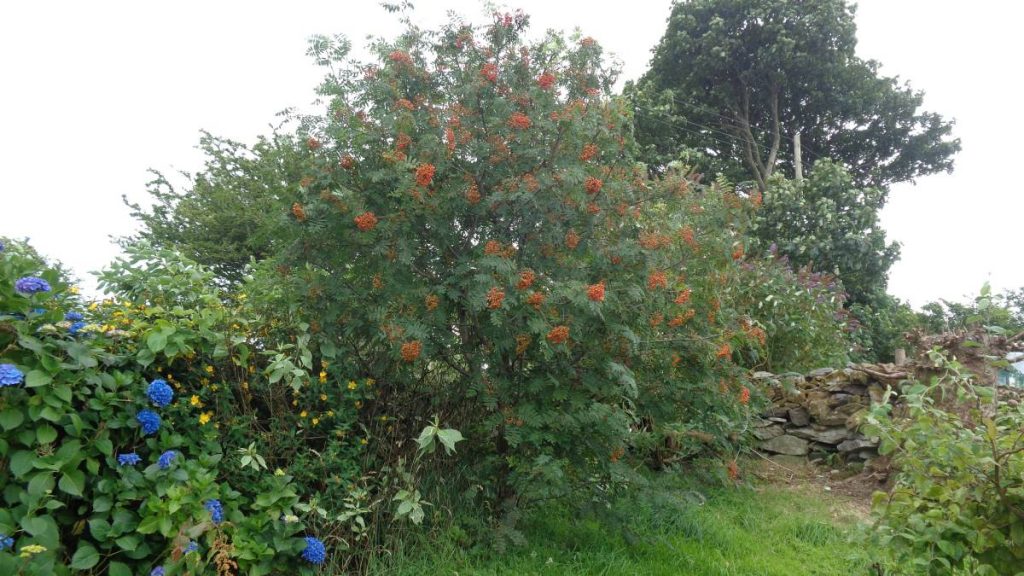 Just one of the many rowans we have dotted around in the last 12 years. They’re are heaving with berries.

Whilst we don’t grow these as a fruit for ourselves, the rowan trees around are heavily laden with berries that will help the birds prepare for the winter. I know you can make a preserve from them but our store cupboards are heaving anyway.

Cultivated and wild blackberries looking great – expecting a bumper crop of those. I’m also expecting great things from the elderberries if the flowers were anything to go by. 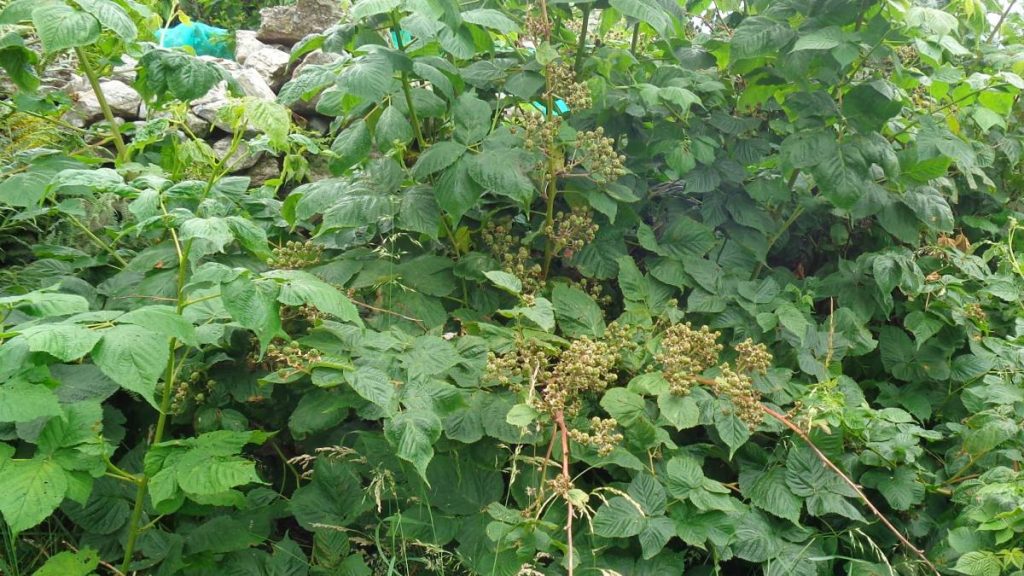 It won’t be long before these blackberries are plumping and colouring.

Some of the calabrese has done really well but some has only produced a tiny head or no head at all. Turns out the cabbage root fly has struck. It’s the first time the evil little beast has bothered me since we moved here 12 years ago. Looks like my days of growing leafy brassicas without protection from the fly are over.

In the polytunnel I planted some calabrese at a fairly close spacing of about 30cm having read that you can close plant calabrese. Well that was stupid of me. What was I thinking? Large, leafy plants need the space or they turn into tall, spindly and totally unproductive plants fit only to give to the sheep.

Tried a new to me variety of drumhead, Mozart. Best spacing is 24” but you can closer space for smaller heads. Huge heads are impressive but there’s just the two of us so an 18” spacing produced the right size to give us two meals, about 750 grams.

Snowball cauliflowers did OK but nothing exceptional. Fast though. I love cauliflower so hoping the Galleon and Violetta do better.

Climbing French Beans Cobra in the polytunnel producing ridiculous amounts despite some plants dying off. No idea why, they started climbing up the strings and then just turned brown and dead.

I’ve sown some replacements – probably too late but what’s to lose?

Tomatoes starting to ripen faster than we can eat them. Except for Sungold which my grandson eats like sweets. Should have planted more of them! He also loves cucumber and given the chance will happily munch his way through a cucumber as a snack. During the heatwave he ate three small fruits one after the other and would have eaten a large one to follow if allowed.

Bit of a problem on the lettuce front. The earliest in the greenhouse border didn’t last long in the hot salad-eating weather. The follow up crop in the raised beds has fed the wild rabbits. The rabbits weren’t a problem until last year when my cats retired from hunting.

We’ve started harvesting the Charlotte potatoes. I’m a bit disappointed as the yield is low. There’s something wrong as the foliage is pale with some brown spots and not very well developed.

This isn’t blight but it could be a viral disease of some sort. There have been a lot of aphids this year and whilst they don’t cause much harm themselves they do spread viral diseases.

Another possible cause is magnesium deficiency. Oddly the symptoms are pretty similar. On the basis that it could do no harm and just might help, I applied Epsom salts to increase the magnesium. Didn’t really help but when I lime at the end of the year, I’ll use dolomite lime to counteract any remaining magnesium deficiency.