The heatwave seems a distant memory now so cramming the outside work in whilst the weather allows. Seems we are getting enough rain to irritate but not enough to do a lot of good for the plants. The large amount of organic matter incorporated into the soil helps a lot by absorbing and storing water but the sponge isn’t infinite. Still, we’re better off than a lot of people in the south of England who’ve had no rain for ages and are waiting for the giant sandworms of Dune to appear! 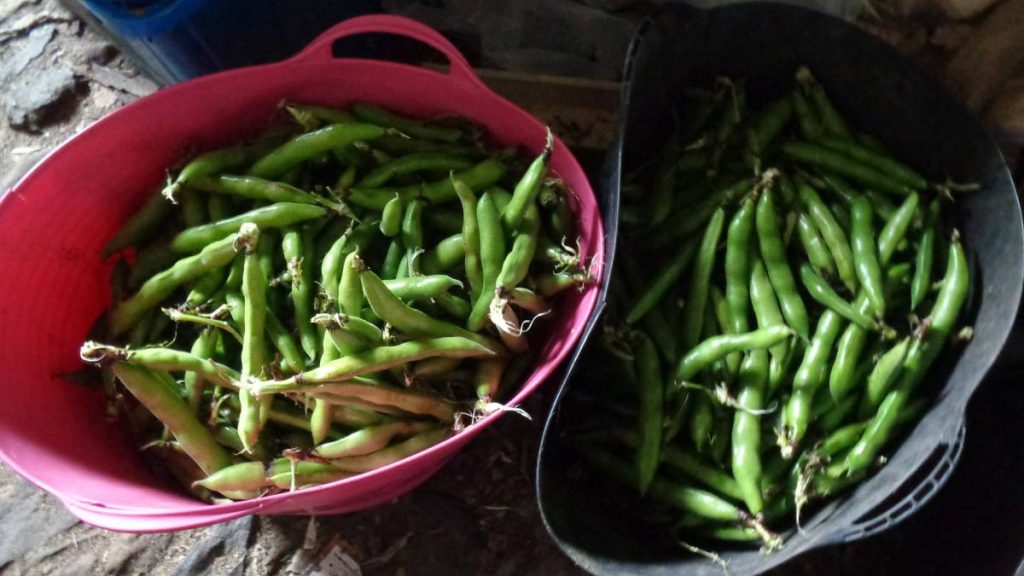 Two trugs full of broad beans from one raised bed. Not a bad result at all!

First thing was to check the Eden greenhouse. The Chiligrow reservoirs needed refilling as did the Hozelock growbag waterer. The Quadgrow was desperate. The one in the Eden is the latest version which is effectively two half Quadgrows with a connecting pipe. Given a choice, I’d take the old design over the new every time. Much easier to fill and less fiddle generally.

A colander of tomatoes and five small cucumbers along with a few peppers. In the Vitavia greenhouse there are five aubergines happily swelling on the plants. Not a big favourite but it’s nice to have our own aubergines.

First thing I checked in the field plot was the young cauliflowers recently planted in the mini brassica cage. It appears a rabbit has got in and half the cauliflowers are now just a few leafless shoots. Used an old fence post to hold the netting on the cage down more firmly, hopefully protecting the surviving plants.

Since the cats have retired from hunting, it looks like we’re going to have to do something to deal with them. A powerful air rifle should make a dent in the numbers.

Harvested the second row of Charlottes. Not terrible but a disappointing yield. I expected near double what we actually had. On the plus side, that’s just the first two rows. There’s a lot more varieties to harvest and I think we’ll hit our self-sufficiency target.

One raised bed was given over broad beans, variety The Sutton. Very pleased with them, two large trugs full. The Sutton has the benefit of not being a tall plant – useful in the windswept plot here. I know some people don’t like broad beans but they’re one of my favourite veggies.

I’ve also got a large bed planted in the walled veg plot of Karmazyn. These are a lovely flavoured red bean that freeze well.

Last planting of leeks. The raised bed has had a good layer of rotted manure and another of compost prior to rotavating with the Mantis. Then trodden down to firm it up prior to dibbing holes and dropping the seedlings in. They should do really well in the rich soil mix.

Very underrated vegetable, the leek. Nutritious, flavourful, good substitute for onions and holds well in the ground. They can be enjoyed fresh for six months although they don’t really freeze well. They’re good for clay soils, as well. The network of roots left behind when they’re pulled aerates and adds humus.

Up in the polytunnel, yet another picking of Cobra beans. About four meals worth for us. One for now, three for the winter from the freezer. I’d planned on planting a few more beans to replace the gaps from those that mysteriously died – but time ran out so on tomorrow’s job list. At least I can work in the polytunnel and potting shed in bad weather.

The sweetcorn in the polytunnel are getting near – the tassels starting to turn brown. The small bed out in the walled veg plot are way behind as you’d expect. It will be interesting to compare the crops in the end.

Planted ten Di Sicilia Violetto cauliflowers out in the brassica tunnel. The holes are at 18” spacings which is a bit too tight for cauliflowers so planted alternate holes in the row.

Fantastic result with Mozart cabbages in there – they’re ready to come out now but seem to be holding well. I’m pricking out and potting up the last calabrese of the year. They’ll fill in the spaces in the brassica tunnel when they open up as things come out.

Not sure what to do with the tunnel next year. I may move it but I could just lift the matting and add a load of manure to revitalise the soil below.