There’s a lot going on at the moment but it’s always a matter of running to keep up with everything. My plan to ease off this year came to nothing. With all that’s going on in the world, I want to make sure we at least have food on the table.

The first early potatoes in the polytunnel are ready to start lifting. The earlies outside are just showing now as well. Good job too, we had to buy a bag of spuds last week. Last year I went too heavy on the first earlies and light on the maincrops. This was a mistake as the first earlies don’t keep so well, so we ran out.

Surprised how well Charlotte, a second early, kept though. The last of those had started to sprout so I chitted them and they’re planted out in the main potato bed in the field plot.

Sweetcorn in the Polytunnel 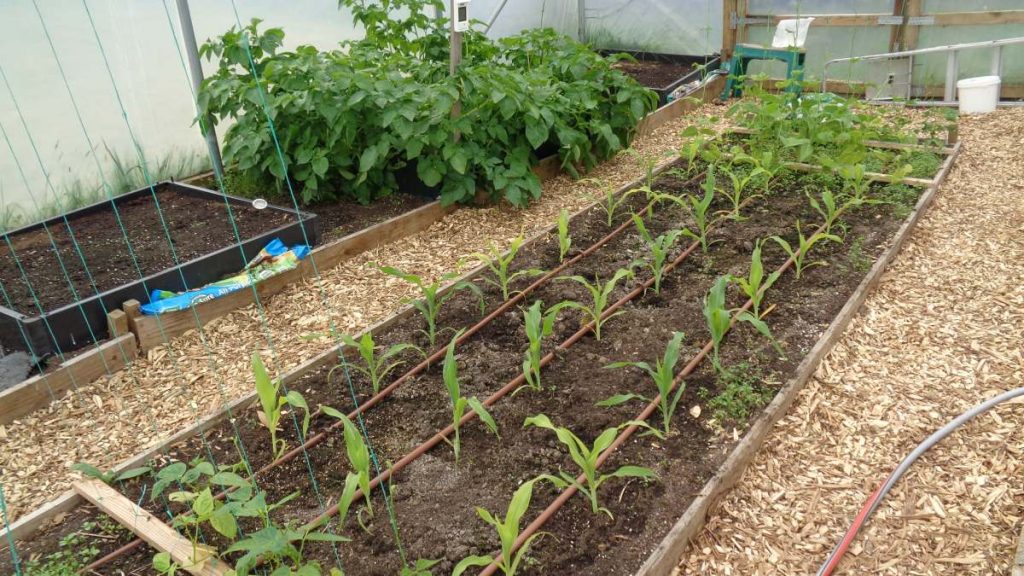 Sweetcorn in the polytunnel, potatoes behind. Climbing beans at both ends.

In the centre bed sweetcorn (Swift) is planted, 24 plants which leaves me 20 plants to get in outside. I’ve got a spot that’s very sheltered from the wind but fairly sunny picked out for them. I can’t say I’m holding out much hope for the outdoor crop here but it’s got to be worth trying.

I’d chitted and potted up a pack of sweetcorn seed so ended up with 21 plants over. These have gone into a sheltered spot in the walled vegetable garden. We popped into a garden centre the other day and they had sweetcorn plants for sale at £1.50 each. So my 99p packet of seeds is already worth £67.50! 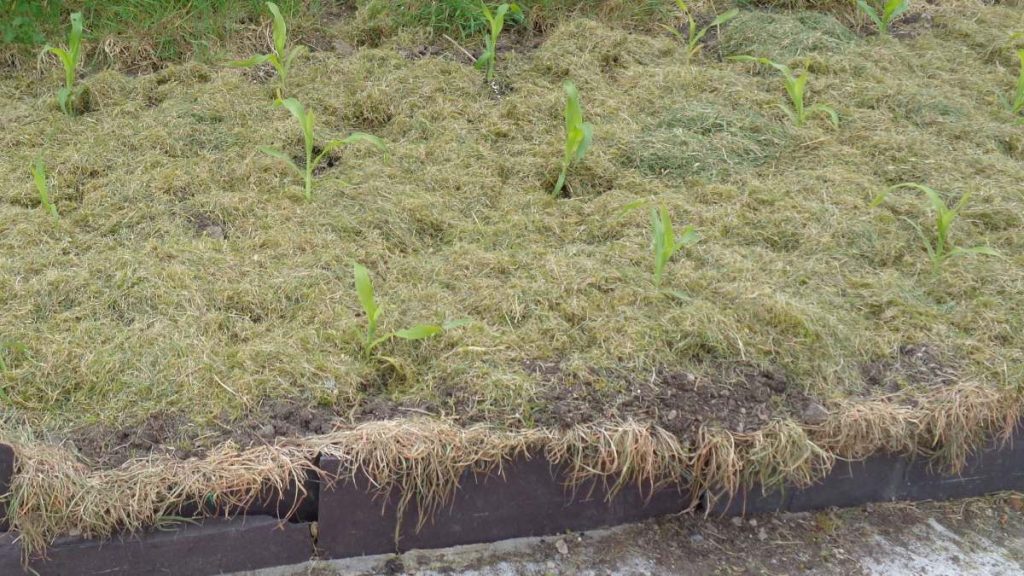 Sweetcorn mulched in outside bed.

We’re swamped with chickweed, more than the chickens will eat, and other weeds of course. Much weeding has taken place. The grass is growing well so mulching under the blackcurrants and around the sweetcorn. It helps with the weeds and improves the soil. Also mulched the elephant garlic in the walled vegetable garden.

Brassicas in the Polytunnel.

I’ve got a few Hispi cabbage and Zen calabrese going in the polytunnel. No real reason for using the polytunnel except I want to see how they perform. I’ve a lot of brassicas to plant outside, mainly in the brassica cage but the extras will have to risk the dreaded cabbage white caterpillars in open beds.

Some years the butterflies are not too much of a problem but others they’re a total nightmare. No matter how often and carefully you check for eggs and hatchling caterpillars, suddenly a plant is stripped to a skeleton. Still, the chickens appreciate the protein.

I’d sown my parsnips in peat pots, under heat and then planted out after germination but before the roots were trying to get out of the pot. All was going well until half the pots were pulled out of the ground. It turns out one of our cats thought it was a great game! I’ve another batch gone in to replace where required now.

My Stihl GHE 105 shredder is playing up – just when it’s needed as I’ve a lot of woody material to shred. Starts OK and then blows the plug fuse. Some googling suggests the motor has a capacitor that needs replacing. Hope I can do it myself but otherwise I’ll have to get it repaired. I’m not very pleased.. it wasn’t a cheap machine. When it works, it’s great … when it works.

My favourite shredder was a cheap Black & Decker I gave away when we moved to a house that didn’t have a garden as such. There was a tube at the side for branches which guided them to the correct angle to the blades.

What I loved was the ability to remove the funnel safety guard so I could feed privet clippings through quickly. Of course it was incredibly dangerous – with some effort I could have put my hand into the blade and chewed my arm off. Boy I was wild in my youth. Modern shredders are better designed to prevent people bypassing the safety measures.