For years now I’ve grown the bulk of my leafy brassicas under nets. Now I’ve made it virtually weed free as well as pest free. 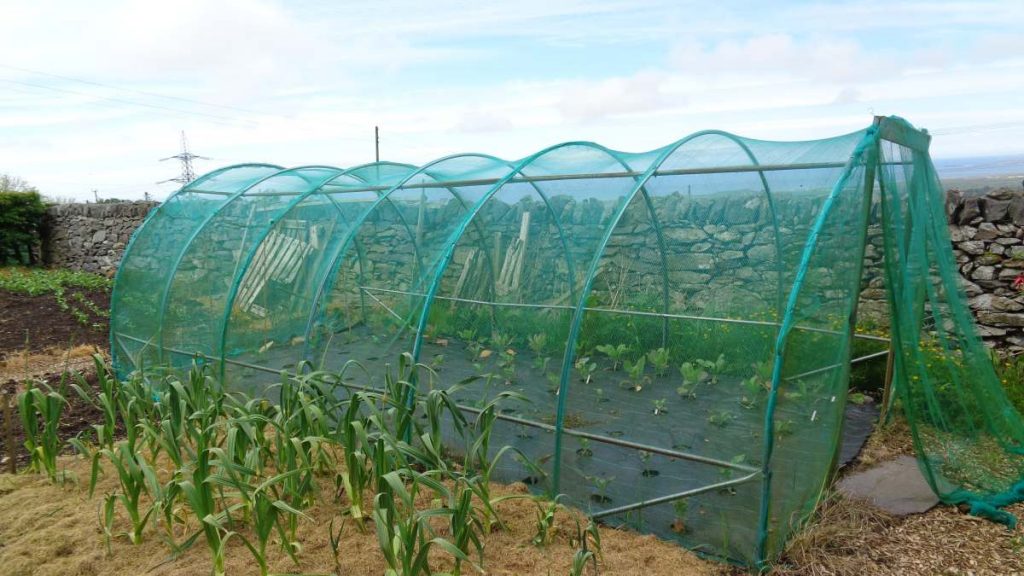 Firstly the netting keeps the pests away. The two main pests being birds and butterflies. In a bad year for butterflies it’s almost impossible to keep up with the amount of eggs being laid and caterpillars on the brassicas without resorting to chemicals. I don’t like using pesticides and particularly onto the part of the plant I’m going to eat. Netting isn’t perfect but it makes it easy to keep the crop pest free without chemicals.

Secondly the micro-climate is slightly better in the cage than out. The wind isn’t stopped but it is reduced in power. This reduces wind chill, effectively making the temperature on the plants warmer. It also prevents wind-rock. This most effects Brussels sprouts but also any of the larger leafy plants. The wind rocks the plants and this damages the roots preventing the plant from absorbing sufficient nutrients to fuel growth.

The easy way for me was to buy a cheap polytunnel off Ebay. I could have built something with a wooden frame but there was little difference in cost. And that was before the recent price hikes in wood and building materials.

The galvanised metal frame was easy and quick to erect for two people. It’s durable although I don’t expect it to last as long as my proper polytunnel frame. The scaffold / windbreak netting was also bought off Ebay and attached to the frame with cable ties.

The supplied polytunnel skin could have gone over the frame but I don’t believe it could stand up to the high winds we get here. The netting allows much of the wind to pass through where a polytunnel skin doesn’t. The full wind force acting on the polytunnel skin would probably buckle the frame and destroy it.

Incidentally, my First Tunnels Polytunnel has a much sturdier frame and stands up to everything nature throws at it here. 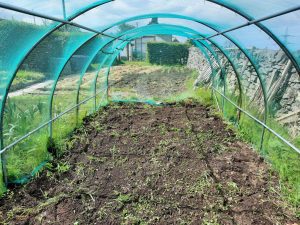 Inside the brassica cage the weeds were growing well, so a quick hoeing and rough raking out got it as the photo shows. If I was planting into that normally, I’d want to do a better cleaning job.

Next we laid out non-woven weed matting. I’d bought a piece the correct width and twice the length needed on Ebay. Cutting it in half using a gas powered hot knife so the edges didn’t fray only took a couple of minutes.

I’ve a range of different brassicas going into the tunnel and they have different spacings. For example:

The matting will last for years and the mix of plantings will change so what to space the holes at? I decided to go at 18” spacings. Some things will have more room than needed and by leaving gaps others a bit more or less. I can also plant cabbages that don’t need much space next to brassicas that need more. It’s not perfect but should be good enough.

I could have made holes at closer spacings but that would weaken the matting, reducing its life. It would also mean lots of vacant holes growing weeds.

I made a simple template from a piece of scrap plywood by cutting holes at the correct spacing with a hole saw. Bending down to move the template lots of times is not the best thing for my back so I fixed an upright handle to the template. 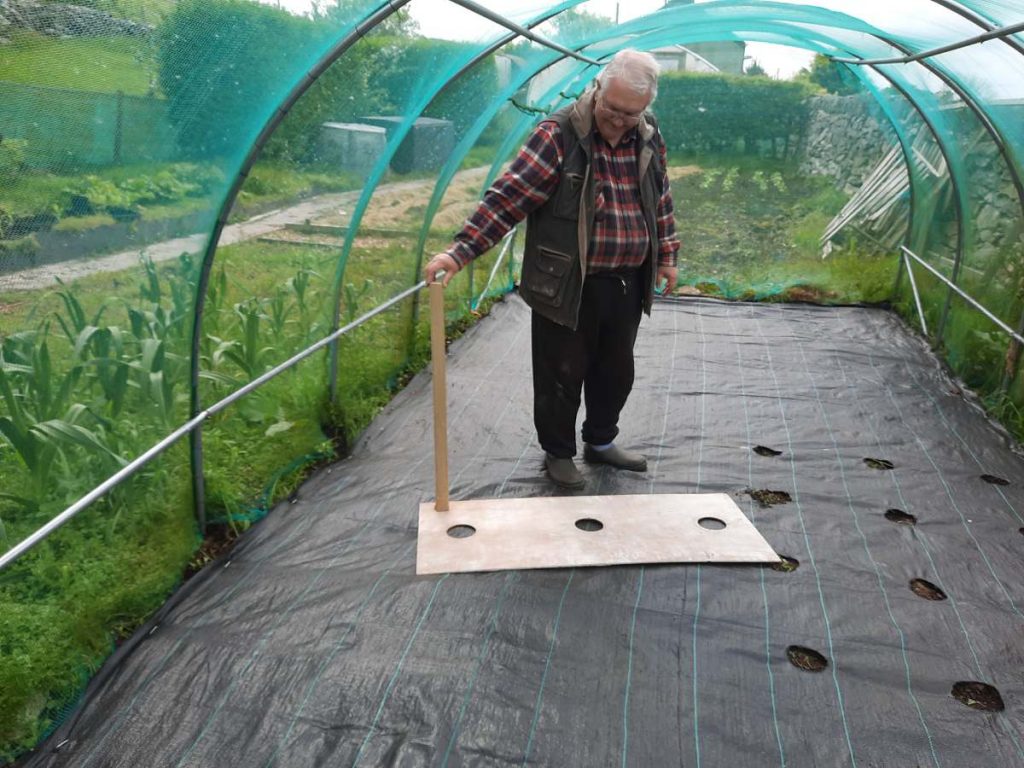 Me and my no-bend hole template

Using the weed burner to cut the holes didn’t take long – this video is me burning holes for some squash last year. My son-in-law made this video clip of the process on his phone.

It looks rather good with the matting well anchored using staples and all the holes made. 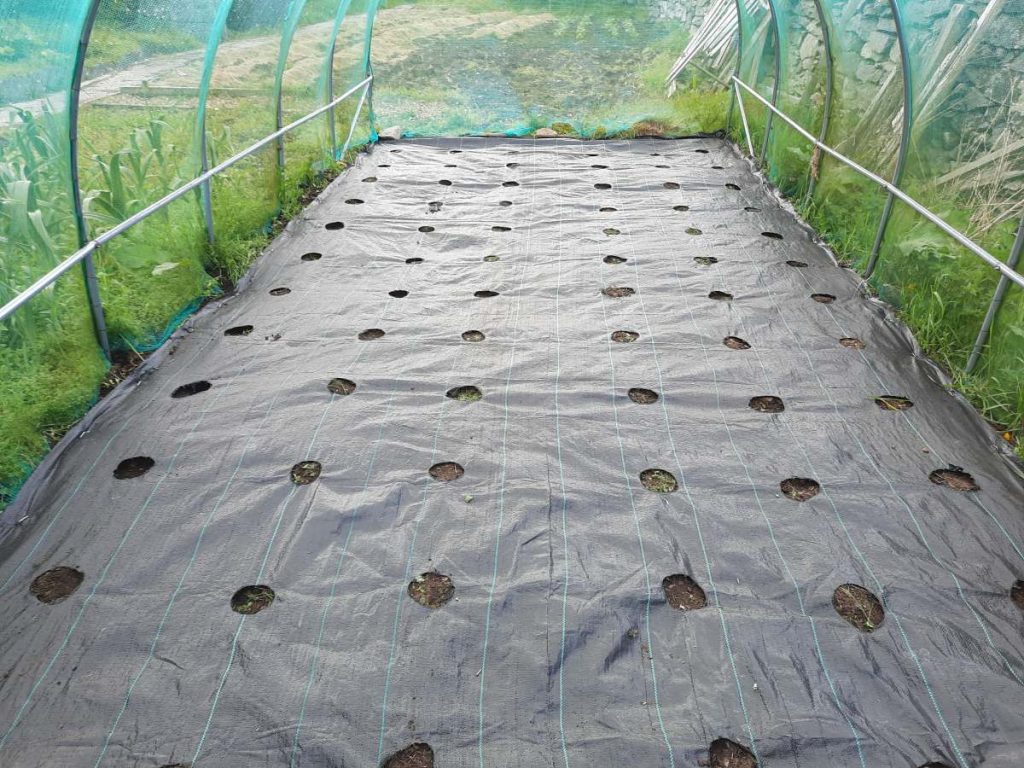 I like to bring my brassicas on in pots prior to planting out. To minimise root disturbance – which doesn’t really matter too much with brassicas – I use a bulb planter to make a hole and then pop the plant in. 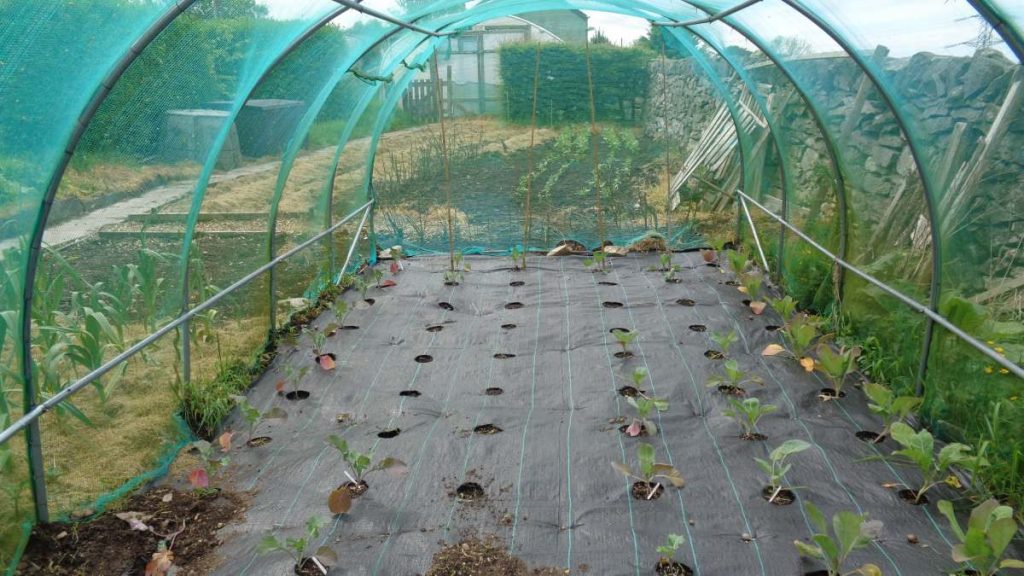 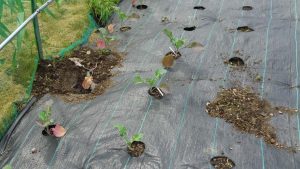 Perhaps a mole under the membrane

I’ve defeated the weeds, kept the birds and butterflies at bay but nature had another trick. A mole under the matting!

I think it’s a mole as a couple of plants were pushed out with a pile of soil. Not a massive problem but an irritant all the same.

Basically I shouldn’t need to spend hardly any time on cultivation until harvest time.