I’m trialling the Soilfixer 1,000 litre compost bin which is from the same person, Tony Callaghan, who invented the Hotbin which I have. It’s 5 times the capacity of the 200 litre Hotbin and aimed at handling garden waste rather than a mix of kitchen waste and green waste. 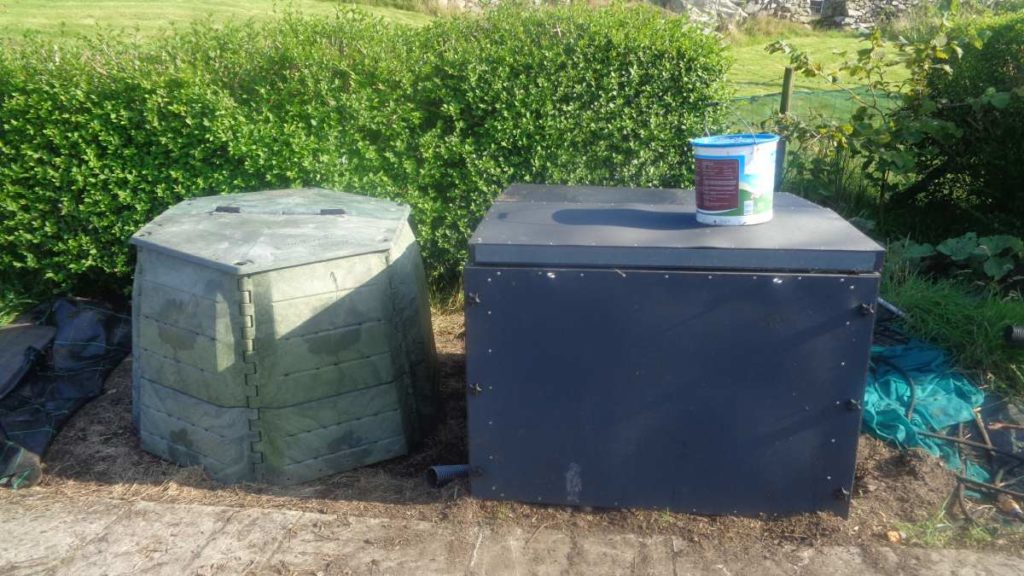 Initially I filled it with a mixture of garden waste, chicken manure, some cardboard, wood chippings to add browns and keep the mix open and privet hedge clippings. I added the Soilfixer compost activator as I filled the bin. The privet went in first as, being twiggy, it would allow air to flow up into the compost. The bin sits directly on the ground and the air goes in through a soaker hose.

After loading the bin heated up to around 45ºC where it hovered for a bit and then fell. Ideally I want a temperature of 65 to 70ºC for a week or two which will effectively kill off weed seeds and pathogens.

I tried mixing in situ and opening up with an auger but having cooled it wasn’t moving. I also added a biological activator in 5 litres of warm water to no avail. Since I wasn’t supposed to lift or strain, I got a pal to help and we emptied the bin completely. 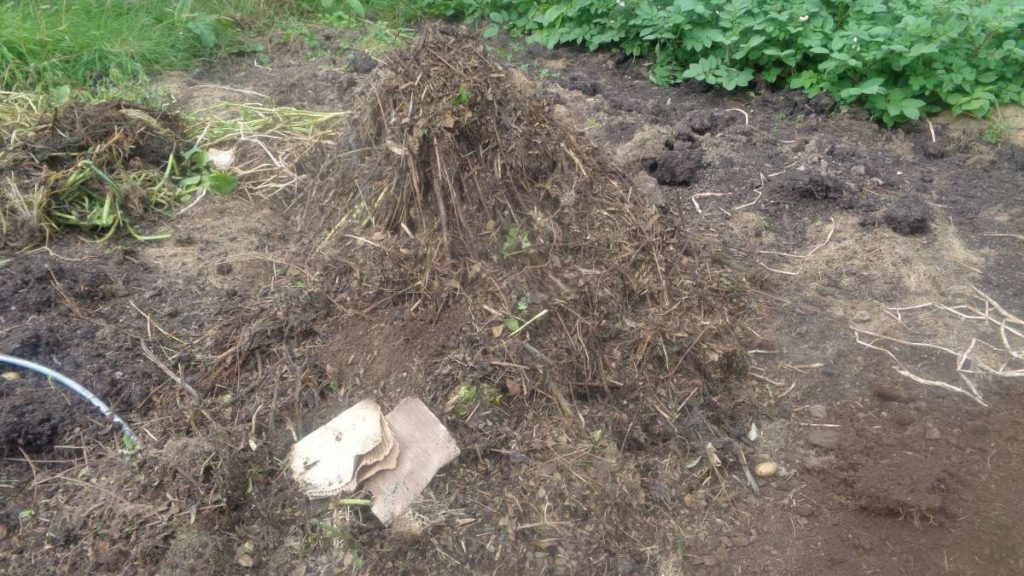 First the most recently added, undecomposed material was taken out and piled up separately. The rest of the bin was quite well rotted down but there were still some bits of cardboard, clumps of grass clippings and the thin wood twigs from the hedge clippings.

The part composted material was very dry – bone dry in fact. The top had been quite wet so this was a surprise. Of course the bacteria can’t do their job when it’s dry so that’s part of the reason it wasn’t heating properly. Thinking it through, the excess liquid released by decomposition would draining directly into the soil below. In the enclosed Hotbin these liquids tend to be retained for the most part. In fact most of the problems I’ve had with a Hotbin are due to excess liquid. 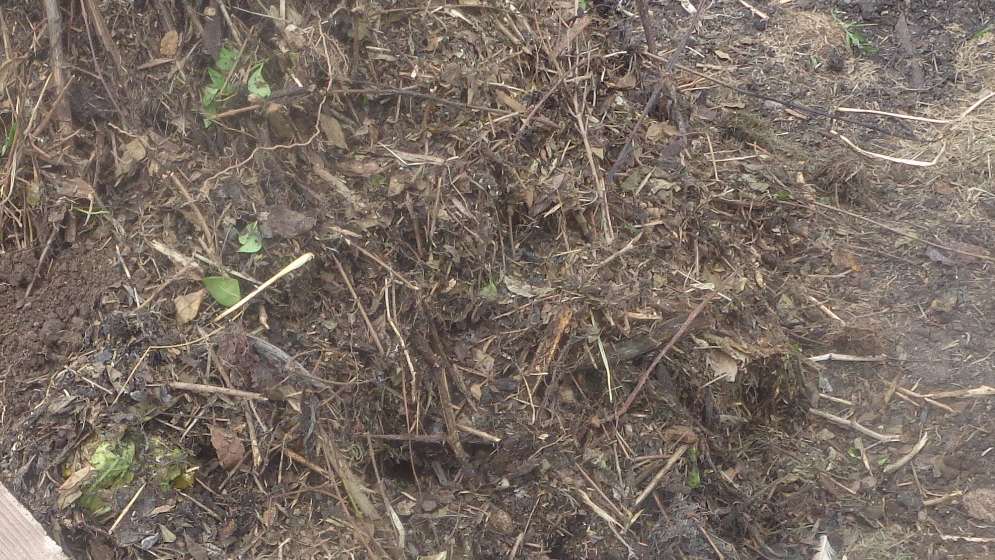 Apart from being too dry, I’m convinced the main problem is lack of oxygen to fuel aerobic composting. The soaker hose just doesn’t let enough air through to fuel the reactions. Incidentally, one of the hoses was accidentally split off when we emptied the bin. 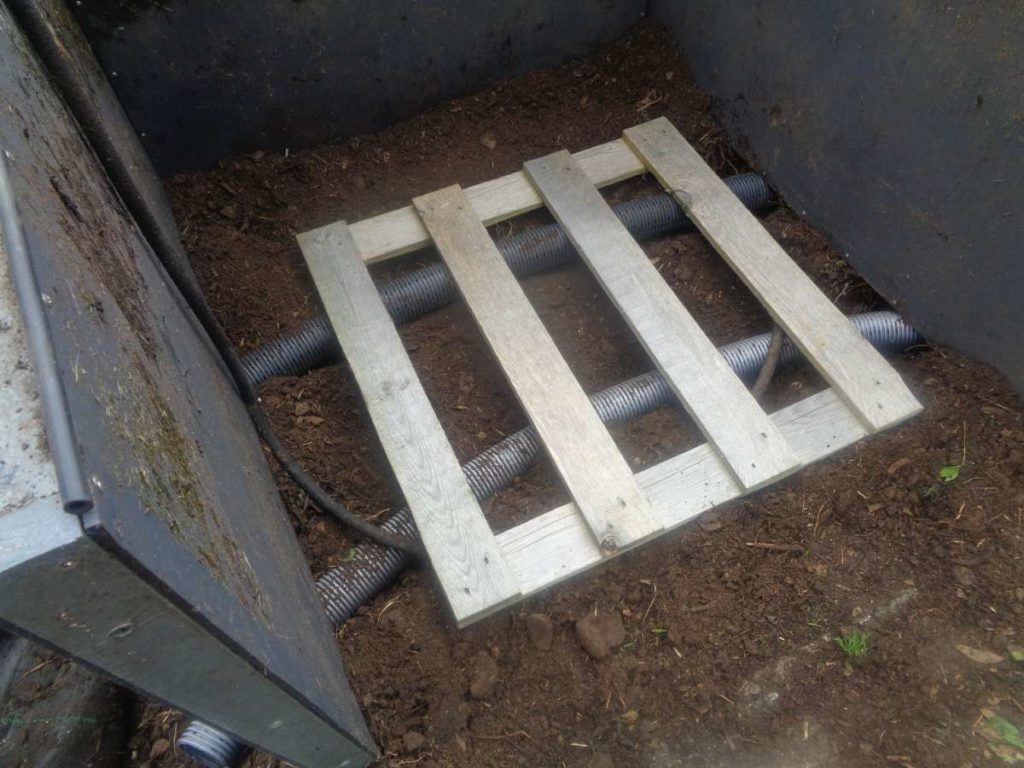 In the past I’ve built channels from house-bricks at the base of a heap and then covered with a layer of thin sticks and brush. This certainly works to allow enough air through. I considered raising the bin on bricks and using a layer of weldmesh sitting on those to provide the oxygen. However, that would open the bin up to rats. I don’t find them a problem with a green waste composter and in any case, we’ve some good hunting moggies if a rat shows up, but not everyone does.

It may be possible to keep it secure and provide enough air by using pipes. I’ve got some spare land drainage pipe which has a lot of small slits in which should do the job. We made two trenches and laid the pipes in them. Over the pipes I laid a small single tier pallet to stop the pipe getting totally blocked. 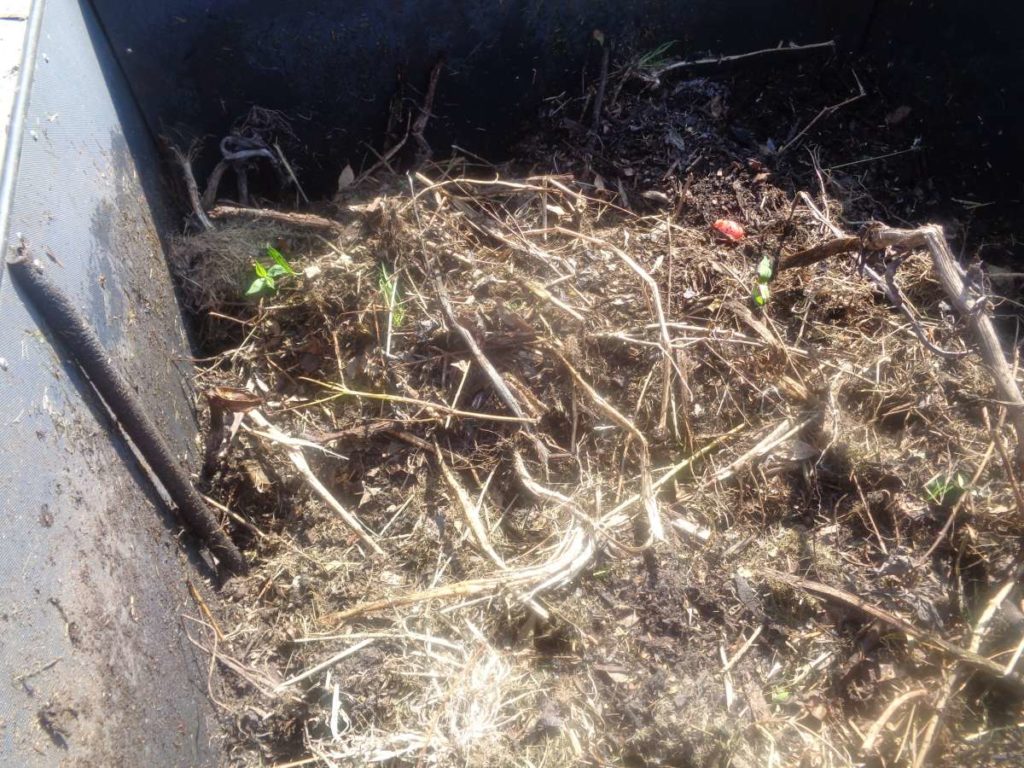 Next we re-loaded the bin. This went in layers. Because it was very woody and bone dry, each layer got a sprinkling of urea (40% nitrogen) to fuel decomposition and watered. The un-decomposed green waste went in last with some shredded prunings from a bush.

Now it’s just a matter of seeing what happens..