Automating temperature control is really useful with a polytunnel or a greenhouse. This is especially true where the owner cannot get to the polytunnel when the sun comes out. This takes things one step further and controls watering as well as ventilation / temperature.

Back in June I posted about my experiment with a solar-powered cooling system for the polytunnel. It is very simple, a car radiator fan linked directly to a solar panel. The more the sun shines, the hotter it gets and the faster the fan runs. However, whilst it cures the humidity problem, it doesn’t pull enough air through to cool the tunnel enough. I’ve a larger solar panel and 2 high power car radiator fans on order. More on this soon.

Anyway, I was feeling quite high-tech when I received this piece from Norman Dickinson who is the Southern Branch Chairman of the National Vegetable Society. My pride cometh before the fall! 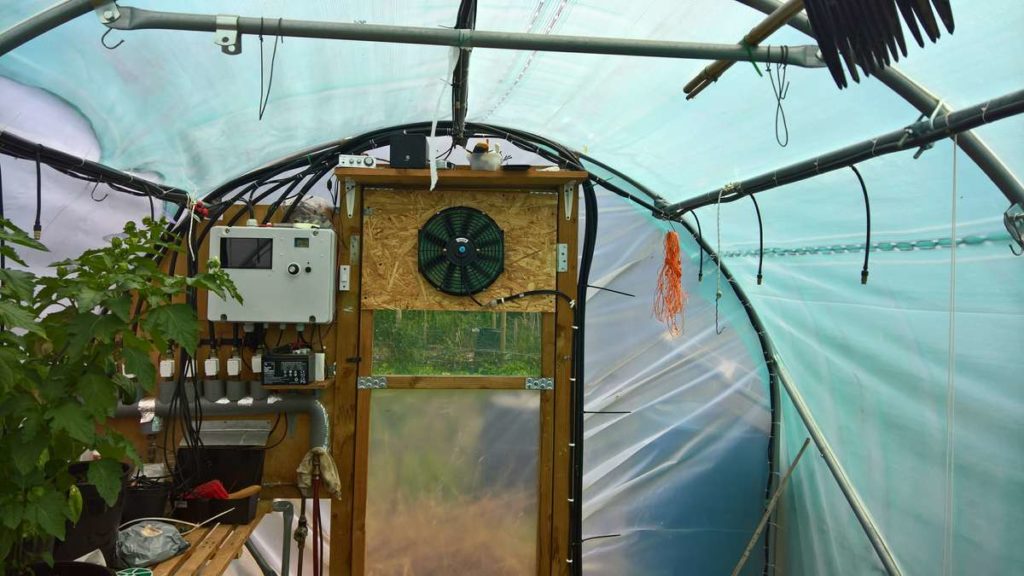 In response to your Polytunnel Temperature Control piece in your July Newsletter, I was suffering the same problems with my 20’ x 8’ tunnel on my allotment. As I tend to use solar power down there for a number of things I decided to purchase a 12v 80W fan and 100W solar panel to overcome my problem. 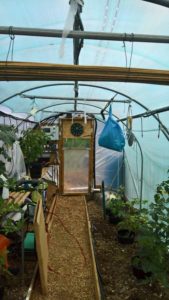 View Down the Polytunnel

With the blazing temperatures that we have experienced recently the fan was running at “90 MPH” introducing some welcome “breeze”. You will see that I have set the fan in the door vent screen and with the little “tell tales” hanging I get air flow right to the other end where I tend to leave the door open. I have attached a couple of photos showing the install where you can see the “tell tales” hanging from the ridge bar.

The control panel to the left of the fan is part of my computer controlled irrigation system, which uses a Raspberry Pi computer running from 12v batteries and solar panels.

There are 8 irrigation zones and it uses a 12v 5l/min pump with pressure switch and 12v solenoid valves for water distribution. There are also soil moisture sensors to monitor when areas require watering and there is a flow sensor in-line to measure the volume of water being delivered to each zone.

I am still finalising the software, so at present irrigation commences at a pre-set time each day and delivers water for a set time period, based on trial and error.

Water storage is from two connected 200 litre plastic drums giving a 400 litre water supply. I can also manually irrigate each zone using the rotary switch on the panel plus also activate the connected hose pipe by pressing the black pump over ride button.

It is all very much in the testing stage at present but expect to have a fully automatic system ready for next year.

With the smaller tunnel, I have been hitting maximum temperatures of 30-31ºC with similar outdoor temperatures that you have been experiencing. If you zoom in on the long view photo you will see my temperature logger hanging on the left hand side of the crop bar. 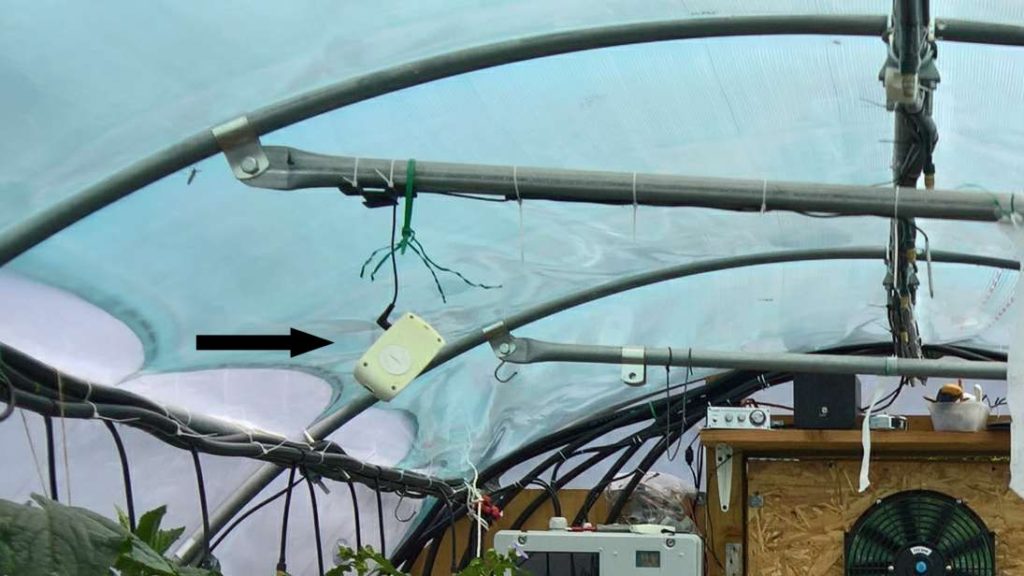 In the middle right on the ridge, again zoom in, on a temperature sensor which will be connected into the system to activate the ridge and/or perimeter sprays when the temperature also gets too high. At the moment I do ridge and perimeter cooling sprays manually using the rotary switch. 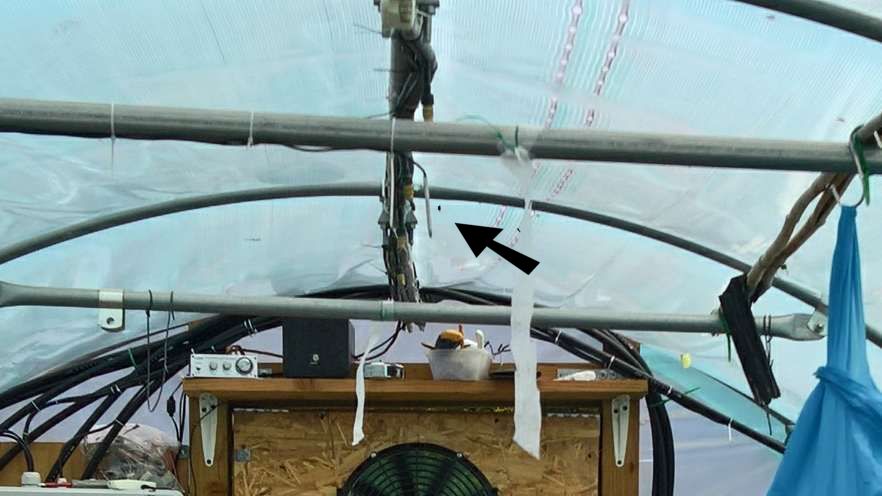 I have attached some detailed photos. 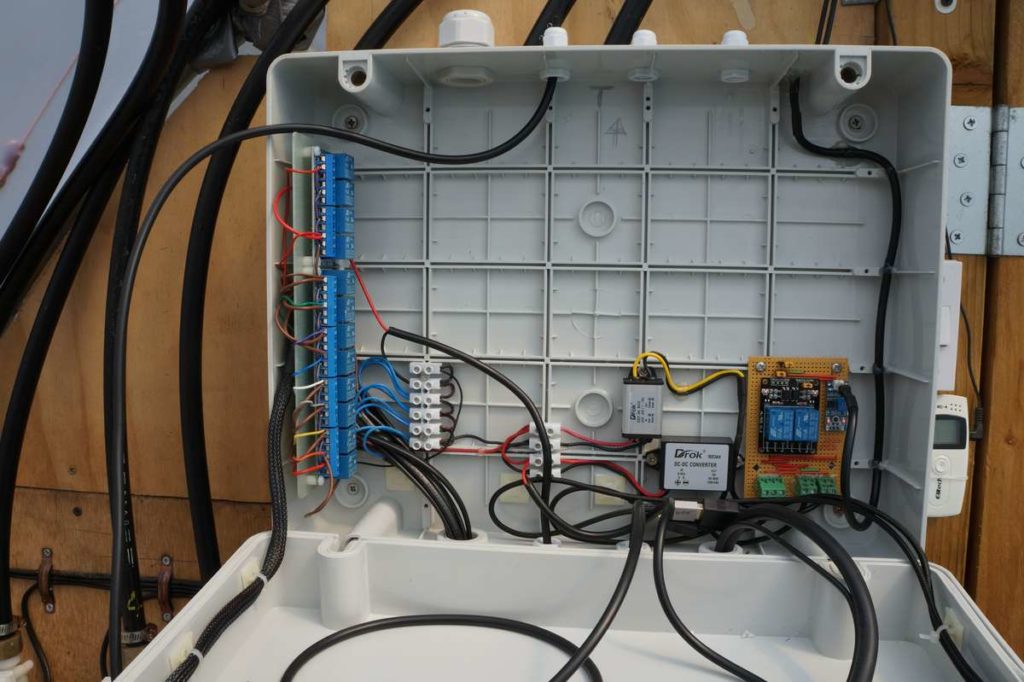 472 is of the internals, without internal interface as yet. The small panel at the bottom right is a light sensor. This automatically shuts the power off when the light has been lost, thus saving battery power. The Raspberry Pi computer automatically boots up into the irrigation programme when the light levels are high enough to charge the batteries. 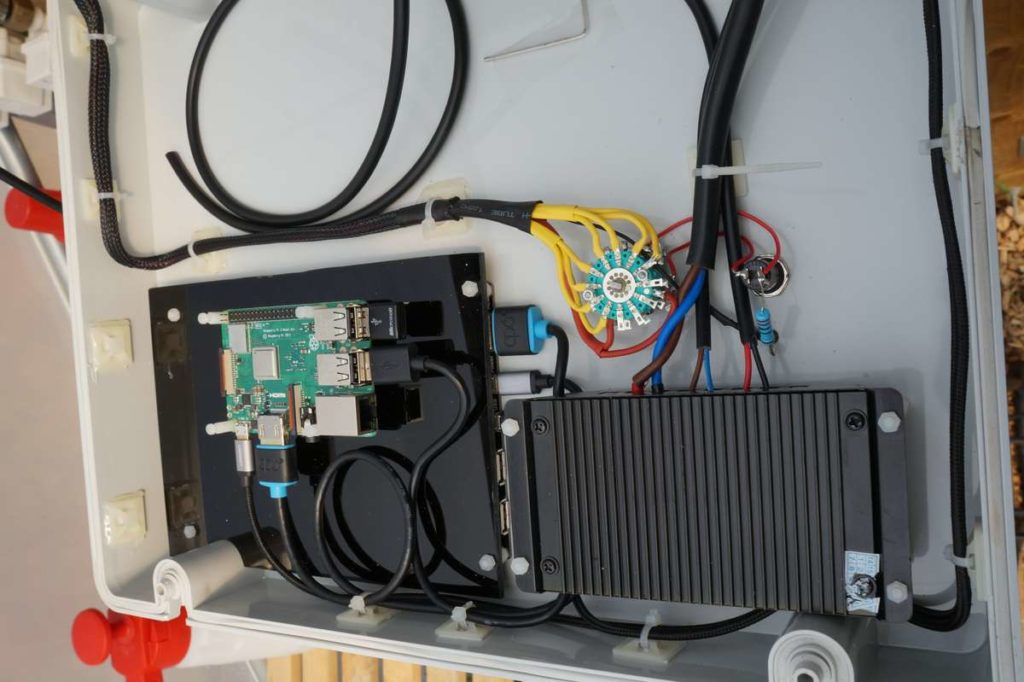 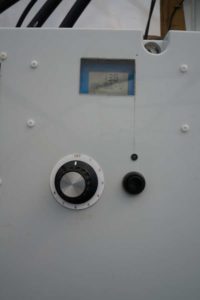 Once everything is tested, then I shall get a circuit board manufactured as the interface between the various outputs and sensors, including weather station data, and the Raspberry Pi.