Polytunnels, like greenhouses, can get very hot in sunny weather. Controlling temperature and humidity is critical though and I’ve tackled the problem of polytunnel ventilation by installing a solar powered cooling system. 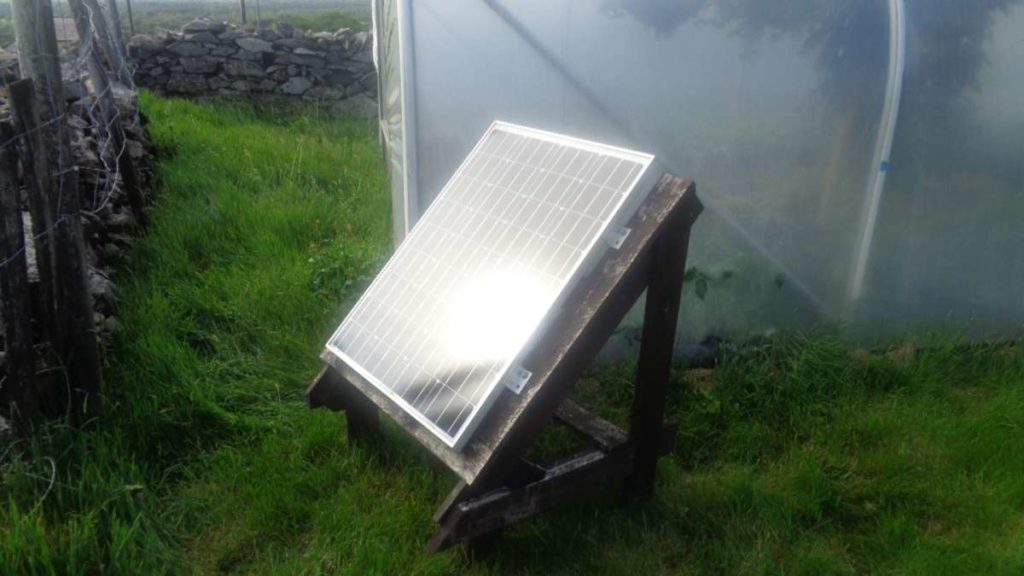 I was working in the polytunnel the other day. The weather was overcast with sunny spells and it was quite a cool day. The thermometer was hovering around 15ºC outside and a comfortable 22ºC inside the tunnel. Out came the sun and the temperature quickly climbed towards unbearable in the tunnel so I opened the door to cool things down.

Then the sun went back in and the temperature plummeted in the tunnel until I shut the door. Well this went on most of the time, me opening and closing the door to keep the temperature comfortable. I thought “There has to be a better way!”

The opening lights in the greenhouse are controlled by automatic openers. Being in the roof, the hot air rushes out and keeps the temperature reasonable. I considered constructing opening lights and fitting them into the polytunnel roof but quickly ruled that out. Putting any sort of vents into the polytunnel roof would compromise the integrity of the skin. Not something I’d like to experiment with here, our high winds are just looking for an excuse to shred the polythene.

First Tunnels, who supplied my lovely tunnel, offer a number of ventilation solutions. On the smaller domestic polytunnels the doors incorporate netting instead of polythene into the top panels. Mine is the smallest of the commercial tunnels and netting is not fitted into the doors as standard. I assume that’s because there’s always someone around to open the doors in commercial operations.

I could easily replace one or more door panels with netting to allow airflow but that may reduce heat retention in cold weather. It will help reduce condensation though, which is a problem in the tunnel.

First Tunnels offer side ventilation systems with or without a screen. See their video explaining these at the end. This enables temperature and humidity to be controlled. For a large tunnel, over say 30 feet long, I’d suggest side ventilation is a must and it’s not a bad idea for smaller tunnels either. It’s not an automatic system, though. What if the weather changes and you’re not there?

This leads me to a cunning plan! What if I fitted an electric fan in one door panel? This would pull the air through the tunnel and certainly cool it down in sunny weather. I’ve not got mains power handy so it would have to be a 12 volt fan.. like a car radiator fan. 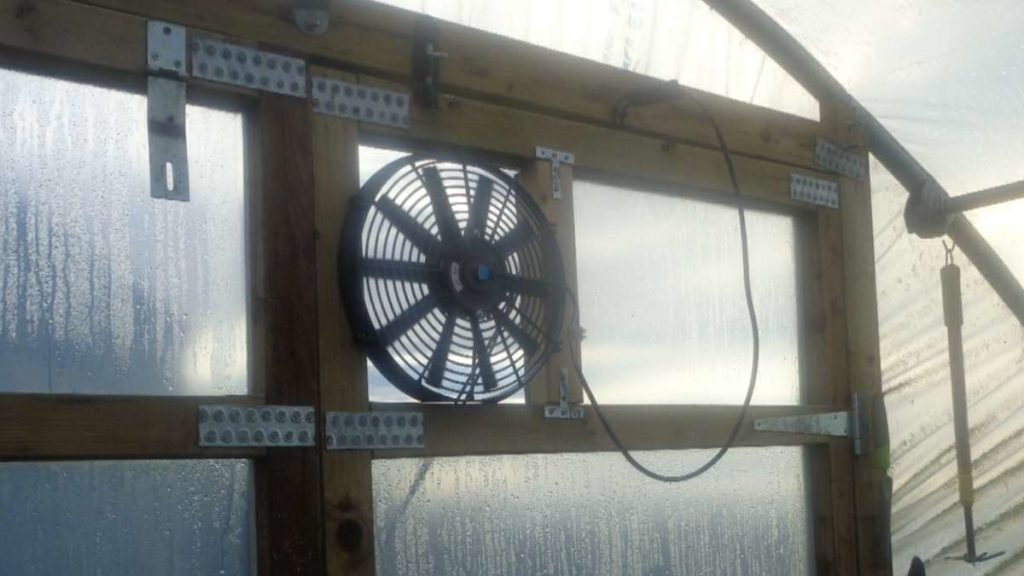 Fitted Polytunnel Cooling Fan – the slack cable allows the door to be opened if needed.

Checking on ebay, a car radiator fan can be had very cheaply, I saw one at £12.50 but £30.00 is a more reasonable budget. Only thing is they usually draw 80 watts. An 80 watt solar panel to power it costs around £70.00 . Still, it’s a investment that should last for years and four automatic window openers in a greenhouse will set you back around £100.00.

The fan speed will be controlled by the solar panel’s output. More sunshine giving more power and turning the blades faster and so forth. The hotter the weather, the more it will cool.

Help from My Friends

I admit I’m a bit out of my depth with the fan plan, so I discussed it with my neighbour who is a whiz with electrics and has set up solar panel systems and windmills. He reckoned it would work as I hoped. His only proviso was that the fan needed to be a simple one, not the more complex type some cars have that are designed for computer control.

More than that, he appeared with one which they had spare and it will do the job. Then he excelled himself, mentioning they had an 80 watt solar panel I could have. Even better, it was fixed to a frame with a long cable attached! Am I lucky or what?

Installed, Up and Running! 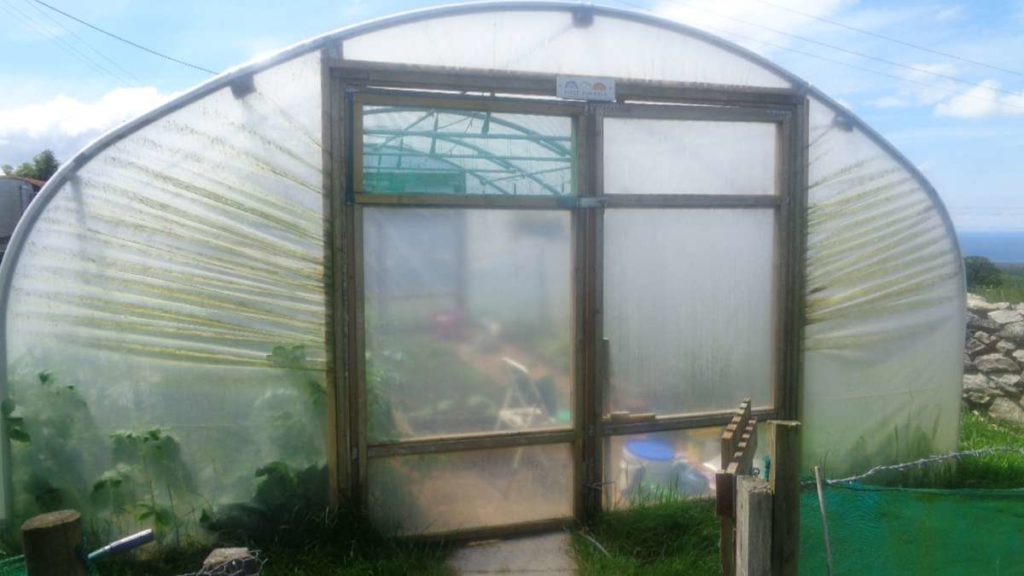 We positioned the panel and connected the fan which immediately came to life, speeding up when the sun came out. All that remained was to install it in the door and put the netting vent in on the door at the other end.

After 24 hours the humidity had fallen noticeably, so one aim achieved. We’ve not had enough sunshine to fully test out cooling effect yet. I think it will still be necessary to open doors on hot days, but we’ll see.