I’ve a few compost bins scattered around. There’s a big set of 4 built from wood in the field plots, a pair of bins made from pallets in the walled veg plot and a couple of plastic bins. One of the plastic bins has the chopped leaves to make leafmould in and the other is where we dump used potting compost until ready to spread it on the plots. 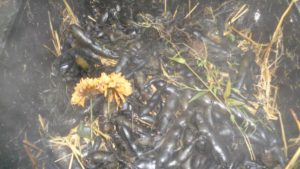 Broad bean pods inside the hotbin composter after a day. The photo is blurred due to steam rising from them.

I’ve also got a hotbin composter which I use for kitchen wastes, perennial weeds that can regrow and weeds in seed. All of those things can be a problem in compost if it hasn’t ‘cooked’ properly. So long as you add plenty of ‘browns’ to balance the ‘greens’ the hotbin zooms up to 60ºC plus and kills the weeds and their seed.

When the hotbin is at full tilt it’s like a cooker – the photo is of broad bean pods after less than a day in there. They’ve turned black and are well on the way to becoming a good rich compost.

You do have to watch it with the hotbin, it can have trouble heating up when full of finished compost below the rotting material. Easily sorted though, empty it out. Use the finished stuff as you will and pop the rest back in. There is a cheat when you haven’t time to do that – mix it up and poke some holes down. Often that’s enough to get it going until you’ve time to empty it.

Up in the field plot I’ve a 4 bin compost system. It is sadly underused as I built it before realising the field was not the right place to concentrate my growing efforts due to the wind. In ten years the windbreak trees I’ve planted will be developed enough to make a big difference. I just hope I’m around to see it.

How I make compost 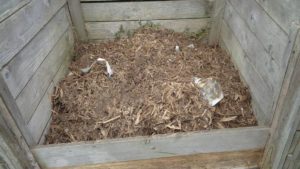 Layer of chicken litter in the compost bin

I thought it might be useful to run through what I’ve done. I’ve started a new bay with the un-rotted material from the top of the finished pile over some brassica stalks. Next a layer of bark peelings from the chicken run. Not exactly a brown as there’s quite a lot of nitrogen rich droppings mixed in there.

Chickens are so productive – you put feed in at one end and they send out eggs and fertiliser from the other. Old time farmers valued poultry highly due to the value of the droppings on the land.

Then a layer of annual weeds and the broad bean haulm. Next comes a sprinkling of lime to keep the acidity down which improves microbial action and makes sure the finished compost isn’t acid. A slight hitch to this step, one of our cats having decided the heap has now become the perfect sleeping spot. 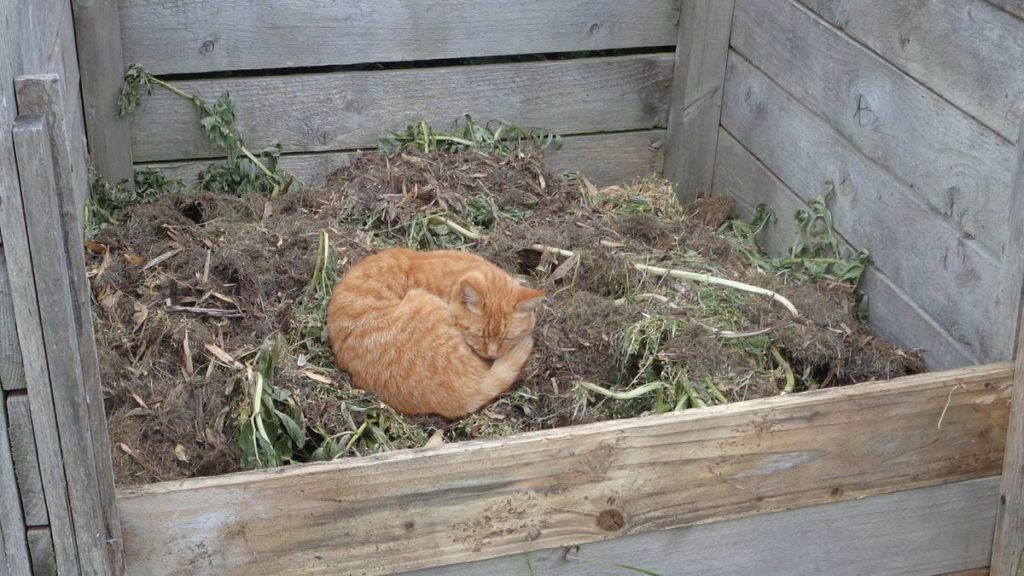 Our cat Willow sleeping on the compost heap

Then a good thick layer of comfrey. I’ve a big comfrey patch and whilst near everyone knows it’s great for making a liquid feed, many people don’t realise it is rich enough to make a compost activator – almost a manure of itself. Then another layer of chicken run litter with another sprinkling of lime.

Having built the heap, nothing is going to happen due to it being bone dry. Normally there’s more than enough moisture in the material to get a compost heap started but not in this heatwave, so a good watering .

With a little luck it will start to heat up due to bacterial activity and halve in size over the next week or two. With the chicken litter and comfrey I think this will get going but if it doesn’t seem to be heating then I’ll add some magic activator – AKA 1:10 diluted urine or sprinkle a handful of sulphate of ammonia.