We actually had some rain. Not a lot, about 15 mm or half an inch, but enough to freshen things up and help sustain the garden. It came down slowly, it drizzled most of the day, but that was good. Because the ground is so hard and dry, the slow rate let the water soak in and soften the soil. If we’d had a short thunderstorm or suchlike the water would have just run off the baked ground rather than soaking in. 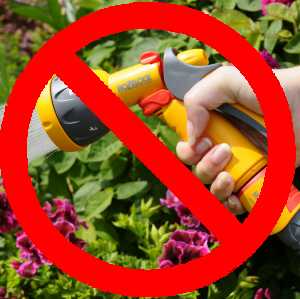 There is currently a hosepipe ban in Northern Ireland and now United Utilities have announced a hosepipe ban starting on 5th August unless we get some significant rain soon.

Sky News reported that Professor David Hall, a water industry expert at the University of Greenwich, said privatised water firms have an incentive not to fix too many leaks as it begins to eat into profits and becomes uneconomic.

Around 20% of water processed is lost to leaks. According to the Guardian;

…many companies in the parched south and east of England have been set leak reduction targets for 2020 of zero or even targets that could allow leakages to increase. Critics blame a system where it is “cheaper to drain a river dry than fix a leak” and say it is unfair to place the water saving burden on customers while 20% of all water leaks out before it even reaches homes.

There are articles on the site that will help you cope with keeping the plants going in a hosepipe ban.

This seems to be the year of the horsefly. Last year I got bitten a couple of times but this year loads. Up in the polytunnel I finger flicked and killed three that landed on my arm not realising there were a couple sucking my blood from my feet.

The horrid things are heat seeking missiles. They see in infrared and pick out warm bodies to home in on. They can fly at 15 mph which is a little bit faster than I can run! Once the target is reached they gently land and their super-sharp jaws slice into the skin whilst injecting an anti-coagulant so that the blood on which they live runs freely.

I apply anti-histamine cream to their bites which helps a bit and I’m taking anti-histamine pills for hayfever anyway but nothing seems to completely stop the itching apart from time. Scratching doesn’t help, in fact it seems to make the itching worse. Cold water or an ice cube does give some relief though.

And if you have a strong stomach, there are pictures of the effects of horsefly bites here. Warning, they are a bit grusome.