I’d got some French bean seed that was two years past the sow by date so I popped them into some rootrainers and a deep module tray expecting them to fail. Well I got a very good germination rate which was a nice surprise. So up to the plot to plant them out. They’ve gone into the new side border which is being brought into production this year.

There had been a bit of slug damage when they were in the modules. Not expecting much, I’d just left the modules by the greenhouse. Really should have moved them off the floor but such is life.

Anyway, whilst I was planting them out I opened a root trainer to find a clutch of slug eggs in there. Two minutes after the photo was taken they were very, very squashed. 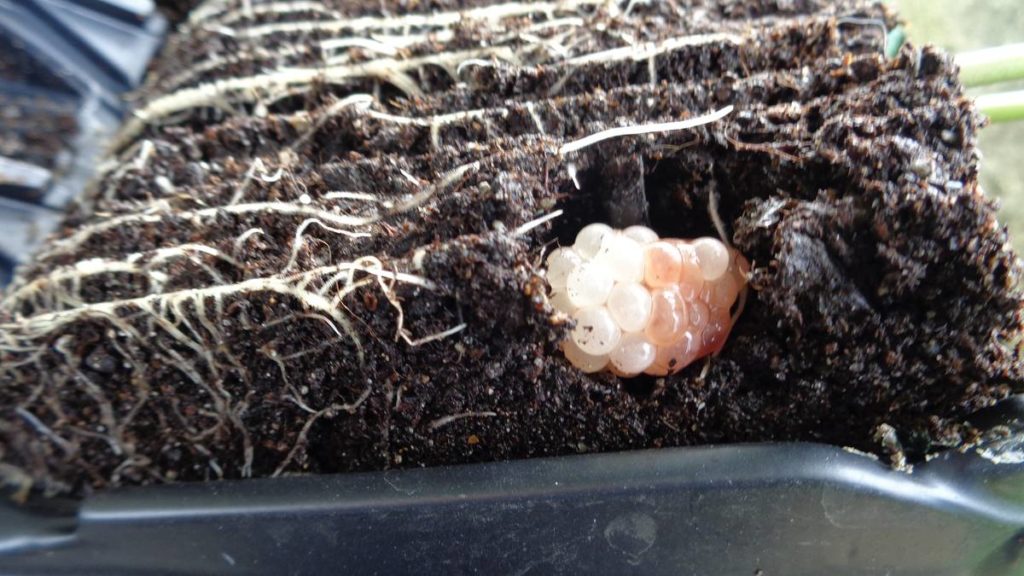 The garlic having dried, it’s now hanging in the food store, the drying rack was free for the autumn onions. Quite a few had been lost due to the weather but at least we’ve more than enough to carry us through until the spring planted sets are ready. The way they’re going, it won’t be long.

I realised we’ll need another drying rack so knocked one together from some bits of wood and chicken wire I’d got hanging around. It actually took longer than I thought it would, mainly because of hunting around for the bits. 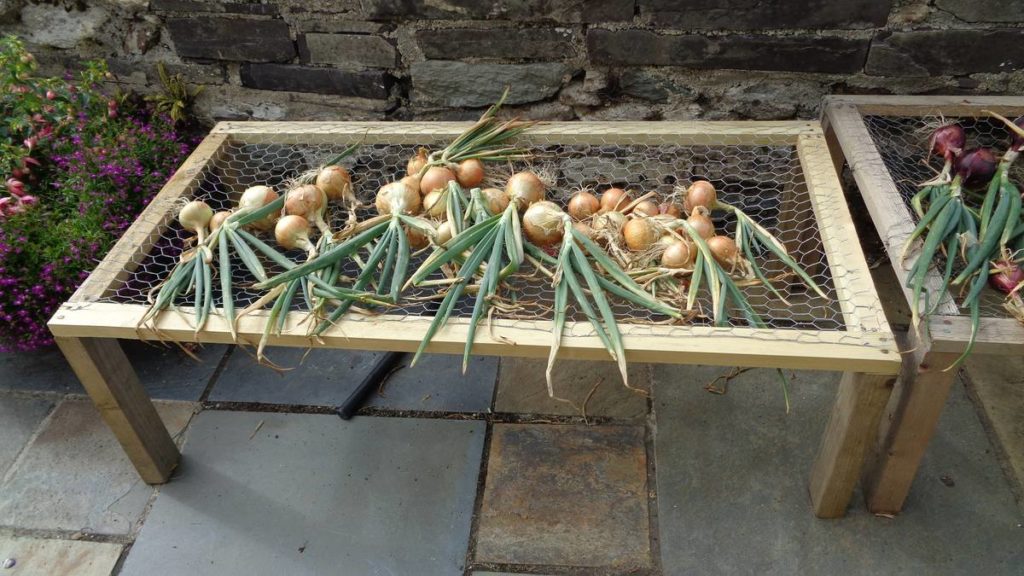 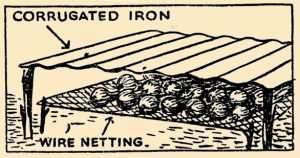 The old rack, which is about 10 years old is getting a bit rickety so a few repairs to make when I get chance.

My August 1945 Dig for Victory Guide suggests a rack under a sheet of corrugated iron. The corrugated iron shields the crop from rain and it heats up in the sun to warm and dry the onions below.

There was a bunch of three large tomatoes pushing against each other which has caused one to develop a very peculiar shape. I don’t think it would have met a supermarket’s quality test but it certainly met our taste test. 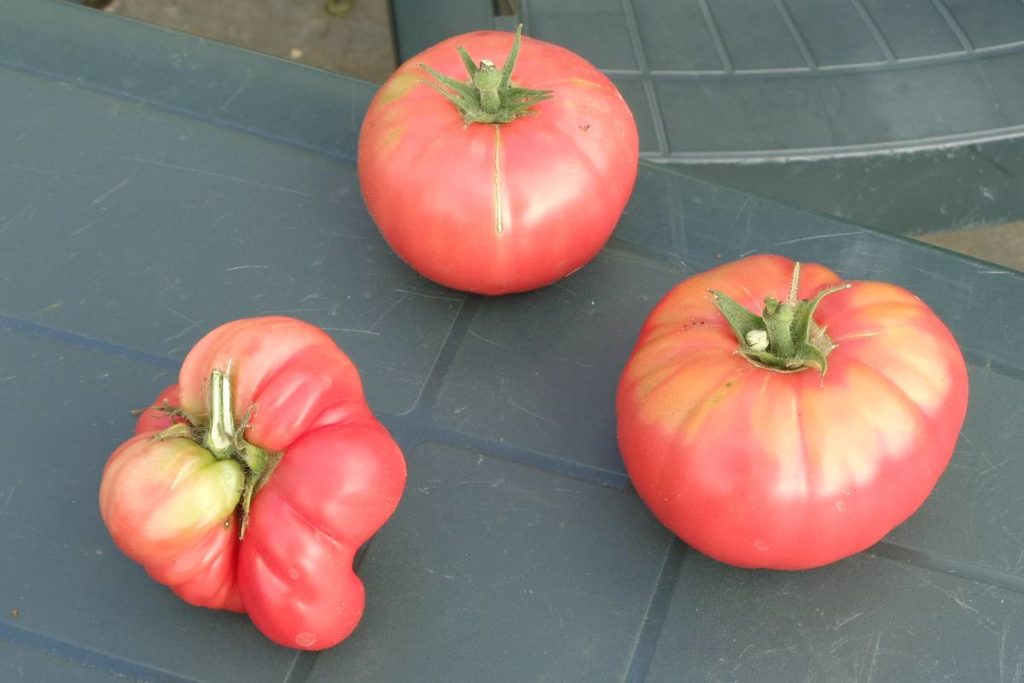 Parsley has a well deserved reputation for being difficult to germinate when sowed directly (see tip) but the easiest way is to sow in modules undercover and then plant out. I’ve put a short row in front of the French beans in the walled veg plot.

I’m doing a few pots of parsley as well. Parsley used to be more popular in the past than it is today. I don’t know why it lost popularity as it does complement so many dishes. It’s pretty good for you, too. High in vitamins K, C and A, antioxidants and essential oils.

I’ve planted out the basil in the polytunnel. They too were started in modules. I’m a little behind with it, ideally it should be just coming ready to start picking when the tomatoes start ripening. No biggie, basil is pretty fast growing.

This year I decided to try something different with my parsnips – start them undercover and then plant them out. Like carrots and other root crops, transplanting isn’t recommended as it usually results in the roots going all over the place, if they take at all.

I wavered between paper pots, toilet roll tube inners and root trainers but after comments from readers went for root trainers. It was fiddly planting out but they all seemed to take well and the foliage is fantastic. However, the question is how are the roots doing?

I could dig one up and take a look but that’s a bit of a waste as it won’t be fully developed for months yet. But, when I part the foliage you can see the crowns. If they live up to the promise of the foliage and the crowns, these could be the best parsnips I’ve grown. Not show standard, but they’re for the table. 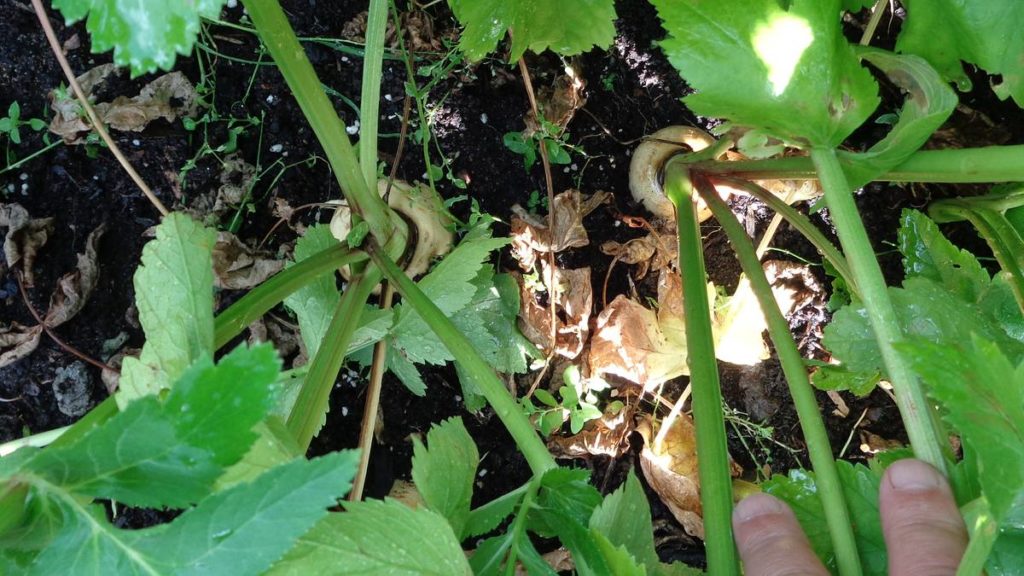