In the Potting Shed, Broad Beans, Setting up the Greenhouse

Not the best start to my sowing plan. What with snow, thaw, snow, wind, rain, gales, more snow and even some work getting in the way I’ve not been going outside too much. On the plus side, it’s quite cosy in the potting shed when I do get out – especially with the heater taking the chill off. 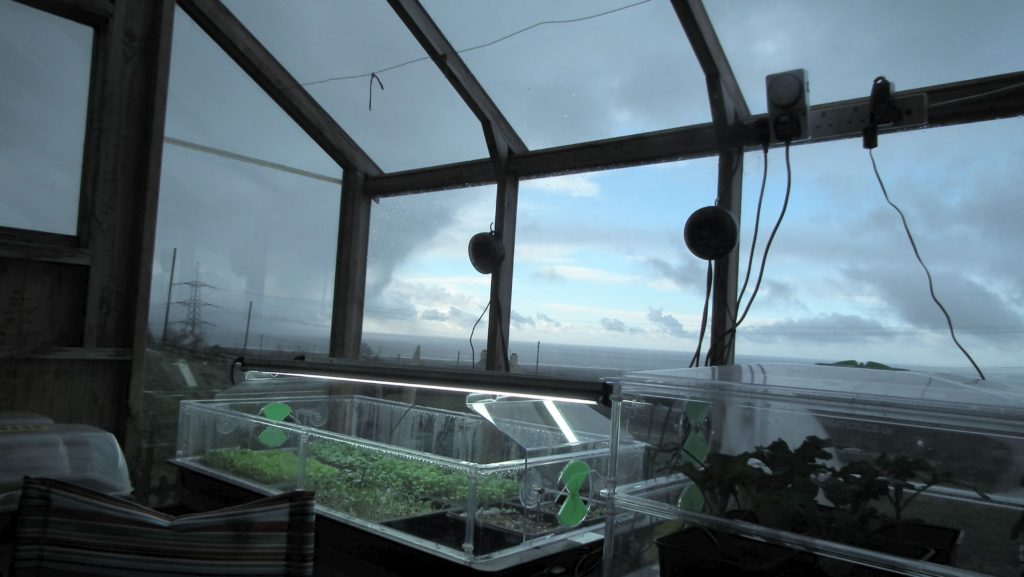 Sea View from the Potting Shed

I must admit to being incredibly fortunate to have a potting shed that looks over to the sea. The photo doesn’t do the view justice. Most of the sky was grey but for a small blue patch.

I was in the shed as night fell and found myself looking out across road where my neighbour’s shed lights were on. His ‘shed’ is more of an outbuilding and he uses it for lambing at this time of year. He was still going strong in the maternity ward as I switched off and headed inside. Around now he’s often in there during the wee small hours of the night, 2 and 3 o’clock. At least growing veggies isn’t as demanding as being a sheep farmer.

The reason I was in the shed was that I was starting my first lot of broad beans of the year. These are Aquadulce Claudia which are recommended for autumn sowing really but still do well if you get them in early in the spring.

Direct sowing outdoors is generally better with legumes in that they don’t get a check as they do if they’re a bit potbound when planted. But if you get them planted out early enough they’ll do just as well.

At this time of year the soil is still cold and they take a lot longer to germinate. Because they take their time germinating, there is longer for them to rot off and in our wet climate we’d be lucky to see much more than half of them appear.

Germinating under cover means they’re warmer and not drowned so they appear faster. By stacking the pots in trays inside one of the Vitopods I can give them the optimum temperature of 12°C. That’s better than I can get in the greenhouse or the coldframes when it’s just 2°C outside.

Once they start to show I’ll move them into the coldframe for a few days before they’re thrust into the hard cold world. There are other benefits to starting in pots; no spaces in the rows to fill and they’ve got their roots going in the best possible medium. I just use a cheap potting compost which works out at just under 5p a litre and for 62 plants I used about 50 litres.

One little trick I use with peas and beans to get good germination is soak them for a few hours in water at room temperature. Water straight from the tap is probably around 5ºC but if you just leave it in a jug overnight it will be at room temperature. Letting it stand also allows any chlorine to evaporate off. Or you could use water from a butt and bring that inside. 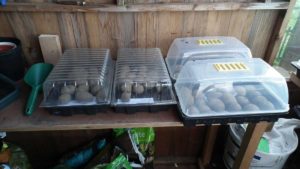 Sowed 2 varieties of Swiss chard; rhubarb and custard rainbow into modules. Popped 2 seeds per module in which I’ll thin to one and then plant out in the polytunnel when established.

The potting shed is quite quite a hive of industry what with seeds germinating, microgreens in the Vitopod with grow lights and the seed potatoes chitting in seed trays covered with propagator lids. The lids are just to protect them if it gets really cold at night and the temperature falls too low.

The sparkly clean greenhouse is tidy and the propagators set up. I’ve got a thermostatically controlled heated base that takes 4 seed trays and 2 ancient heated propagators. I’m controlling those with a thermostat like the ones on the Vitopods. 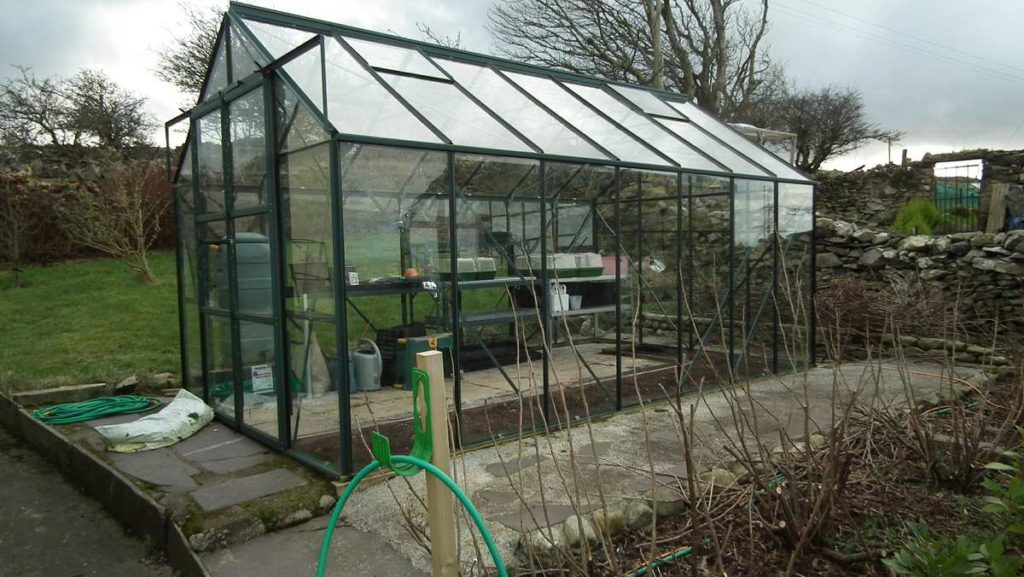 I had planned on getting them working on Sunday and was just about ready to start sowing more seeds when my neighbour appeared. Val had been trying to phone me but as I was in the shed I hadn’t heard the phone ring, so she rang my neighbour. The car had broken down in town. He gave me a lift and we rescued the damsel in distress with the aid of some jump leads. The battery was shot.

One comment on “In the Potting Shed, Broad Beans, Setting up the Greenhouse”

Leave a Comment Here on In the Potting Shed, Broad Beans, Setting up the Greenhouse Cancel reply