My last posting covered up to Sunday night. Monday was spent indoors, mainly because a cold had kept me up half the night and I felt half dead. I can’t really say I got much done that was productive.

So plans were laid for the Tuesday. Haha. The weather forecast was for rain but I awoke to a white world. It was coming down quite heavily and there was already a couple of inches lying.

Still, some tasks can’t be put off whatever the weather. On with my hooded winter jacket and up to let the chickens out of the coop for breakfast. Queen Charlie who is always first out in a morning stopped at the threshold and surveyed the world with great suspicion before deciding to risk coming down. 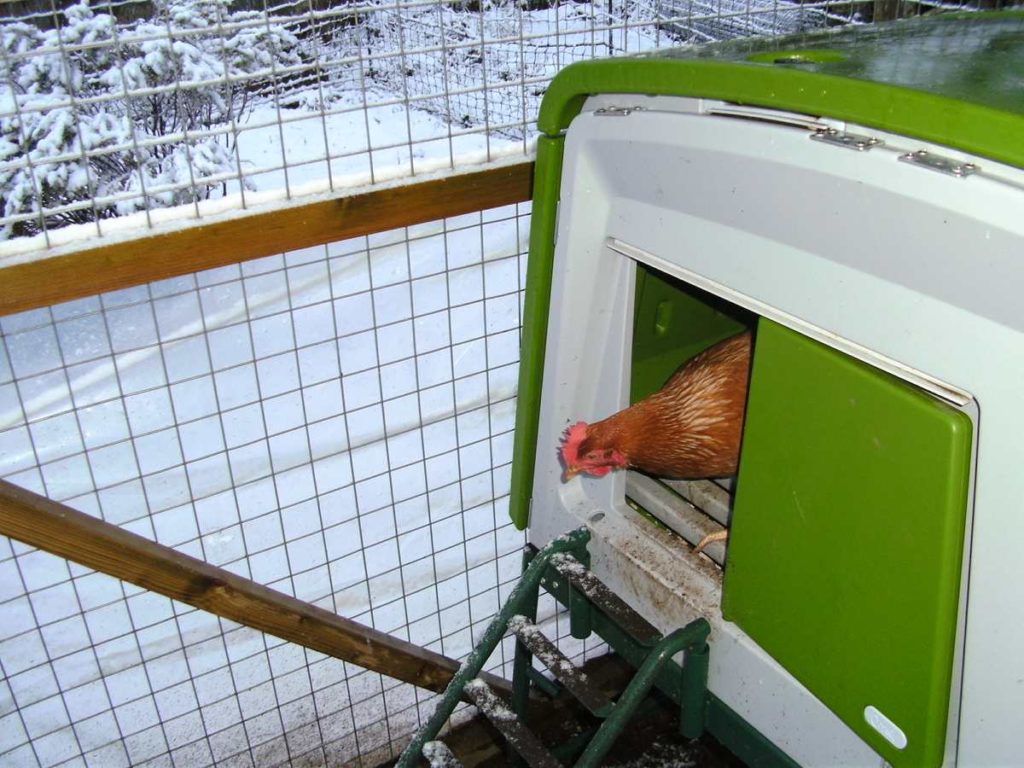 Being as it was cold and miserable I decided to give the hens some corn to keep them happy so back down to the ex-pigsty shed for a mug full. I stood just inside the pig-stye shed’s door looking down at the potting shed in the snow and snapped the next photo. It looked very homely with the bright grow-lights shining out. 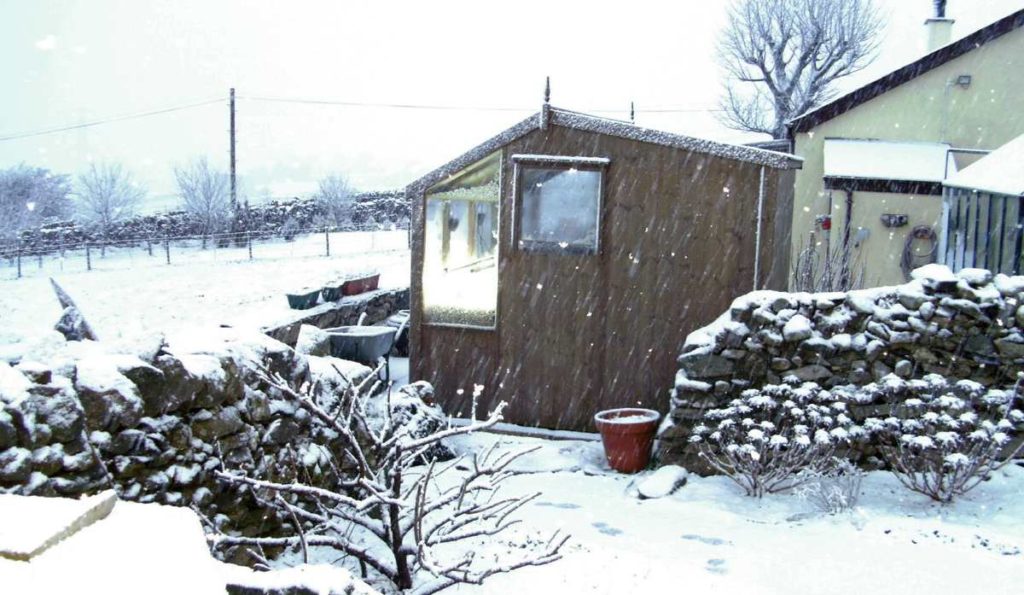 Potting Shed in the Snow

Gave the hens their corn underneath the Eglu so they were more sheltered as the wind was blowing the snow into their run despite it being covered with polytunnel polythene on the top and a wind break around the feeding are. 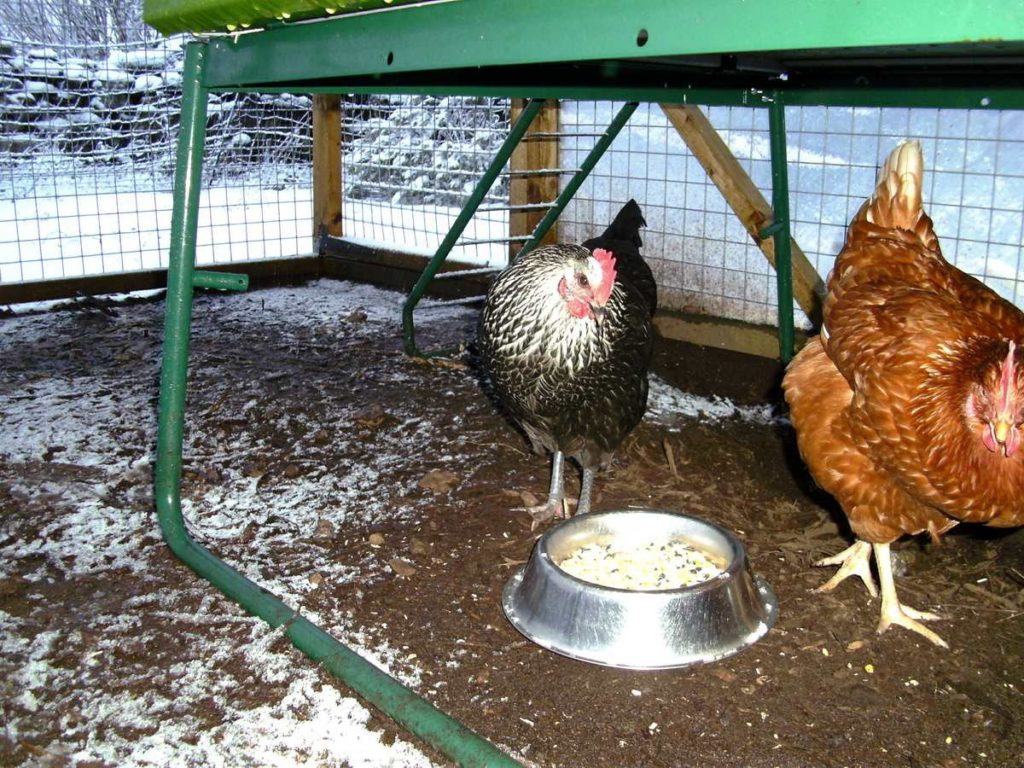 Chocky Enjoying a Corn Treat Breakfast under the coop

The greenhouse which I’ve now got ready for action was trying to become an igloo. Not just snow on the top but building up the sides as the wind blew it on there. 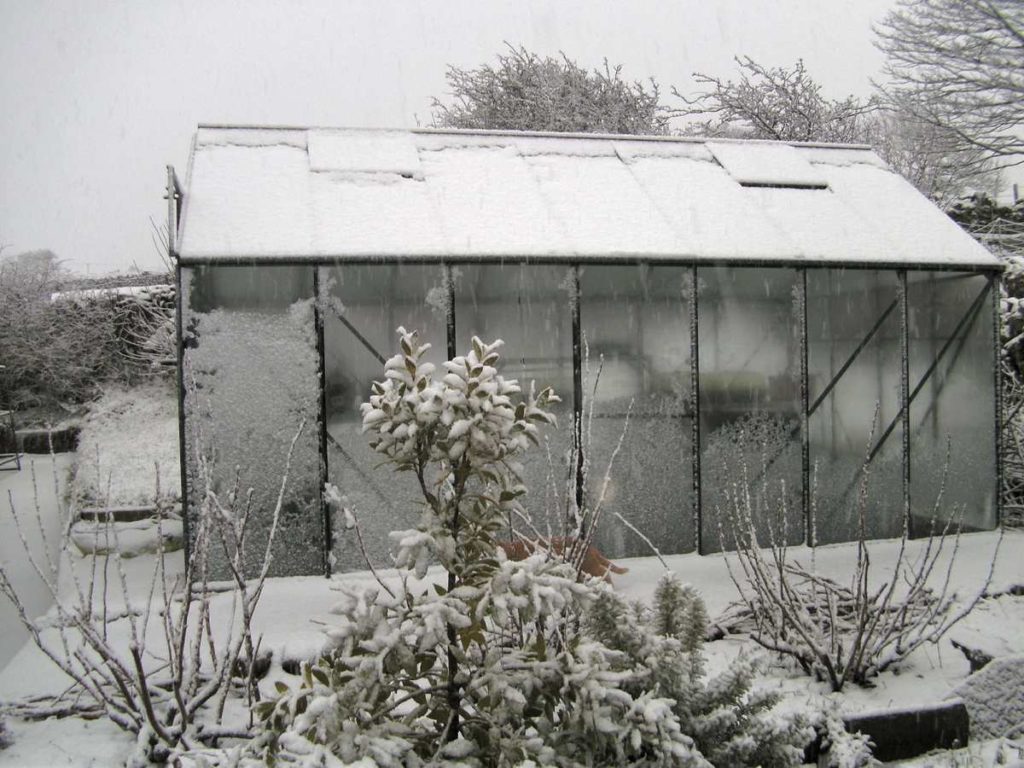 Greenhouse in the Snow

As I walked back to the house I was joined by Amber, our blind cat. She may be blind but that doesn’t stop her getting out and about. She even catches the odd mouse! She wasn’t happy about the snow though, actually grumbling and growling when flakes landed on her. 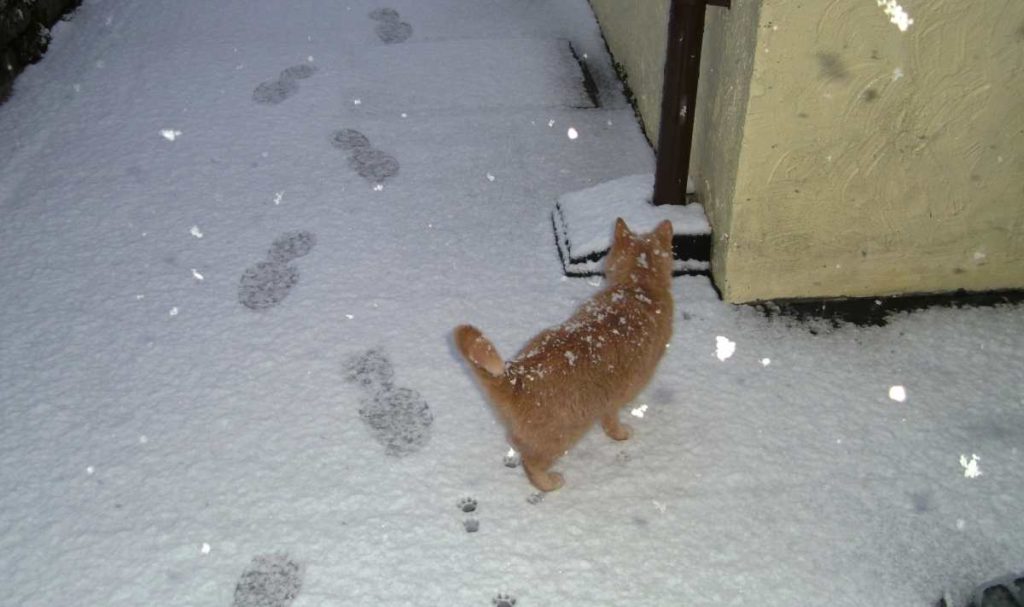 Amber Heading Back in the Snow

The amazing thing is the snow stopped and just a few hours later it rained and by mid-afternoon there wasn’t a sign of it! It went even faster than it came.

Because we’d had some problems with the car, I volunteered to take Val shopping. That’s volunteered as in ‘volunteer or die’ She was a little concerned in case it played up again but the new battery has done the trick and it’s running sweetly.

Anyway we went into Wilko where they’d got some sets of a spray and hose connectors for just £1.00. Couldn’t resist. They hadn’t got the pressure sprayers in that I wanted though. Mine exploded when I pumped it up. 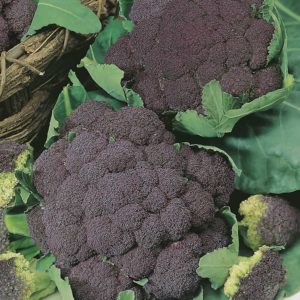 On the way past I noticed they’d got some purple cauliflowers, Di Sicilia Violetto, not one I’d heard of but for 75p I thought it worth a go. They say “cauliflower Di Sicilia Violetto Seeds produce a regional favourite that’s loved by many generations for its superior flavour, tender texture and rich appealing colour. Once the main head is cut, further side shoots will develop to extend the harvest period.”

We’ll see how it does in wet Wales where the climate is a bit different to Sicily and what the grandson makes of purple cauliflowers next October, all being well.