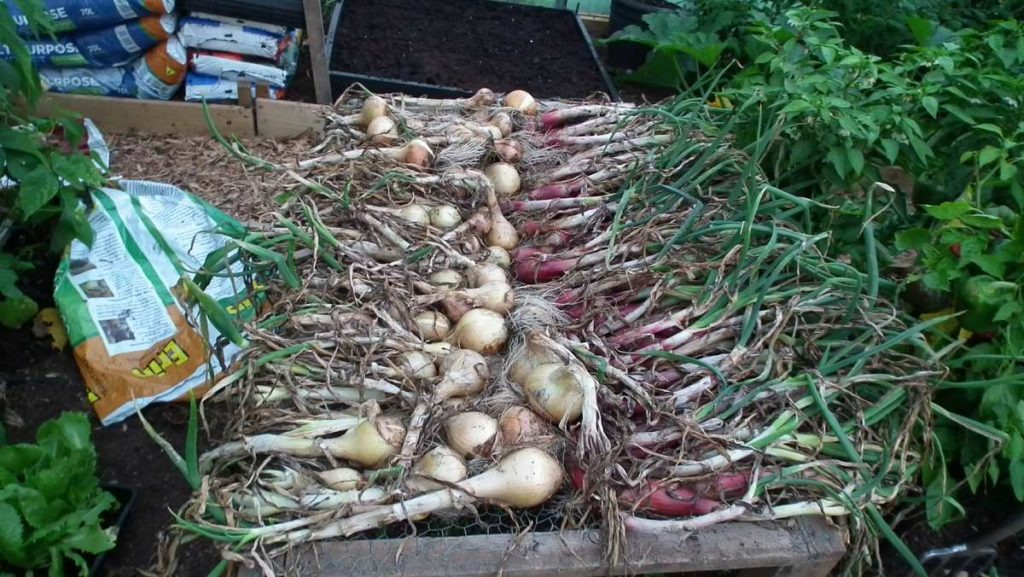 Onions Drying in the Polytunnle

Well my hopes for an Indian summer don’t look as if they’ll be fulfilled. Heavy grey skies or raining seems to be the rule. Still it makes the odd glimpse of blue sky and sunshine even more glorious.

The greenhouse is suffering a little, the high humidity encourages moulds and botrytis. It’s tricky balancing the greenhouse ventilation to try to combat moulds yet keep it warm. A couple of the tomato plants are affected and they’re all looking a little tired now. Sometimes I’ve kept the plants going right through to November but I don’t think they’ll go much beyond the end of this month this year.

The peppers are doing OK in the greenhouse but in the solar potting shed they’re suffering from a sudden explosion of whitefly. I’ve sprayed with SB Invigorator which is organic and safe with no restrictions like a withdrawal period. My grandson loves sweet peppers and whilst I’d take a risk with a spray for me but not for him.

With both the greenhouse and solar shed, I’ll be using a smoke fumigator to wipe out any whitefly etc. hiding away in the cracks and crevices when the crops are finished.

Up in the tunnel I’m organising for the winter now. It’s quite warm even when it’s raining so a nice place to play work hard.

Three Surprises in the Tunnel

On Friday I was working in the polytunnel when my big black cat, Dexter, shows up. Now he’s a lovely cat but he wasn’t at the head of the queue when the brains were handed out. Well it starts to rain which makes quite a noise as it hits the skin of the tunnel and Dexter is looking a bit uneasy… then there’s a cloudburst and it’s like a power shower in the sky!

The drumming noise was unbelievable in there. Dexter takes fright and runs to the door but it’s really pouring down out there.. Oh what to do? Then he sees the drying rack with the onions on and decides that looks the ideal place to hide.

I wish I’d had a camera with me. The front half is hiding under the onions but his backside is sticking out! Like I said, not at the head of the brains queue. 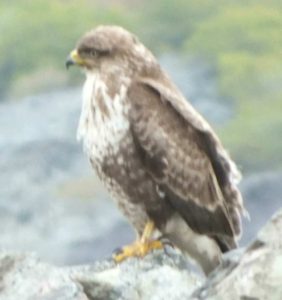 Saturday I was back up in there for a couple of hours. I was kneeling to cut a few courgettes when I heard a loud fluttering up above. I look up to see a bird is flying around, bumping into the roof and looking to be in a panic.

My first thought was a pigeon as it was big but then I realised it was a buzzard!

The only thing I could think to do was to open the second door but she must have seen me move and then spotted the exit.

Once outside she gracefully flapped her wings a few times and soared into the sky.

They say it comes in threes and they may have a point. As strong winds were due in on Sunday my son-in-law kindly offered to close up the tunnel for me. So Monday when I opened it up out came two cats looking very sorry for themselves.

The bottom of the door now has little cat-claw sized holes in it. At least there are no mice in the tunnel.

Winter crops in the polytunnel

Anyway, apart from the dramas, here’s what I’ve been up to.

Drying the onions on the rack in there – they wouldn’t have a hope outside with the rain. Later I’ll be moving my sweet chestnuts (in large pots) into the tunnel or maybe the greenhouse to give them some shelter over winter. They’ll get planted out next spring.

I forked the patch where the broad beans grew earlier this year which had had the peppers in pots on. I didn’t turn it over, just pushed the fork in and wiggled it about, a little like spiking a lawn.

The idea is to open things up and allow the compost on the surface to penetrate down without breaking up the soil structure. Then I heavily limed and added a 5cm layer of the compost from the carrot’s deep bed. The lime is because I’m planting some brassicas in there. Started with a dozen Hispi small cabbages at a 30cm, 12″ spacing. 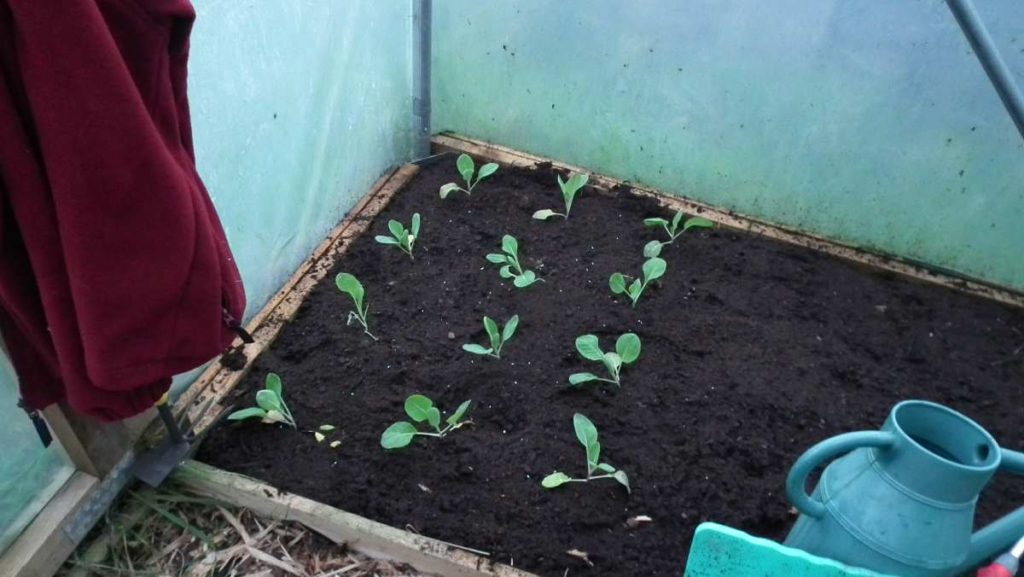 A sowing of Amsterdam Forcing carrots into one of the deep beds vacated by the potatoes. Being pelleted they’re really easy to sow accurately so I’m aiming for 7.5cm spacing. That’s 3” in real money. It’s a fine compost with some added potato fertiliser and insect frass.

Insect frass is basically dried insect dung and some growers swear it’s miraculous stuff. I’m not so sure it’s a miracle worker but I’ve got some and it’s got to be worth a try.

The Christmas potatoes went in, the Duke of York into the bed that had carrots and the Charlotte into the other bed that did have potatoes but the top 20cm of compost has been moved onto the veg plot outdoors.

Some lettuces, radish, spring onions (White Lisbon, Winter Hardy) and turnips going into the side bed.