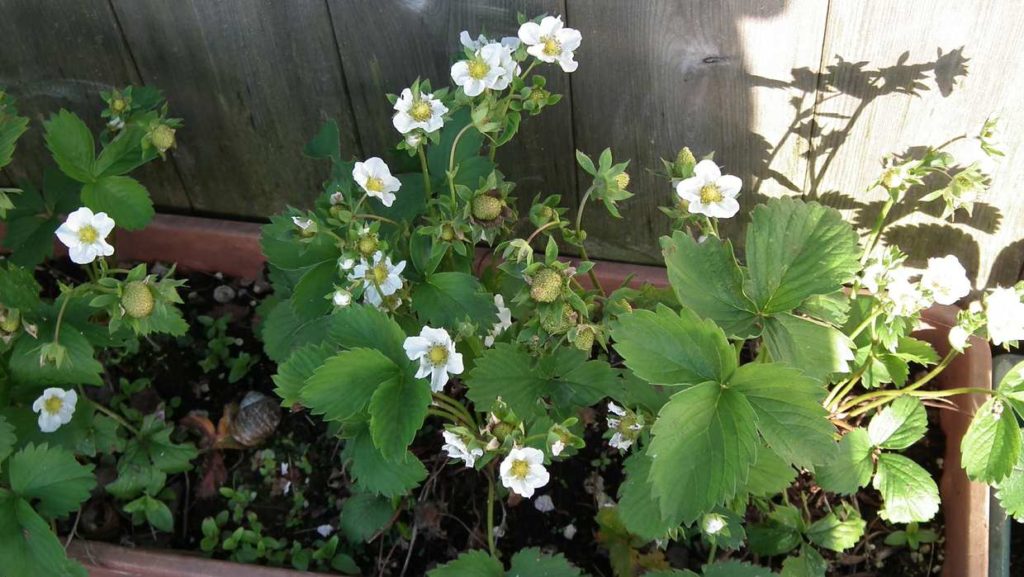 Strawberries Developing – Assuming Sidney Snail and his 1,000 mates don’t get them first!

I noticed the strawberries aren’t far off now. I think they’re my favourite fruit although I prefer blackcurrants when it comes to jam. As the fruits are swelling and ripening now, a dose of tomato fertiliser is in order to help them on.

I’m not so sure about using comfrey tea though, the smell of the tea would hardly enhance the flavour of strawberries!

The plan is to grow strawberries in growbags in the polytunnel later on a hanging shelf. I’ve got all the materials to construct them but I’ve been concentrating on the outdoors whilst the weather has been decent. 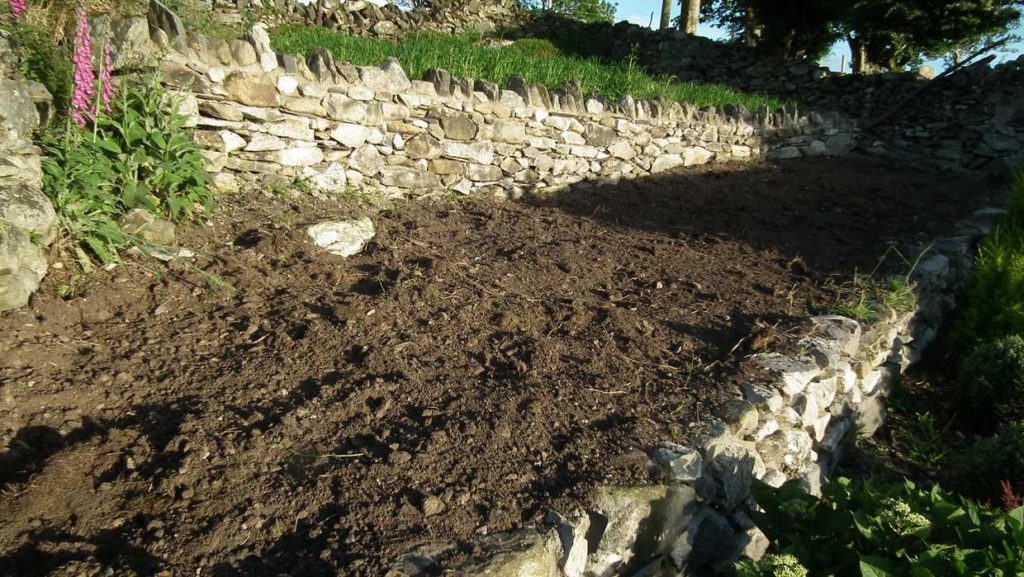 When I had the retaining walls built and terraced the slope that came down towards the old pig-sty, I knew I was going to use the top terrace for poultry and the ground level path border for decorative plants but I wasn’t clear about the middle terrace.

It had a thick mulch with grass clippings which was renewed a couple of times and the soil has started to improve. I think next year I’ll bring it into production as part of the vegetable garden.

Although it’s not in full sun, which would be best, it is very sheltered from the wind which is probably more important here. Only real problem is going to be avoiding falling off the edge!

Despite the mulch, grasses and weeds had managed to get a hold so it’s been stripped off, rotavated and re-levelled before sowing thickly with mustard as a green manure. To boost the process, I also gave it a fair amount of pelleted chicken manure.

The first crop of mustard will most likely be cut and composted with time for a second crop that the winter will kill off. I’ll leave that second crop to go down onto the surface and remain as a winter mulch.

The potatoes under a straw and grass mulch, which is now all over, are showing through well now. They were slow to get going – and planted late – but I’ve high hopes. We’ve a long growing season here and it’s usually mild until November. Often September is our best ‘summer’ month.

Biggest fear is blight, of course. Since the bulk of the varieties are blight-resistant Sarpo variants, I’ve a good chance of getting a decent crop.

We’ve been enjoying the first earlies from the polytunnel but it’s time to clear those raised beds. Next year I’ll have them in much earlier. In fact, I may well try a second crop for Christmas in there.

The polytunnel is doing really well. The broad beans are twice as tall as their compatriots outside and covered with flowers. The sweetcorn is shooting up and the climbing beans racing up their strings towards the crop bars. The plum Roma tomato plants are looking good as are the aubergines and peppers in pots.

The recent overly hot weather and me still learning how much ventilation the tunnel needs resulting in a few temperature spikes has not been good for the lettuces causing some bolting.

Particularly pleased with my chard as well. I made a Greek style cheese and spinach pie using chard instead of spinach. Very good, if I say so myself.

The greenhouse is also performing well. I’ve never had tomatoes grow so well as they are in the quadgrow planters.

Only real disappointments are the carrots, due to the seed being past it and a pack of dwarf French beans that completely failed to germinate. I bought a couple of cucumber plants of a new variety to me Hana, which I won’t grow again. They’re a mini variety, which is fine, but nothing special in flavour and they’ve developed powdery mildew despite it not being too humid. I’ll try a dilute milk spray to arrest it.

I’ve got a couple of Burpless Tasty Green plants coming on – they’re my favourite cucumber anyway.