Chill Out in the Heatwave 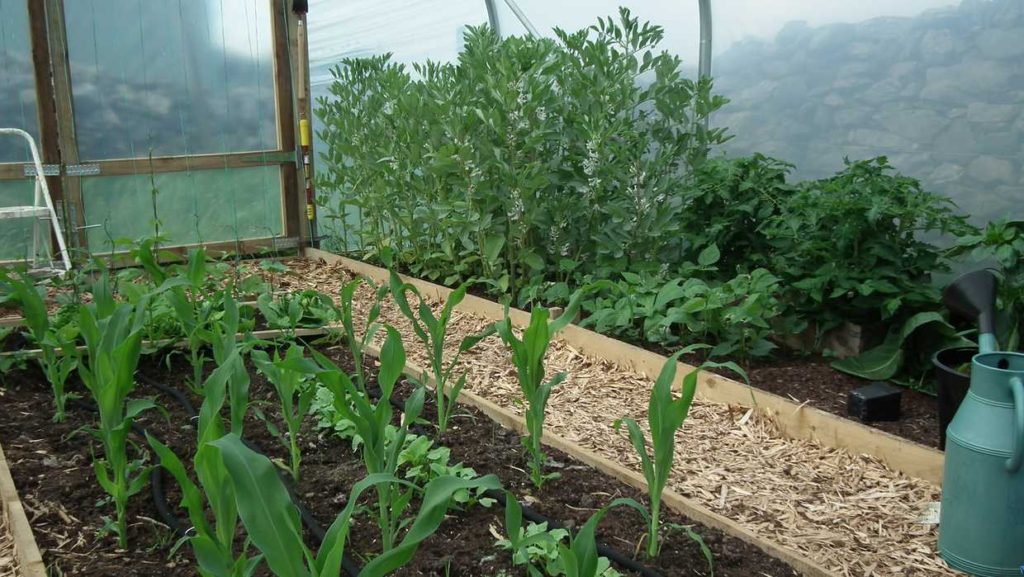 Since the weather forecast was for hot and sunny with the night temperature only falling to about 14, I decided to leave a door open on the polytunnel overnight. That way, if I didn’t get up to it early on the temperature inside would still be tolerable.

Now, as it happens, I had another sleepless night, only getting to bed after watching a glorious dawn so it was about midday before I got up there. It was 44 degrees! The plants were looking a little stressed and I think they’d have melted if they hadn’t been previously sprayed and watered with Envii Chill Out which protects the plants against heat stress.

Chill Out is a feed supplementing bio-stimulant that can be used as a foliar feed or to the soil. It’s used in glass houses in the Middle East, where it can get nearly as hot as Wales! Not only does it help the plants survive when the temperature is above 30 degrees but they actually thrive and grow in those high temperatures that would normally, at least, check growth.

It’s made up of plant extracts that work together to manage a plant’s reaction to heat stress. The plant’s natural reaction of aborting buds, flowers and shoots is changed to direct the plant into growing larger roots and focus on getting more nutrients and water from the soil.

I find the Envii products generally very effective and I’ve had good results with their liquid seaweed fertiliser this year.  I sprayed the chitting tubers a couple of times and the potatoes in the polytunnel had a couple of feeds with it as well. I’ve also used it as an additional supplement for some cabbages which are doing very nicely, thank you. Of course, it’s not a proper scientific trial with controls and so forth but as a chap on our forums likes to say “works for me!”

Envii say about their Seaweed Fertiliser:

Seaweed fertilisers are an excellent alternative to synthetic fertilisers as they naturally contain many trace elements, growth hormones and nutrients such as nitrogen, potassium, phosphate and magnesium. The addition of seaweed to any imbalanced soil and will automatically balance the soil levels and provide fungal and disease preventatives.

SeaFeed Xtra is a unique fertiliser that has all the benefits of a normal seaweed fertiliser with an added formulation to improve the mobility of nutrients within the plant. This formulation helps deliver the vital nutrients into the main artery of the plant without the plant having to expend unnecessary energy trying to break them down.

Cooling Down the Polytunnel

Anyway, back to the polytunnel. The first thing was to open all the doors to get an airflow through and then to water. Rather than just flood the soil, initially I used a fine spray over the plants which cooled things down effectively in the tunnel. Once it was down below 30, watered the soil in the side borders properly and then connected up the soaker hose in the centre bed. I left that happily dripping away for 3 hours, whilst I got on with other things.

The rear doors have their ‘latches’ on the inside but the floor spikes were on the outside so to open the doors I had to walk around the outside to the back. That offended my sense of efficiency so I swapped them to inside the doors. That took a little over an hour – 20 minutes for the job and the rest finding various drill bits and other tools from the big shed. 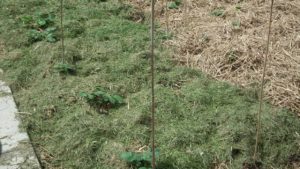 The potato beds outside under straw got treated to a good watering, the haulm is just starting to pop through but the soil is very dry. You can really see the effect of this dry weather on the grass and the difference a good level of organic matter in the soil makes.

The impoverished fields with thin topsoil and little organic matter are very sensitive to dry weather and the grass basically stops growing. When it rains heavily, the water runs off easily as there is no organic matter to act as a sponge.

Friday was blistering hot, at least by our standards here – 28 degrees. I’d planned to take full advantage of the day by mowing the grass and using the clippings to add to the straw mulch on the potatoes plus some desperately needed weeding.

Well I managed about an hour with the mower before I gave up and retreated to a parasol, feeling like a wet dishrag. My grandson came over in the afternoon to play in his paddling pool. It was exhausting enough just watching him racing around, splashing water and drowning various bugs he spotted. At least I got a bit done.