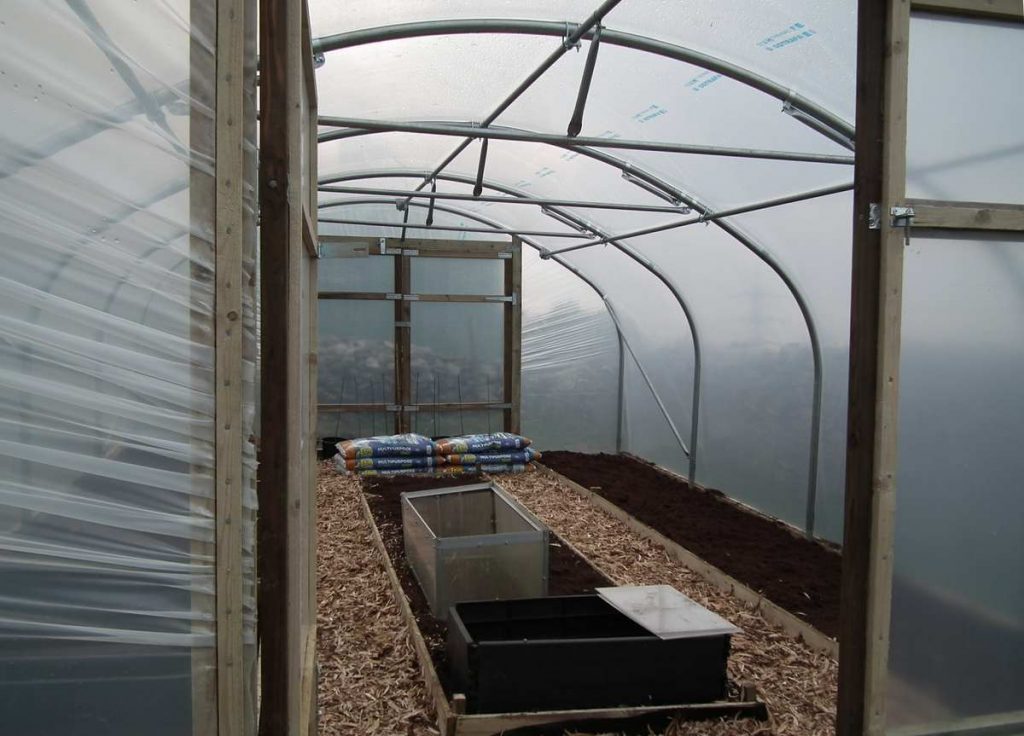 Some more fine, if cold, weather so things have been moving ahead at a fast pace.

The centre bed has been dug over, removing a load of stones in the process and I’ve added a load of compost to improve the soil to the beds. Have to maximise production in the tunnel, which means good soil.

I’ve used up all my own compost and it wasn’t enough so I topped that up with some bags of Erin multi-purpose. Our wonderful Stermat has them at 3 70L bags for £10 so it doesn’t break the bank.

I got a load of bark peelings for the paths. I’m using bark peelings because they’re not permanent and if I should change my mind on the layout in the future, it will be easy to rake up and compost or re-use.

My neighbour took me down to Glasfryn, the fencing place, with his huge hydraulic-lift trailer to pick up the peelings. They loaded us up with the tractor and, £14 lighter, we headed back.

Not like the good old days on Wistaston allotments where the council guys dropped lorry loads of chippings for free. So far I’ve had 3 tree surgeons promise to dump their chippings for me but none have actually come back.

The only concern I’ve got with using bark peelings is if red ants set up home. I’ve not seen any around here but I had it happen when we were in Crewe. Kneeling in a nest of red ants whilst wearing shorts is not an experience I’d recommend!

I’m actually ready to start using the tunnel properly now. There are still some things I want to do in there like a suspended shelf to grow strawberries on but they’ll wait for now.

I’ve a couple of Linkabord raised beds which are roughly a metre square. I’m going to plant these up in the main border with some first early potatoes. Hopefully we’ll be starting on those by the end of April.

In the centre bed I’ll set up the raised bed with a coldframe and get some really early carrots going. I think they’ll be glad of the extra warm the coldframe will provide.

The area where the poultry will be safe and sound got rotavated. The Merry Tiller was a bit unsure about starting after sitting for a couple of months and it being just a couple of degrees above freezing. Nothing a spray of Easy Start couldn’t fix. A few coughs and splutters then she settled down to work.

Still needs a little levelling and as soon as things warm up a bit I’ll sow it with a poultry seed pasture mix. Lucky chooks!

Because of the fox problem, I want to roof over as well as build walls. Even 2 metre fences don’t always stop a hungry vixen with cubs to feed. Plus hungry seagulls and rooks can be a problem raiding the run for feed. I don’t trust the buzzards, either. Beautiful birds and lovely to watch floating lazily in circles until they plummet like a missile down onto some unwary mouse or young rabbit. 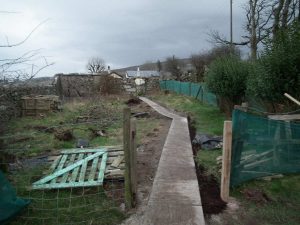 The Path is Finished

The new path through what is becoming the veg plot is finished. It makes a huge difference, especially when it’s raining – which it does occasionally in Wales. I can take a wheelbarrow right the way from the shed to the tunnel on a hard path.