Fantastic Weather for Lots of Jobs 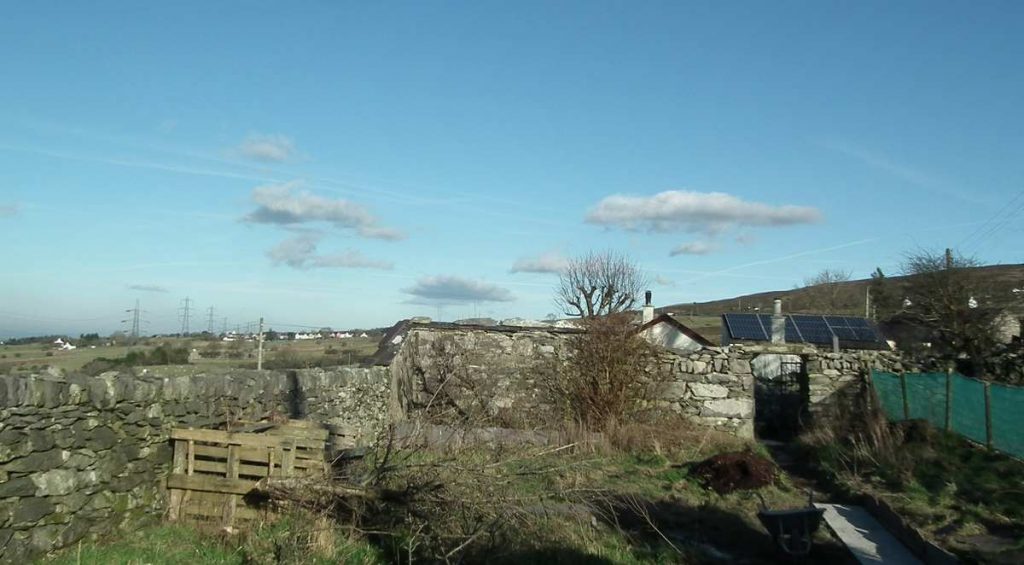 Cold but Beautiful – Although a few clouds floated by

The last couple of days have been fantastic. Blue skies and the sun shining in the day with dark black night skies on which the stars sparkle brightly. If it wasn’t so cold it could be summer, and cold it is. Double thermals weather!

We’ve a lot going on apart from tree planting. The blackcurrants finally got pruned, a bit late but they’re still pretty dormant. This winter seems to be mild and quite warm one day and freezing the next. This is pretty confusing for the plants, is it spring or not?

Hopefully it’s catching a lot of slugs and snails unaware as well. A really mild and warm winter means the following season is plagued by the beasties. 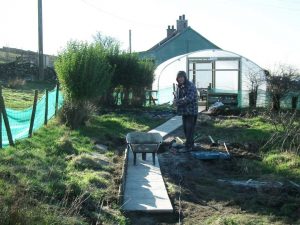 Bryan laying the new path up to the polytunnel

My pal Bryan the Builder (Gwynedd Building Restoration) has returned to carry on laying the new path. He’s such a perfectionist. I keep saying it’s just a path but if he does something poor he feels it reflects on him. Well, we’re over half way with the job now.

The new fruit trees are surrounded with weed matting that’s mulched over with wood chip so they won’t have competition from the grass. I’ve ordered another couple of damsons as well, a Merryweather and a Farleigh. They’re both old heritage varieties but still popular.

Merryweather produces large fruits and is noted as a very hardy, heavy cropper. Farleigh (aka Farleigh Prolific) goes back to 1820, I think. Noted for good strong flavour. It’s often incorporated into hedges, which suggests good strength. Although a Kent native, it does well in ‘northerly wet regions’ – which sums us up!

Both are on St Julien A rootstocks which are quite vigorous. The thing is with poor conditions to use a stronger rootstock than you might in a sheltered spot in Kent.

My Jostaberry has turned out to be more of a thug than my blackcurrants. I’d cleverly planted the Jostaberry and surrounded it with 3 redcurrants but the Jostaberry was swamping them.

On another bed I’d got 3 gooseberries that have done very badly. I’m not sure why, but they’ve not responded to anything I’ve tried to perk them up. So, out with the gooseberries and in with redcurrants. Hopefully all will be more productive – except the gooseberries who’ve gone to the plot in the sky.

At the polytunnel end of the vegetable plot the gate fell apart some time back and a pallet has been filling in. The end posts have become loose as well so widened the holes and fixed them in with postcrete. Amazing stuff, it sets so quickly. I’ve a month or so yet to build the gate before sheep start going past. Or to be more accurate, running into the veg plot to eat anything that grows if I haven’t got the gate made and fitted. 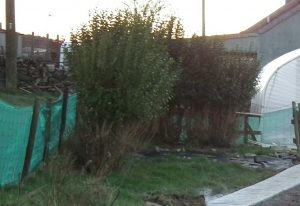 There are two runs of hedging by the veg plot. The hawthorn has had its annual haircut and, being quite slow growing, should be fine for the coming year.

The privet is overdue though. I’ve got my daughter’s old hedge cutter so I’ll run the extension cable up next dry day and whiz over it.

I’ve finished the edging for the centre bed now which is ready to be dug over. One of the front doors has a large gap under where the ground slopes down. I’ve put a board under which will close the gap and enable some levelling inside. 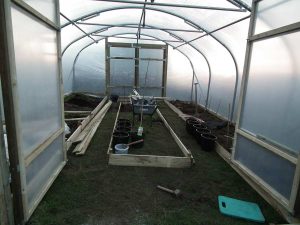 Centre bed finished in the Polytunnel. The crab apples in pots and the cherry in there.

The next job will be to break up the border soil, I can use the Mantis if I have the doors open at both ends so the fumes don’t kill me.

Then add a load of compost to improve the soil. I have to maximise production in the tunnel, which means good soil.

I also need to get a load of wood chippings for the paths. I’m using wood chippings because they’re not permanent and if I change my mind on the layout in the future, it will be easy to rake up and compost or re-use.