It’s not been the best of weeks again. We drove over to Newcastle-under-Lyme on Thursday for the funeral of my father-in-law, Ronald Shenton. He’ll be sorely missed. He was a good practical gardener and I recall being so proud when he told me he thought my first book, Vegetable Growing Month by Month, was very good.

In latter years his abilities waned, as will happen to us all if we live long enough but even towards the end when he was in the residential home he was able to teach me a few more things about growing as we chatted on our visits.

One the positive side, I’m finally pain free following my last visit to the dentist on Tuesday for part one of the root canal. Part two is at the end of the month. I can go out into the cold and breathe without my tooth screaming at me. Even had ice cream the other night.

Saturday was supposed to be light cloud with sunny spells according to the BBC so my son-in-law Gary came over as we had planned a good day out on the plots. Of course it didn’t work out to plan. It was freezing cold and windy, which can be coped with, but it drizzled as well.

Up here it was about 4ºC but with the wind it felt like there was a minus in front of that. Because we’re near the coast we won’t see a frost though. I must say I’m hoping for a cold winter with at least a week below zero to kill off a load of the slugs and bugs – fingers crossed.

Gary tackled the blackberry thicket and revenge for them getting my leg was had. I’m still suffering with that infection. It may not be painful like the tooth, but it is concerning me. I reckon my warranty has expired. 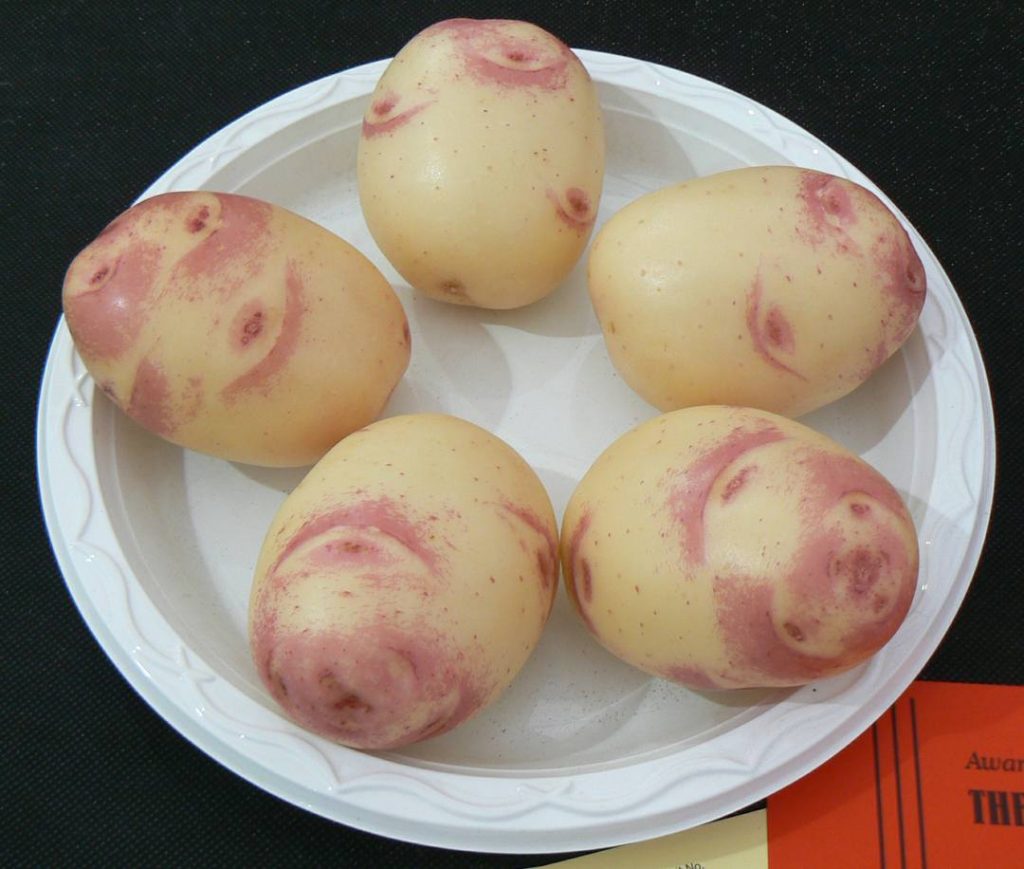 Potatoes grown for show – dish of five. Harder work than you might expect to get them

Well the results are in from my growing potatoes in bags as favoured by the show growers. See Growing Potatoes for Show It’s not something I’ll repeat. The benefits are you can get a decent crop and the potatoes are very clean. Few if any blemishes and little to no slug damage although a few snails had got in the bags.

The drawback is the amount of effort it takes to get the crop. Not only do you have to set up the bags and fill them with compost and fertiliser, which isn’t too hard. The real work is in watering.

Even when it pours with rain, because they’re in bags they can dry out so there’s a lot of watering to be done. I suppose if you do it every year you’d find it worthwhile constructing a drip irrigation system.

As someone who grows for table rather than the quest for a red winner’s card at the show, I’ll stick to growing in the normal way. One exception, some really early potatoes in bags started in the greenhouse.