Easter is the traditional time for planting potatoes but Easter is pretty early this year. Mind you, I thought that being in the wet west and having more in common with Ireland than England for weather, St Patrick’s day would be better. It’s the traditional Irish planting time.

Well what I think doesn’t matter – the weather has not been conducive. Just as I thought things were changing for the better, along comes yet another storm. Still, most of Good Friday was pleasant here.

Warm and sunny gradually gave way to windy, cold and more cloud although the full force of the wind and rain held off until night time. Storm Katie is about to strike, but for once the south of the UK will get the brunt and we’ll have a fairly decent day on Monday!

What I did get around to was planting some shallots and onions sets. I’d added compost to the raised beds earlier so I ran the Mantis over the beds to mix everything up. It literally only takes 5 minutes to do a bed with it.

Next I added three good handfuls of calcified seaweed per bed (they’re 10’x4′ beds) to encourage microbial action and raise the pH a little. Next a couple of ounces of Growmore general fertiliser per square yard to provide a good nutrient base along with a goodly amount of wood ashes to add additional potash.

You can get specific fertilisers for onions, these are usually high in potash which the onion craves. Hence the wood ashes.

Finally I added 2oz of salt per square yard – just cheap road salt I’ve got for dealing with ice on the track. I’d read about this in an old gardening book but it was only the other year I actually tried it. I really didn’t think it would do any good and adding salt to soil is not something generally encouraged in modern gardening texts.

The results were amazing, despite being late planting I ended up with a fabulous crop, much better than I expected.

It was by no means a scientific comparison test and it could have been the weather or any other factor that made the difference. However, I thought the results encouraging enough to try again. 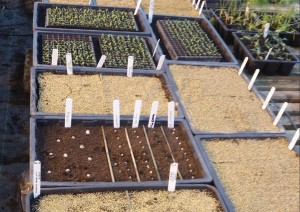 So long as I’m on a decent rotation of 3 or 4 years, the amount of salt will not harm the soil for growing other crops. Perhaps next year I’ll do a proper comparison test. One bed with, one without otherwise identical and growing the same variety.

I planted up two beds, which are covered in netting suspended on a framework. This will stop bird damage but the main problem is cats using the soft soil to toilet. The netting keeps them out.

Another two beds to go as soon as the weather allows.

Visit to Medwyn’s of Anglesey 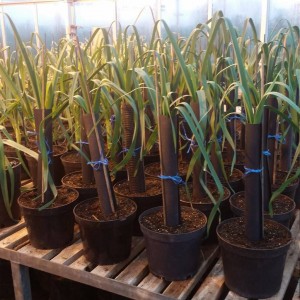 Earlier in the week I popped over to Medwyn’s and picked up the potato sacks and fertiliser. His place is quite easy to miss if you don’t know the road, but eventually I spotted the glow of the sodium growing lights in his greenhouse.
It’s a hive of activity in there with seeds being sown and seedlings transplanted under the yellow light. Large areas of the benching covered in seed trays, brown with vermiculite covering.

His leeks are already over a foot tall, growing away in pots, wrapped in black to increase the blanch. Mine aren’t even seedlings yet! You should see his stock leeks, kept to produce seed, enormous. Just one would do us for 3 meals.

Over in another part of the greenhouse he’s growing some large onions. By large, he’s talking about 10lb beasts. Normally Medwyn aims as much at quality as quantity but I think he’s decided to take the giant veg growers on now. If I was them I’d get used to second prize!

He asked me if I’d like some onion sets and kindly gave me a bag of heat-treated Sturon sets. Heat-treated means that the germ has been killed and the onion won’t bolt or run to seed.

Sturon are a good culinary onion. Medium sized, good flavour and they are noted for thin necks and storing well, often through to March.

300 gram pack Sturon Onion Sets in Medwyn’s shop. You need to move though, they’re not going to last long at that price. In any case, you want them planted out by mid-April if possible.