Tuesday was set to be sunny for most of the day so I determined to spend it wisely on the plot. Cleared some work on Monday night and went to bed late, which is not unusual for me. But I’d gone and forgotten to take my blood pressure pill so I couldn’t get off to sleep for ages, about 6am I finally went off and ended up sleeping through to midday. It’s an odd thing but I always feel full of energy if I don’t take the pill but I suppose I’d best do what the doctor says lest my head explodes or something. 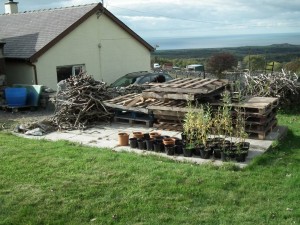 Comfrey cuttings in pots along with willow saplings to plant. Behind is wood to cut for the fire and pallets to strip down.

Finally got outside and was continuing with the grass mowing when our neighbours turned up so a break for a cuppa before finishing off that off. Then carried on weeding one of the raised beds that I’d allowed to get in a shameful state. It was the job I’d been putting off and you can tell how bad it was by the fact that there were a few traveller potatoes in it that had produced about 5 kilos!

The neighbours have had my old wheelbarrow, they may have a spare wheel they can fit to it. They’re doing some building work and it will be fine for moving concrete and so forth with a new wheel fitted.

Then a pal from the village popped over so it was back on with the kettle. Not a very productive afternoon but as the poet said;

“A poor life this if, full of care,
We have no time to stand and stare.”

Or drink a cuppa with a friend…

Wednesday started well, it was sunny and more or less stayed that way all day. I don’t know what’s going on with the weather, it’s just great for the time of year. No complaints!

Cara came over first thing along with grandson Gabriel who was in fine form. As any parent knows, when they go quiet it means they’re up to mischief. There he was in the shed happily rearranging everything and trying to start the Mantis. He’s worked out the pull cord is the key. He’s also figured out how the taps work on the water butts and that a big grin lets him get away with near enough anything.

Once they went it was back to work after I got my breath back. I’d sowed the remainder of my carrot seeds in one raised bed to try and catch a last quick crop but whilst we were on holiday the bed had been swamped with chickweed.

There couldn’t have been more if I’d deliberately sown the chickweed. I started clearing the bed carefully but it soon became apparent there were no carrots at all trying to come up, so just ripped up the rest of the chick weed. Disappointing but nothing ventured.. Once the bed was cleared I sprinkled a couple of handfuls of green manure mustard, raked it in and replaced the wind netting.

Covered another bed with weed matting to keep it clean until I plant it up and then moved onto the comfrey bed. When I first planted it I was keeping in mind that the soil quality is poor and so went for a fairly large spacing but the grass has managed to re-establish itself and is threatening to swamp the plants.

I’m not at all sure what to do but I think I’ll heavily mulch the comfrey bed in the winter when its died back in the hope of knocking back the grass and feeding the comfrey so it swamps the weeds. In the meantime I’ll just weed out the grass as best I can.

Thursday was yet another glorious day. Cold but a hard blue sky with white contrails from a couple of high-flying jets and sunshine casting hard shadows. By 11am I was sweating so the jumper came off. 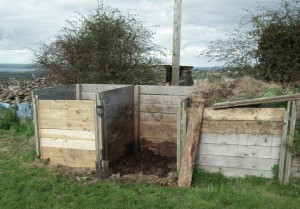 Compost bins, left near full; second empty ready for contents from the third.

The main job for the day was composting. The bin on the extreme left was empty and much of the next bin was forked into it. Contents from the edges into the centre and from the centre to the edges, breaking up any clumps.

As I moved down the bin I was emptying the contents were better and better rotted down and the last third, just over have a cubic metre, was ready and went directly to one of the raised beds. The empty bin will have the contents from the bin to its right moved into it. Assuming I’m alive and able to move. 10 years ago I’m sure I would have done it in half the time and ached less.

Saturday started with a clear blue sky but it quickly clouded over. Still we did get some sunny spells over the day and, for October, marvellous. First job was to run the Mantis over the new compost in the raised bed to break it up. The Mantis leaves the soil so fluffy that standing on it leaves an 8 inch depression! 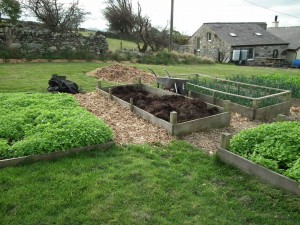 Compost piled into the raised bed, mustard in some beds and leeks below the compost filled bed.

Once the soil was levelled I put a thin layer of grass clippings on the top and then replaced the black weed matting over it. I’m hoping the worms will take the clippings in but if they don’t I’ll just mix them into the soil prior to planting. The matting stops weeds from growing and cats from using the bed as a toilet. We’d be swamped with mice but for the cats although you don’t get something for nothing and the cats bring a few problems of their own.

Having emptied the second bin I started filling it up from the third bin. The top of the bin has some dried out weeds and long grass along with some fairly fresh weeds like the chickweed from earlier in the week. As it went into the second bin I also added grass clippings.

Grass clippings are bee to compost. If you put a layer on, they compress to exclude air and basically just sit there. It can take two or three years for compressed layers like that to rot down. Mixing them with other weeds and long, dry grass keeps them from compressing and they will go down well whilst adding bulk. As I built the new heap, I layered as for the previous one with lime and nitrogen.

About a third of the way down I hit actual compost which can go onto the other two dormant raised beds. I’m now filling the bin with comfrey, long grass and grass cuttings. I won’t need any activator with the comfrey being in but I’ll lime every foot or so as I go to keep it sweet.

By around 5pm the temperature was dropping as the sun was sinking and I was feeling as if I’d had about enough. It’s a good idea to start packing away before you’re absolutely cream-crackered. That way tools get cleaned and put away properly rather than just bunged in the shed or forgotten outside. It’s a tip I picked up from builders. A good builder allows time at the end of the day to clean up and put things away so the next day they can get cracking.