Compost, Comfrey and Catching Up

Sunday arrived with mainly grey skies and a damp chill in the air. Not that tempting to get outside but at least it isn’t raining. According to the weatherman we’ve got until Wednesday before things are back to normal for Wales with rain.

I’m very aware that winter is coming along and they’re reckoning on it being a cold one. I’ve little wood in the store and lots to cut up so that’s another job moving up the list to urgent. My neighbours kindly dropped a load of pallets off when we were on holiday. Some have salvageable wood and the rest will make good kindling. 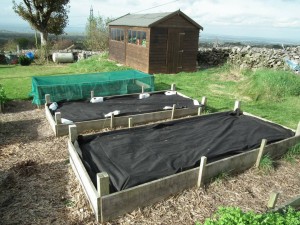 Topped up with prime compost and covered. Note the milk bottles filled with sand to hold down the matting.

We’ve gas fired central heating but it’s LPG delivered by truck to a tank and costs a small fortune to run. Our first winter here was a nightmare, minus 15 at times and next to no insulation in the loft. Not only did we have the heating on 24 hours which was burning money at a ridiculous rate but also the worry of whether the gas truck would get to us through the snow.

Our multi-fuel stove was the saviour. We had to burn coal at points which is not exactly environmentally friendly but it was (and is) mainly wood that kept us warm. Not just a renewable energy source but the waste product, the ashes, are a valuable potash rich fertiliser. Anyway, it’s on the list – chop wood.

Val’s sorted the shallots and garlic for store along with potatoes. The garlic is just trimmed and tied into bunches and the shallots go into net bags. After sorting, the potatoes go into hessian sacks which keep out the light but let them breathe except for the ones with some damage that go into the ‘use first’ box.

I continued moving finished compost to the raised beds but took a different approach with the next two raised beds. Instead of adding the compost and putting a thin layer of grass clippings on top, I put a thin layer of clippings on before the compost. A little experiment to see what works best. Once filled, covered the beds with weed matting to keep the weeds from growing and, truth be known, to stop the cats confusing them with litter trays.

I hit a snag with emptying the compost though, yet another layer of compressed grass clippings. Some went onto the first compost heap which is the one partially rotted but then I had a brainwave and used the Mantis to break it up and mix it with the mature compost. The result isn’t too bad, a bit like a bulb compost, and hopefully the clippings will now rot away over the winter.

The comfrey got a rather severe haircut. Since the grass is swamping it I decided the easiest route was to run the mower over and then use the Mantis to break up the surface between the plants. It will be getting a heavy mulch later on which won’t bother the comfrey next spring when it bursts into life but should hold the grass back.

The cut comfrey, long grass and some clippings went into the compost bin. Comfrey rots down very quickly and acts as an activator in a compost heap. Mixing the clippings with the long grass and the bulky comfrey should stop them compressing. 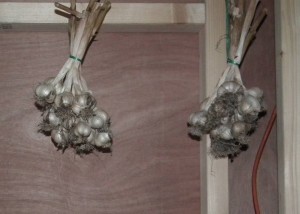 The garlic is trimmed, bunched and in the store.

Sadly the rain is on the way tonight (Tuesday) so this afternoon I moved to the greenhouse side of the house. Mowed the lawn above the greenhouse, weeded the bed behind the greenhouse and then watered everything. Meanwhile Val harvested 8 ½ pounds of tomatoes, a cucumber along with a few peppers from the greenhouse before making a start on sorting her decorative annuals in pots on the patio that have reached the end.

I finished the watering nearly in the dark, another 5 minutes and I’d have needed to put the lights on. I’m a bit disappointed that I’ve not got as much as I wanted done in this unusual spell of fine weather. I’ve still got some mulching to do along with 17 willows to plant for the windbreak and that’s just on the field side. I really must use the next fine day for wood chopping or we’ll be having a cold winter.

There are times when I wonder if I’ll ever get on top of the jobs, especially when I compare what’s been done with what I intended to do. Then again, a lot of the jobs I’m doing are one offs. You only plant windbreak trees once or clear new land. And if I’m honest, I’m not exactly getting younger although I might be getting fitter.

Leave a Comment Here on Compost, Comfrey and Catching Up Cancel reply