Well the weather certainly is unusual, it’s not raining and there’s no rain in the forecast. Yes it’s cold and cloudy but no rain! OK, a few spots yesterday but no downpours. This isn’t the wet Wales I know and love.

It was goodbye to my old wheelbarrow. I’ve had it for about 12 years and it’s not done bad service but it suffered greatly when a certain builder borrowed it and didn’t bother washing it after using it to move concrete. The last straw was that the valve went on the tyre inner tube.

After spending an hour trying to fix it I realised that the base was starting to go and maybe it was time to call it a day. We’re lucky around here to have a sort of DIY / Hardware chain called Stermat. They stock most everything and at keen prices so I ended up with a cheap but perfectly serviceable barrow for £28.

The greenhouse continues to produce but watering has slowed down now. The temperatures are lower and de-leafing means less water is required. We’ve blanched and frozen some peppers as there were just too many to eat fresh. Cucumber production is slowed to match the amount we can eat and we will have some aubergines but a they’re the disappointment of the greenhouse crop.

The leek beds were becoming swamped with weeds and grass so an hour’s weeding. They went in late and aren’t as far along as I’d like but we can always use two small instead of one large.

My neighbour came over and we had a go at fixing the Merry Tiller. It’s a bit of a mystery how we fixed it really. The favourite for the cause of the problem was that the woodruff key was broken but we couldn’t get the flywheel off to fix it. Obviously it wasn’t the woodruff key because somewhere along the line it started again.

The pull-cord was sticking on return so some grease was applied to the wheel it’s on which made it easier to pull but otherwise nothing appeared wrong. The plug was sparking well if a little dirty and after it was working I gave it a clean just to help in the future. Just one of life’s mysteries. 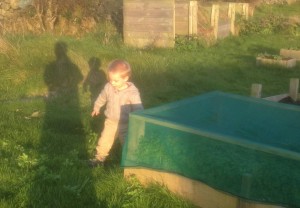 Weeding is great fun, ripping them from the soil and throwing them up to the sky

I came across a couple of comfrey plants that I’d started off in pots which had been blown into long grass a couple of years ago. One had lost its pot and the other had split the pot which was around it.

Since I want to further expand the comfrey patch next year I decided to split them and pot them up to plant on next spring. So down to the potting shed and out with my trusty big penknife. With pieces of root and offsets I’ve ended up with 17 plants. On past performance I’m pretty sure of 100% success.

Monday was a real disappointment. I’d planned on getting the day outside as there was no rain predicted. Well the met office had neglected to tell the clouds and they opened up in the morning. Not a lot but enough to put a bit of a damper on things.

Help from the Grandson 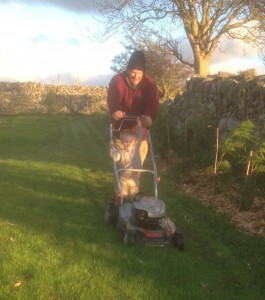 Lawn Mowing is Very Grown Up but you have to hold on or it stops!

It did brighten up later so I got the mower out and set about grass. I’d not got too far when my grandson arrived with his mum and dad. He was in fine form. First he helpfully watered the comfrey plant pots. They didn’t need it but it’s great fun pouring water out of a can.

Next he found some milk containers holding down some weed matting. Obviously milk belongs in the fridge so one by one he brought them to me. Getting the concept that they were doing another job over to a 2 year old was beyond me.

The late planted carrot bed needs weeding which he made a start on. Ripping the weeds and probably any seedling carrots carrots out and throwing them into the air with great glee. I think a few carrots a small price to pay for sound of a child’s laughter.

Of course the real fun for any red-blooded male is to be had with machinery (I know that was an awfully sexist thing to say) Over to the lawnmower where the throttle was wiggled and any potential buttons pushed (the petrol and oil caps). So I started her up and he pushed it around with a bit of help from me.

I would point out that I was holding the dead-man lever and if he moved towards the business end I let it go stopping the motor and blades immediately. The last thing I’d do is risk him.