Sunday on the Plot

I couldn’t believe it this morning, it was beautiful! Almost warm and lots of sun – even the cats just ate a bit of breakfast before running out to play. Anyway, before I could go play myself, I had a little work to do. I sent off the final corrections to another book – Low-Cost Living: Live better, spend less

– and that was it, done for the day. It’s a real milestone with a book when you send those corrections off, now it’s up to the publishers and you can relax. Well I could relax if we hadn’t agreed to write the recipe book!

Enough of this boring book stuff, off to the plot!

Unlike yesterday where it was just Larry and me on the plot and he had to go home early, today the site was positively crowded! It’s great to see it so busy with kids running around. As often happens when you get children playing when the parents are a bit occupied, they were getting a little wild. Not causing a nuisance but the state of them after they had a mud fight had to be seen to be believed! Well, they’re not mine so I can laugh. 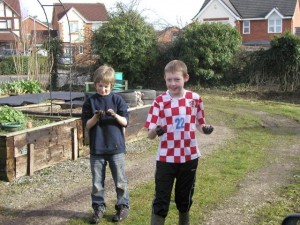 Having cleared a raised bed yesterday, I’d added a fair bit of blood fish and bone in preparation for today’s planting. Now this is embarrassing, today I finally got around to planting my garlic and shallots. I’d planned on getting the garlic planted in November and the shallots in February but here we go, mid March. Do what I say, not what I do!

There is a temptation to fib for me – pretend I do everything by the book, however hopefully it will help others who find themselves overtaken by events and well behind to see what can still be done. I’ve never claimed to be perfect. I think I should be OK with them but after last year’s wonderful garlic crop, some of which is still fine in store, I’ve a lot to live up to. I think Larry may beat me this year with his garlic but I could be lucky.

Last of the Leeks

I’d got a patch of very sorry looking leeks left, so up they came. Surprisingly about half of them are actually OK to eat so a carrier bag of partially dressed leeks went home. Val’s going to turn those into leek & potato pies, which will use up some sprouting potatoes as well. 1 for now, 1 for Dad and 2 for the freezer. The rest will make a leek and potato soup which can also be frozen if there’s too much.

I’d a few salsify left and they came up as well to make salsify roast chips for dinner. I like salsify but it’s not the easiest crop to grow. The biggest problem is that it forks very easily so you end up with a tangled mass of roots that’s well nigh impossible to prepare.

I love the flavour of salsify and of parsnips, that are easier to grow, but Val prefers parsnips so I think I’ll concentrate on parsnips this year and forget salsify.

I think it’s a bit early for potatoes but Andy and Clare were planting theirs. I’m not saying they’re wrong, last year I predicted doom for their really early planting and it did really well so this year I’ll keep my mouth shut. 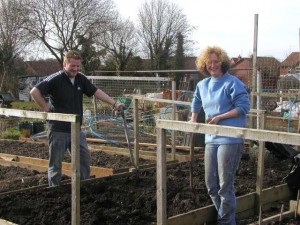 It’s funny, all the chat on the forums about chitting potatoes etc, whether to rub off additional sprits and so forth yet they had a bag of seed potatoes which they opened and dropped into a trench. What’s the betting they get a wonderful crop? I sometimes wonder if we go through a lot more pain than we need to in the garden.

She also picked up a 25Kg bag of Fish, Blood & Bone for me, which seems to have avoided a similar price increase. Now growing your own has become very popular and I have to wonder if this increase on compost comes down to exploiting the market or is it just reacting to demand? Not much difference either way, I suppose – still costs more.

I’ve finally got my photo system working so these shots and more are in Allotment Photos March and I’ve also put a few of the many, many shots taken by the Independent’s photographer, Colin McPherson up in Allotment Photos February.  I didn’t take any in January this year.

8 comments on “Sunday on the Plot”

Leave a Comment Here on Sunday on the Plot Cancel reply