We’ve had a few nice days but it’s hardly a blistering summer, still you play the cards you’re dealt and grab time in the garden when you can.

There’s a a patch up at the top of the track that was a bit of a dumping ground. Half bricks, broken pieces of slate, lumps of concrete and so forth. I wonder if it’s some sort of Welsh custom to add building rubble to stony ground, just in case there’s a shortage of rocks. 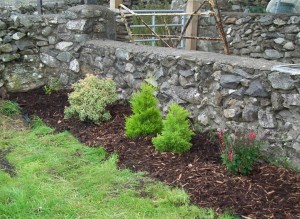 A good few hours were spent in picking them out and bagging them in old compost bags etc. for a journey to the tip. The trick is filling the bag just to the point where I can lift it. If I’d realised our local tip required lifting each bag over the side of a skip, I’d have put less in each bag. My back may recover..

We’ve a number of bushes and conifers in pots that can go into the ground. It’s always cheaper to buy plants small from the nursery, or start them from cuttings for free and bring them on as patio plants. So I decided to put a decorative border in where the rubble had come out.

Initially I thought about a golden conifer hedge but that felt a bit boring and slow growing so a mixed row of bushes went in, adding mycorrhizal fungi and slow-release fertiliser to get them started when I planted.

Being newly planted there’s a fair bit of space between the various bushes to allow for them growing and eventually filling the space. Left to itself, the grass would spread into the border and swamp the bushes, looking a bit of a mess unless I spend a lot of time hoeing so I ran weed suppressant matting along, cutting it around the plants.

This does the job but black weed-proof matting is pretty ugly so I covered that with bark chippings, which transforms the whole thing. I’d prefer to have laid the bark chippings directly onto the ground along with some nitrogen fertiliser to compensate for any nitrogen robbery by the chippings as they rot down and improve the soil.

The problem with that is that grass will push up through the chippings and so it still requires weeding. The matting stops that and can even just be laid over grass and weeds which it will kill off. A great time saver and fairly cheap to do.

With vegetables it’s pretty straightforward,for example sweetcorn goes in the ground 18” apart. When they first go in they look pretty lost and lonely but you know that they’ll be near touching each other in just a couple of months.

With a border of bushes things are a bit more complex. There are guides or the plant labels will tell you the eventual size of a plant and how long it will take to achieve that size. Those sizes and times will depend on the growing conditions though, so they’re not set in stone. 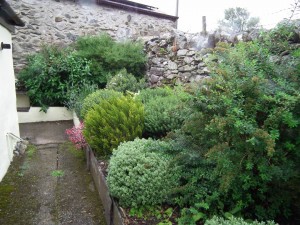 Sometimes those sizes are not accurate, we had two ‘dwarf’ conifers in pots at our last house that towered 12 feet high when we left, three times the promise on the labels!

So planning a border is not just calculation but also a mixture of educated guess and luck. Here we know buddleia (butterfly bush) do particularly well, we’ve some self-seeded around, and they tend to grow quickly so the biggest space in the new border is given over to the plant starting from the smallest. The conifers I know will be fairly slow so they’ve not had a lot of space. My best guess is that it will look properly filled in three years and probably need some pruning in five.

There’s a border behind the house that we planted up three years ago We’d popped some hebes in that we thought were slow growing but they’ve leapt up and generally the border has done far better than expected being as it is shaded by the house and a high wall so some re-organising and transplanting beckons come the late autumn to relieve the over-crowding.

2 comments on “Planting a New Border”