When you look at the recent history of growing and farming there have been some major steps forward. First was an understanding of fertiliser, the effects of the NPK trio. Yields were increased beyond anything achieved before by the addition of fertiliser.

This led to an attitude towards the soil as purely being an inert growing medium. Something to support the roots but otherwise it’s structure and life were of little importance. Scientific growing would consist of sterilising the soil, adding fertiliser and standing back as the plants grew. There were problems from over use in farming but generally those days are behind us due to regulation and simple economics that overfeeding is inefficient.

The latest step forward is that we are starting to understand the soil’s ecology and its importance. Soil does so much more than just support the roots.

Mycorrhizal fungi, for example, have been shown to have an effect far beyond what was previously thought; enabling increased uptake of nutrients and promoting growth.

This leads me to some new (to gardeners) products I’ve been sent that have been available to the farming community for some time. These products are produced and marketed by company called Envii, who work closely with firms in commercial agriculture.

What they’ve done is to bring some of the latest products from the commercial farming side to the domestic. For example, their feed and protect was available in 1 tonne quantities, enough for 50 hectares. Bit more than the average allotment! They now supply this in 500 grams – enough for 250 M2, an average allotment plot.

Feed and protect does two things. First it’s a micro-nutrient foliar feed. Nothing too revolutionary in that, it’s been known that micro-nutrients like vitamins are vital to strong healthy plants and I’ve used seaweed solution for this for many years. 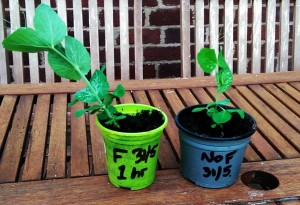 It’s the second thing that’s remarkable. The substance makes the plants distasteful to slugs and snails. It doesn’t kill them, it just makes them unwilling to eat the treated plants and that’s the result we want.

The next product is revolutionary. It’s called Foundation and consists of a mixed culture of bacteria and fungi that is added to the growing medium prior to sowing. It’s simple to use, a tablet is dissolved in water and then the compost or growing bed is watered with the product.

It makes a big difference, especially in the early stages, reducing plant disease and mortality whilst improving vigour and growth rates.

The secret is in the mix of microbes which:

They tell me that Foundation has also been tested commercially on potatoes supplied to a well-known oven chip company. Independent tests on Shepody variety saw 5% increase in yield but also a 42% increase in quality (skin finish, etc.).

I’m currently trying Feed & Protect but I think it will be next year when I give Foundation a good test. Exciting stuff! The products are available here: Envii

For all these developments, reading one of my old books on gardening what strikes me is how much is still the same. I’ll get my hoe, because the weeds still grow!

4 comments on “Pro-biotics, The New Wave?”