I got an email following my last post about the lawnmower asking basically why I was mowing the field rather than letting some sheep on it. Incidentally you can always use the comments section below to ask questions relevant to the topic, rather than an email.

The answer is two fold. Firstly, I’d have to fence off the raised beds, comfrey plot and some sapling trees or the sheep would devour them. That’s a fairly big job and fencing isn’t cheap. 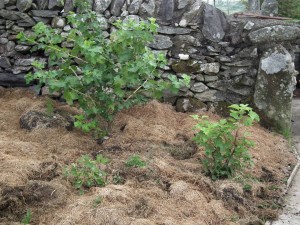 The other reason is I want the grass clippings. Generally gardeners look on grass clippings a problem. When you’ve a large amount, they become hard to compost, forming pads across the bin that seem to take an age to actually rot down. Many actually put them in the garden waste bin and even pay to have them taken away!

You can compost grass if you can mix it with enough other materials but for my money it’s really useful as a mulch. Laid on thickly enough, I’d say 15cm or 6” in proper money minimum, it suppresses weed growth. Not all of them, but most of them. Those that do pop through can easily be hoed off under the mulch and will, eventually, die off.

A mulch also helps retain water in the soil by stopping evaporation at the surface which draws up from below by capillary action. When it does rain, the rain is initially absorbed by the mulch and then trickles down into soil below. This gives much better penetration and prevents run-off.

Over time, the grass mulch is taken into the soil by earthworms which are so valuable and important to good soil management. Because it shelters the soil below, it encourages the worms to come up. The additional humus it will form should help to increase the worm population.

Most of the mulched areas I have are around the fruit bushes so cultivating in the way of digging is likely to damage the roots, something my friendly worms aren’t going to do.

In the spring rake of the mulch if there is a fair amount left or leave in place if thin. Then add a layer of garden compost and or well rotted manure as thick as you can afford. Mulch again over the compost layer.

With very poor soils, like mine is currently, a spring feed in addition to the compost is beneficial. Fish, blood & bone or pelleted chicken manures are good. A slow-release general purpose fertiliser is a good alternative.

Do check the pH every couple of years and if necessary apply lime in the autumn. The winter rains will wash the lime down into the soil below.

In ten years or so, the bushes will need pulling out and replacing. By this time, hopefully the soil will be much improved and benefit from digging over or rotavating prior to re-planting.

One last note: if the grass has grown so long it’s formed seeds then your mulch could be seeding the protected area with grass, not the best plan. Hot composting if possible is a better plan.

5 comments on “Mulching with Grass Clippings”