Since my last entry, I’ve been away for four days and we’ve had a royal visit, my Mum. I wanted to spend as much time with her as possible since we won’t get that many opportunities in the future. She has Alzheimer’s and it’s beginning to affect her noticeably.

I had to grab some time in the greenhouse, the tomatoes are growing so fast and need side shooting and tying to the stakes regularly. A good watering takes about 120 litres, not a small amount.

I’m often asked how frequently and how much water tomatoes require, which may be a simple question but it is one that doesn’t have a simple answer.

There are two factors that determine how much water is needed, the weather and the size of the plant. As they grow, they use more water and obviously need more in hot weather than in cool.

The critical thing is not to let them dry out. The classic sign of a tomato that has been thirsty is cracked fruit. That’s why I prefer growing them in a border rather than a container, you’ve a good reserve water supply in a border. 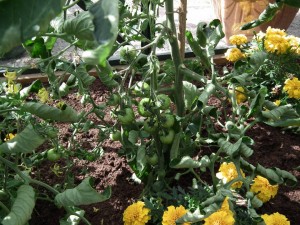 As the fruits are swelling, it’s time to feed. If you think about it, tomatoes grow tremendously and produce a huge amount of fruit per plant. To do this they, in turn, need to be fed well.

This year I’m feeding with Chempack tomato feed, it’s not too expensive and it has a lot of trace elements, micro-nutrients. Don’t under-estimate trace elements, they’re the vitamins of the plant world. I mix enough for 100 litres in 10 litres of water in a can and then add that to my 100 litre water butt in the greenhouse.

Whilst the plants are growing (before stopping them at 5 or 6 trusses) I swap to Miracle Gro which is high in nitrogen and balanced for growth rather than fruiting for one feed a month. 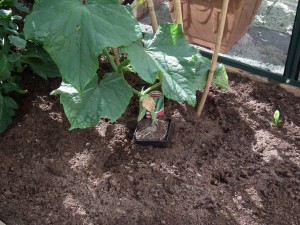 Cucumber in bottomless half pot, to raise the stem

These get fed just as tomatoes which works well. Because the cucumbers produce so much foliage, I tried a high nitrogen fertiliser in the past but it seemed to make the fruits watery.

When feeding and watering cucumbers, avoid getting the base of the stem wet. Given half a chance, it will rot and you’ll lose the plant. It’s odd that a plant that needs a lot of water is so susceptible to rot but that’s how it is.

The new format newsletter went out on schedule. I asked people to let me know what they thought of it and all but one said they much preferred it. I have noticed some people aren’t getting the newsletter although they signed up for it. The problem is that some mail systems think it’s junk mail. I’m afraid there’s not much more I can do to stop that. If you have signed up for the newsletter and it’s not arrived, check your junk folder or contact your ISP and ask them to let it through.

Friday we got home late having spent most of the day driving home. I was just about ready for bed when Val checked the weather forecast and told me a storm was on its way. 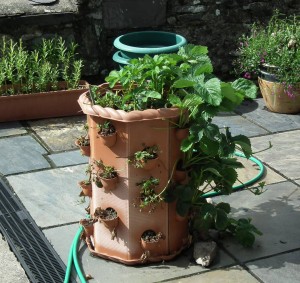 Strawberry Barrel, half eaten by sheep

So, out to the greenhouse by torchlight, closing the vents and locking the doors to prevent storm damage. What a storm it was – at one point there was less than a second between flash and bang. I thought the house had been hit when a huge crack sounded but luckily all was well and no damage found the next day.

Half the strawberries, all on the same side, have gone from the barrel on the patio. They’ve just gone. Behind the greenhouse the young fruit trees are leafless, almost pollarded. Over in Val’s decorative border, the camellia is leafless and the lupins have vanished completely.

Forensic evidence indicates the culprits by a number of sheep deposits left nearby. The sooner they are off to market the better.