The weather is pretty foul here at the moment. Wind, rain and so dark it’s like dusk at midday. Over the last two days we’ve had about 100 mm of rain and probably double that in total over the last week. 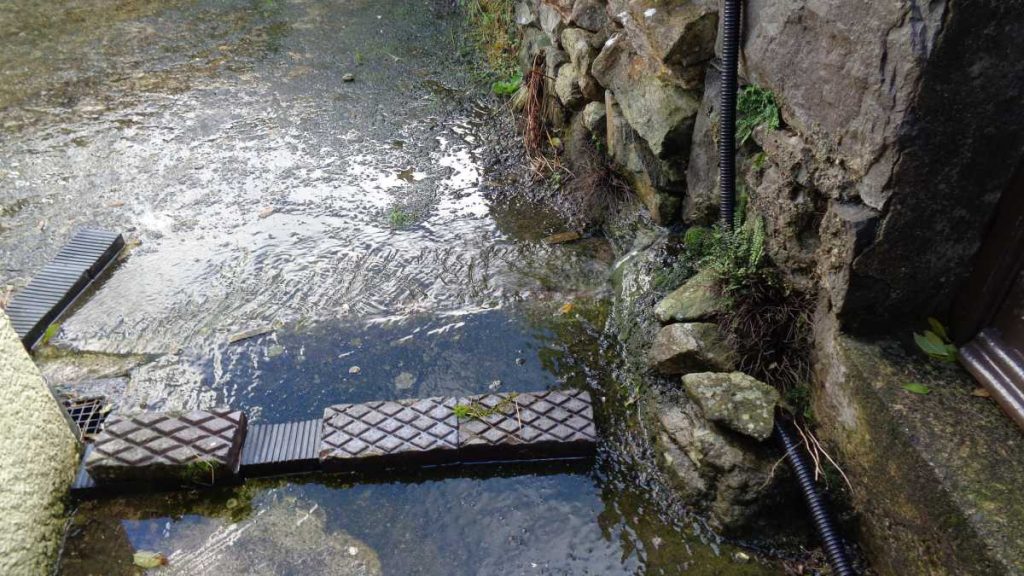 Water pouring from the base of the retaining wall following heavy rain.

The land is totally saturated. The topsoil isn’t that deep, although it is getting deeper, but it generally drains well. Over the years we’ve increased the organic content making it more sponge like. Now that sponge is full from bedrock to surface.

The retaining wall at the back of the house has a drain pipe a couple of feet from the ground on this side, about a foot below the surface on the land side. This has a steady light stream of water pouring out.

Well water finds its own path and at the very bottom of the wall it’s gushing out and flowing down the drive. I’ve built a sort of temporary dam with bricks to direct the flow into the drain but it’s only partially successful.

A clip of the stream from the wall with a disgruntled Lotty cat!

Gap in the Rain

Since we’ve a gap in the rain, some clearing up on the patio. The lobelia has finished and we quickly pull that out, filling the nearby hot composters. Then into the greenhouses, clearing all but a few tomatoes and a couple of sweet peppers from the Vitavia.

The chilli peppers all came in as well and the dryer will be going for a couple of days. Once they’re properly dried out, into the grinder and they’ll be chilli powder adding a little zing to dishes. It’s surprising how many chilli peppers it takes to make a jar of powder, efficient storage.

Squelching to the Spring

Up to the raised beds, squelching with every step. I can only recall it being this wet once before. When I got up to the beds there was water bubbling up from the ground like a spring. I’ve never seen that before here. I assume the water is travelling downslope under the surface and then hitting some rock barrier, forcing it upwards.

We’re certainly seeing more extreme weather events than we did 20 years ago. This year I had to water a lot to keep things going in the summer, not normal for this bit of Wales. Now it’s the opposite. Rain isn’t unusual but this volume in a small time is.

I’m seriously wondering about hiring a digger and constructing a swale / ditch feeding a pond to store some excess water from winter. If we have more dry summers, having an independent water store could be useful. On the other hand, it may be cheaper to reinstate a disused well we have or buy some IBC tanks. But a pond would be nicer.

Time for a hearty winter stew. 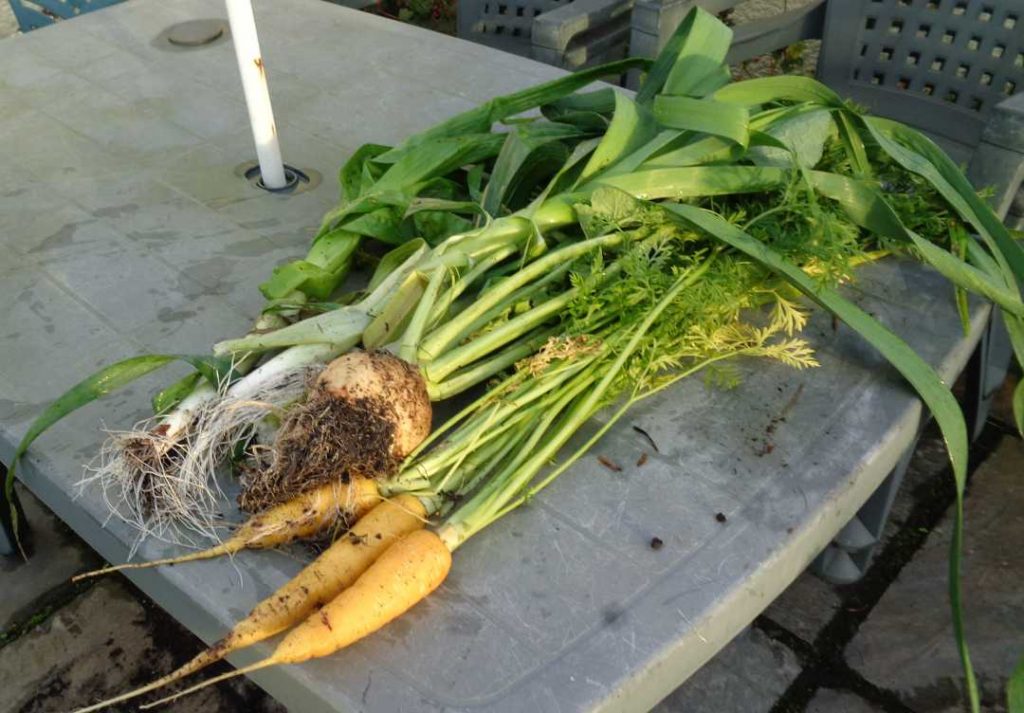 Some of the stew ingredients prior to trimming for the cook!

First off, a parsnip. These are a real success this year. Large, nicely shaped roots – so far at least. I expect I’ll come across a multi-tentacled monster eventually. I think I may have overproduced with parsnips this year, but that’s better than underproducing.

Then I pulled a few carrots. I’ve not done well with carrots this year. I’ve made multiple sowings, using seed from different sources but extremely poor germination. My daughter sowed half a raised bed with a yellow carrot ‘Jaune Obtuse de Doubs’ from Real Seeds and they’ve done really well. I must be losing my touch!

Next on the list, a few leeks. I’ve a couple of small beds in the polytunnel that we’ve been enjoying for some weeks now. The outdoor beds will take over when the polytunnel bed is finished.

Then a swede on the way back from the walled garden. I’ve tried a new way of growing these which hasn’t worked too well. By starting in modules and planting in holes in weed matting I hoped to avoid weed pressure. All went well except the swedes have grown under the matting, being too big to get through the holes.
I think being under the matting has stunted them as well as making harvesting a pain. Still. if you don’t experiment you don’t discover these things.

Throw in a turnip, onion and garlic from our store and we’re all set. Apart from a bit of Welsh beef and a handful of lentils, basically all from the plot. It’s a good life, if we don’t drown.