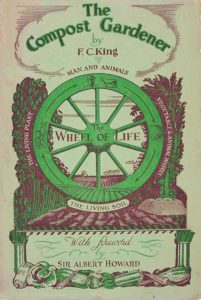 The book contains a foreword by Sir Albert Howard, a famous pioneer of the organic movement and the man who brought the Indore method of composting to Britain from India. Sir Albert met Mr King when he was evacuated from his home in Blackheath, London in 1940 to Heversham which was just a mile away from Levens Hall.

Levens Hall’s ten acres of gardens date back to 1690s including the world’s oldest topiary gardens. Even though the days of estate gardens were fading following the First World War, being Head Gardener of something like Levens Hall was a very prestigious position.

As you may infer from the title and association with Sir Albert Howard, Mr King was a proponent of organic growing. He actually uses the term ‘organic’ in his book. This was not common parlance at the time.

The book was first published in October 1943 and my copy is the second impression from May 1944. It’s a fascinating work and whilst I can’t pretend to agree with all he says, some of his ideas and assertions are both interesting and thought provoking. Where a statement caused my eyebrow to raise, I kept in mind that it must have worked for him. Head gardeners do not last long in the job if their methods fail. 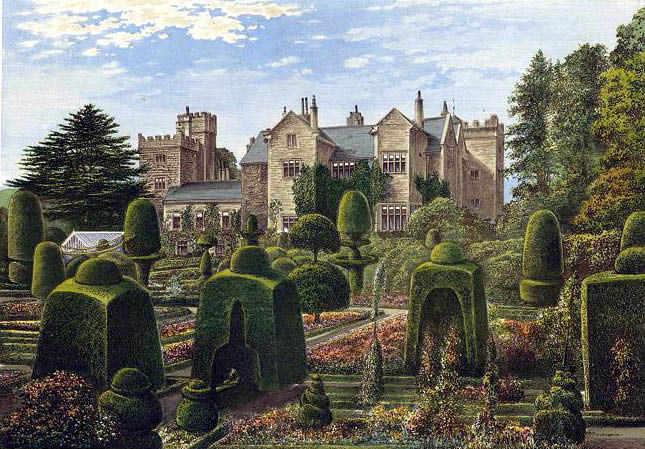 In some ways they were rather like today’s top football managers, poached to different gardens and tied by contract. The aristocratic owners of the stately homes relied on their gardens to grow superb produce for their tables when entertaining guests and playing games of one-upmanship. During the war the emphasis was on volume, of course.

Mr King was a bit of a maverick, his methods were very much at variance with the accepted wisdom as enshrined in Dig for Victory. Not least in his vehement condemnations of artificial fertilisers. He actually says;

I admit my views are revolutionary in many cases, but evidence is continually pouring in to prove that others who have adopted the same principles are satisfied with the results.

He claims that growing using compost prevented everything from damage by pests like caterpillars and slugs to pigeons eating the crops. I so wish it were true. Incidentally, when he uses the term compost, he seems to include using manures and his favourite additive, sewage sludge.

Where his work is, in my opinion, really radical and intriguing is his attitude to weeds. Whilst he doesn’t advocate sowing them, he looks on them as a benefit, protecting empty soil. I can see this as it’s a tenet of permaculture not to leave soil naked. When ‘harvested’ the weeds become compost material. Remember convention wisdom, even more so then than now,  is to hoe, hoe, hoe!

During the late summer and autumn every effort should be made to secure a good crop of weeds, for without a carpet of weed much of the soil fertility is lost.

Surprisingly I find no mentions of green manures which were not unknown albeit uncommon in that period.

He actually uses weeds when growing onions to remove nitrogen from the soil during the ripening process at the end of their growth, thereby ending up with bulbs that store better. Maybe I’ll give that a try myself.

It was interesting where he suggests varieties to grow. Many I’ve not come across that are unavailable today but many that I have. Onions like Ailsa Craig, Bedfordshire Champion and James Long Keeping. Cabbage like Wheeler’s Imperial, French beans like Canadian Wonder and leeks The Lyon, Musselburgh. Gardening changes but the foundations remain. 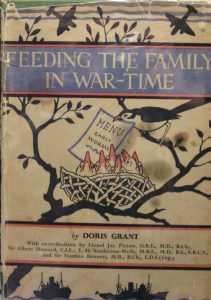 Feeding the Family in Wartime

Feeding the Family in Wartime

Another contributor to the work was Mrs Gordon Grant (Doris Grant) with a three page excerpt from her 1943 Feeding the Family in Wartime. Air Albert contributed to this work as well along with others.

In this she recommends cooking methods to improve the vitamin content of food and makes this comment regarding Vitamin C. I found it struck a chord with me as I often hear people saying that blanching isn’t necessary when freezing food. Blanching, of course, destroys the same enzyme.

As soon as vegetables are cut, or shredded, vitamin C is gradually rendered inactive by a substance in the vegetables called an enzyme or ferment. This substance, however, is itself killed at a temperature just under boiling point. The quicker this enzyme is killed by means of water at boiling point, the less loss there will be of vitamin C.

One thing this book really proves is that gardening has had it’s alternative practices for a long time. Those who think organic and alternative methods are new should take note. One of my interests is regenerative agriculture, improving the land. This has become awfully trendy of late. But once again, the methods were well known some 80 years ago at least. Most probably longer than that.

15 comments on “The Compost Gardener by F. C. King”