The weather isn’t exactly seasonal, a plague of snails swamping us but tomatoes by the bucket load and French beans by the kilo. 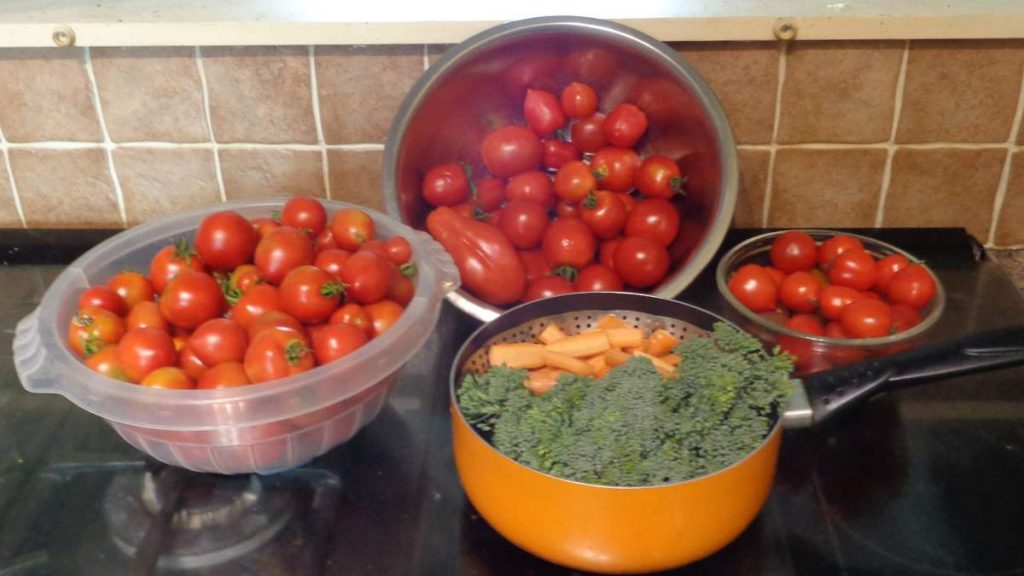 Tomatoes coming in thick and fast, my calabrese and carrots for tea in the pan.

I went out to put something in the bin the other night after dark and there, on the patio, were loads of snails slithering towards the flowers. Went back to get a torch to see better. Well, I collected 29 snails and 5 slugs!

The next day we collected another dozen hiding in the trellis on the house wall. It’s really getting beyond coping with the hordes. Found six in the greenhouse the next day as well. Yet I’ve only found a couple in the polytunnel. Whether that means there aren’t any in there or they’re better hidden, I don’t know.

The mini-heatwave is but a memory now. We didn’t have it as hot as many places, but it was more than hot enough, thank you. The weather is all over the place nowadays, which is concerning. We’ve had a good couple of inches of rain in the last days and there’s not a day ahead on the weather forecast without rain.

Currently we’ve got sunshine and showers like April but with summer’s warmth and strong winds gusting to 70 mph. This is not the August we were hoping for! We’re used to working to the rhythms and cycles of the seasons, once they are disrupted so is our growing. It’s amazing we get a crop at all when the weather is so weird.

We’ve enough tomatoes to open a tomato shop. Initially the early spring heatwave was too hot for them and then the weather snapped over to cold when it should have been warming, which didn’t do well for them. Now they’re coming good.

I’m disappointed with the San Marzano, the famous Italian plum variety. I reckon it would produce more in the consistent warmth of Italy than our climate. They certainly appeal to the snails, we’ve had some damaged by the little beasts.

The surprise this year has been Red Alert. Noted as an outdoor tomato, I popped some into the polytunnel. It’s just too challenging here for outdoor tomatoes, most years. Very easy and productive, heaving with fruits.

This year I decided to just grow climbing French beans in the polytunnel and the runners outside. Trusting in a strong support frame, I thought we’d be OK with the runners. Well, the snails enjoyed eating the plants.

I was worried the French beans weren’t doing well in the polytunnel, so planted a bed of dwarf beans in one of the raised beds, hoping for a late crop with a bit of luck. It may be cool here but it’s mild so a pretty long growing season.

Anyway, suddenly the polytunnel beans are producing well. From one picking yesterday we got just over 2 kilos of beans. Val prepped them and I blanched them for the freezer. We find the easy way is to bag them into portions – so 10 portions of beans are now chilled down and ready to provide when the fresh run out.