I’m still being cautious after the cataract surgery – last thing I want to do is set back the surgeon’s fantastic work. But a little careful time in the greenhouse. Harvesting some exceptional tomatoes and cucumbers, results of a couple of experiments with alternative growing methods. 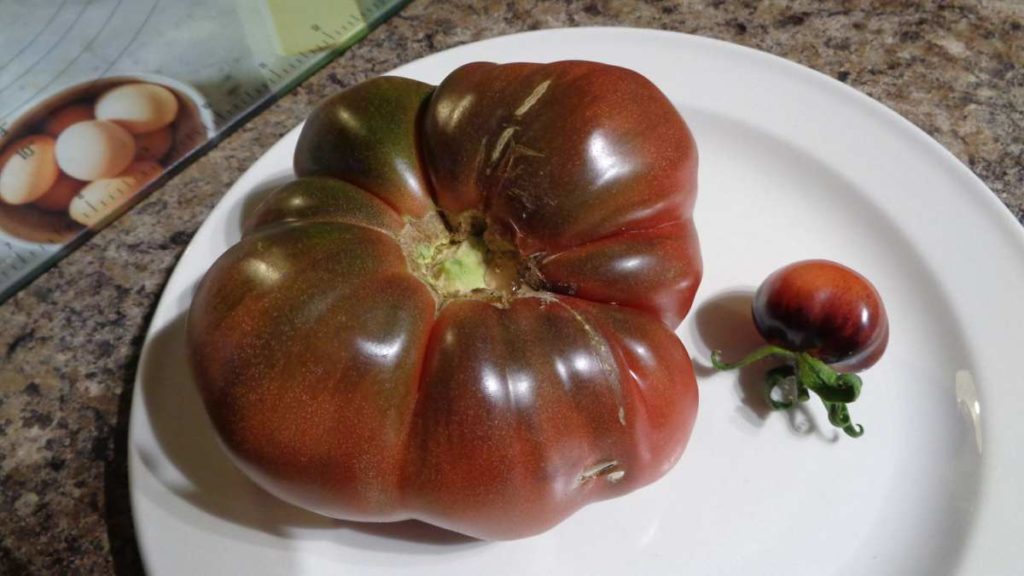 We really like Black Russian tomatoes. They’re generally large, very juicy with a rich flavour. We make a simple tomato salad with them Slice up, sprinkle with a little garlic salt and drizzle with olive oil. Leave for a few hours for the flavours to mingle. Add some small cubes of feta or a hard goat cheese and some decent crusty bread to soak up the oil and juices. Heaven on a plate starter, snack or side dish.

This baby was exceptional – 496 grams. 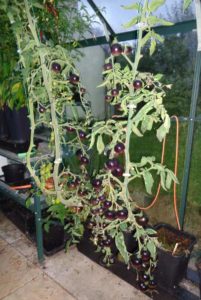 Now this is an odd tomato. It starts green and then most of the skin goes a shiny black colour except for a patch around the base which stays green. The black is not an indicator of ripeness. I’d read that the green would turn a sort of rose red when it was ripe but was beginning to doubt it was ever going to. Well, one small one has finally turned and it looks like the rush is about to start.

Val tells me that they’re a lovely flavour .. hopefully I’ll get to find out for myself soon! She’s been busy experimenting with a red tomato chutney recipe. We’re ending up with 15 small jars – variations on the theme.

Hopefully there’s loads more tomatoes to come – unless the dreaded blight gets them first.

I tried a little experiment this year, planting tomatoes very deeply. Normally I plant with about 10 cm of the stem under the soil but this time they were about 25 cm deep. I won’t bother with that again. The lowest trusses were lying on the soil and suffered from slugs and snails. Growth was no better, if anything worse, than usual.

I also tried an old method where the tomato is planted almost horizontally and then naturally curves upwards and goes up the support. Well that was another fail in my book. I planted a Cherokee that way but it never really took off and then Sammy Snail came along and ate through the stem.

I think it’s important to experiment and try new ideas out. That’s how we progress, after all. Often our failures have more to teach us than our successes. In which case I’m very well taught! Next year I’ll probably just keep it simple and stick with my proven methods. Well, wait and see! 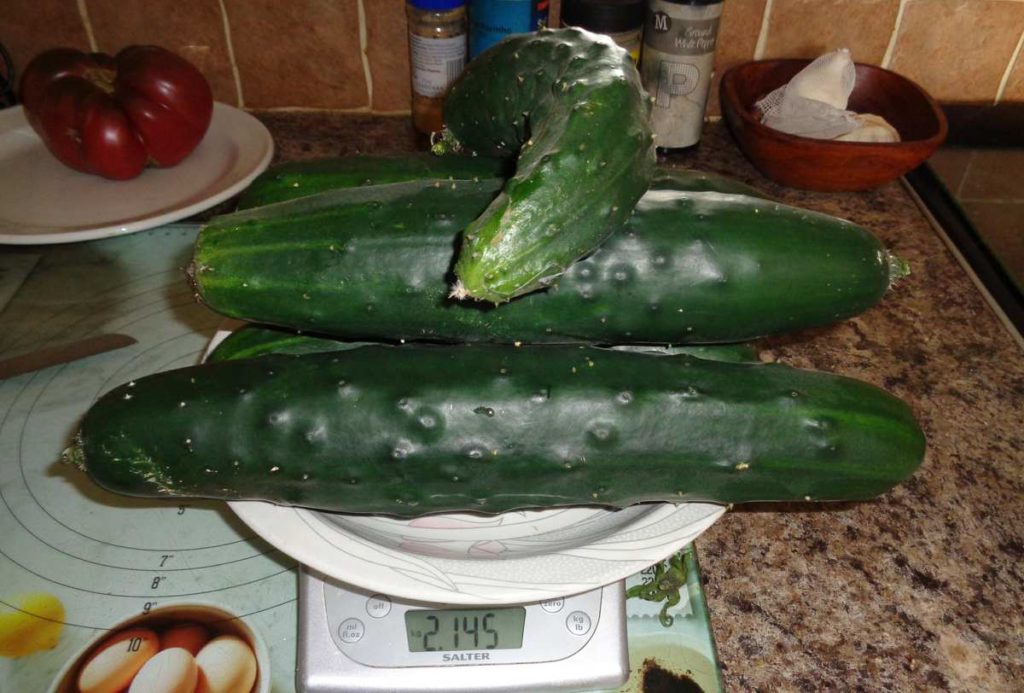 As the gherkins have finished, I’m down to one cucumber plant. It’s been a slow development but now it’s really living up to its name Marketmore. My daughter came round and she’d said she could use some cukes so I nipped out to the greenhouse and came back with 2.145 Kg of fruits!

Val converted a kilo into a smashing soup with some potatoes and cheese. A portion for the freezer, a gift for our neighbours and one for us now. Another cucumber went into that classic Greek dish Tzatziki (just call it tizzy tocky, like we do!)

Only three left in the fridge until the next flush..