Sometimes it’s easy to get the wrong end of the stick. I’m afraid I managed to convince some visitors to our fair land that they might have blundered into the land of the crazies. All will become clear. 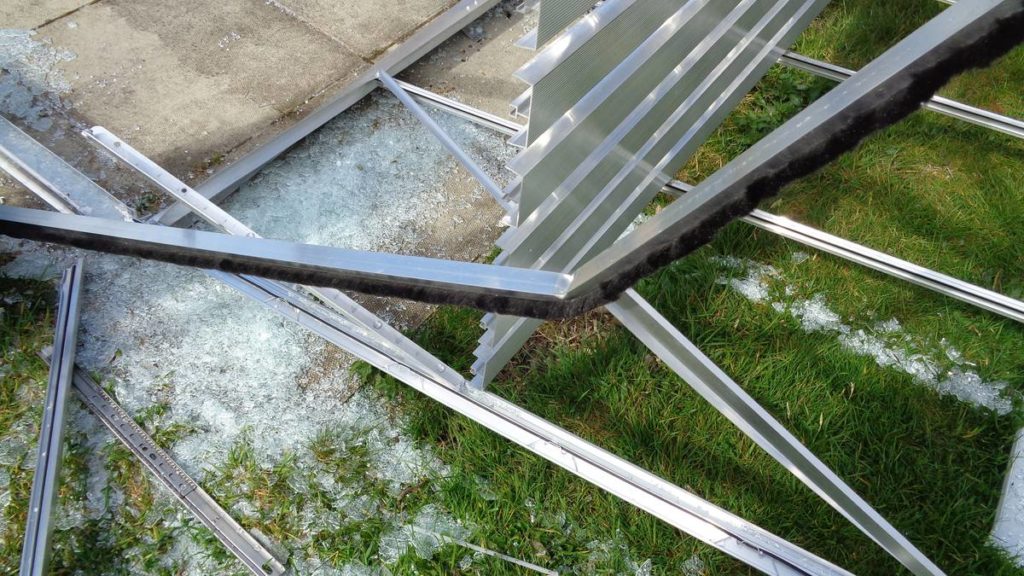 Broken Glass in the Grass

The insurance company have sent their chap out to photograph the greenhouse in case I was faking the damage, so no reason not to start clearing up the mess. A remarkable amount of the glass actually survived intact but some sheets didn’t – as you’d expect.

Tempered glass is remarkably tough but if you catch it the wrong way, bang! It’s break safe in that it goes to small, pea-sized fragments so avoiding the dangers of large shards that you get with ordinary glass. But, this is the thing, they’re a right pain to clear up and they can still give you nasty little cuts.

Not so bad sweeping up from a hard surface but getting the pieces up from grass is a nightmare. I have a cunning method though that makes the job easier if not exactly easy. A vacuum cleaner.

I’ve got a workshop vacuum which has a powerful suck so trundled that out of the shed along with the extension cable. I thought I’d empty it before I started which revealed a problem. It must have sucked up some water and the paper filter had become wet and disintegrated.

We have the technology, we can rebuild it!

Without the filter bits of glass would get into the motor and I’d be lucky if the vacuum survived 5 minutes. Well, we have the technology! Horticultural fleece. I cut a piece to size and double wrapped the old filter cylinder. I used some polypropylene string to tie it on. Traditionally around here baler twine is used to fix everything, but near enough.

It worked a treat, just as good as the old paper filter as far as I can tell. It’s still a time consuming job but the bits of glass get sucked up and rattle down the pipe. So there I am, vacuuming the grass when a group of walkers came up the track

It was obvious from their faces that they thought I was completely off my trolley, round the twist and away with the fairies. I thought about wandering over to say hello but they’d probably have panicked and run for it, lest I get violent!

The moral is – just because somebody is doing something that seems mad, doesn’t mean they are mad. But it’s a fair bet that they are anyway.

6 comments on “Madman of North Wales”