Tree Blown Down – Yet More Compost

On Sunday I made a start sorting out the polytunnel. The climbing beans are now finished as are the dwarf beans. Still, we’ll get about three meals off what I gleaned whilst clearing the plants. The tomatoes in hanging baskets are near the end too. If the frost don’t get you, the botrytis will!

Harvested some nice carrots (Amsterdam Forcing) from the polytunnel – they’re so sweet and flavoursome when they’re just pulled. The sweet peppers are still going well and the chilli peppers are surprisingly big but not reddening which is a bit odd.

Tree Blown Down in Storm Callum

As I came out of the polytunnel, I noticed something was changed. It took some seconds before I realised what it was, one of the windbreak trees on the edge of the orchard, a rowan, had blown down in the storm. It looks like the core had rotted, so weakening the tree.

I’d describe it as a small tree but it still took 4 hours to chainsaw it up into manageable logs. These will eventually convert to potash after warming the house in the stove. Cutting it up is quite an enjoyable job, really. Not too strenuous but requiring some thought and care. Trick is to take it slowly, cutting off the small branches and clearing them out of the way until you can get to the trunk. The last thing I need is to get tangled up or trip over whilst using a chainsaw.

Chainsaw’s require protective equipment and awareness that one second of carelessness can mean hours in A&E – if you’re lucky . The most dangerous time with chainsaws is when you either get tired or casual about using them. 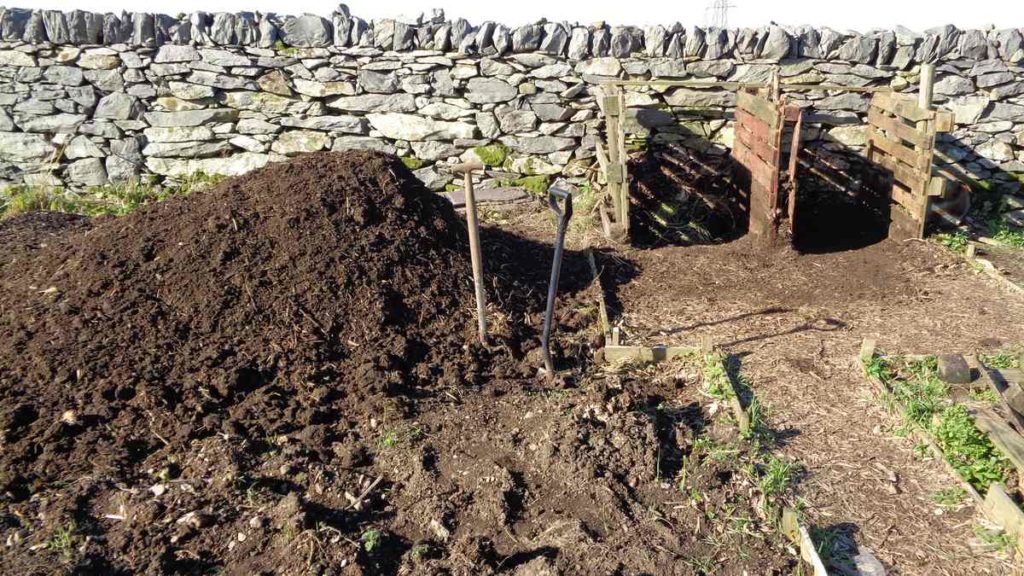 Pile of compost from the bins to the right. Time to start filling them again.

Monday’s weather was gorgeous. The sun was shining brightly from a hard blue sky with just some wispy white clouds about. My neighbours came down with their trailer and 4×4 so another load of compost was transported up to the veg plot.

Up on the veg plot I’ve a couple of compost bins just made from pallets. Very basic, but they do the job. Both were full and so I’ve been taking green waste up to the bins on the field plot. Obviously emptying time. I’d estimate 2.5 cubic metres, a bit over 3 cubic yards of compost. It’s difficult to be accurate but I reckon I’ll have added about 20 cm in depth, which is 8 inches in real money, across the whole plot when I’m finished.

There should be a fair amount of nitrogen in all that compost which will evaporate over the winter so I’ve decided to sow some field beans green manure to fix it when the compost is spread out over the plot.