This email from a newsletter reader raises the question of how best to use woodchips on an allotment. Woodchips are a really useful resource but you need to use them properly for best effect. 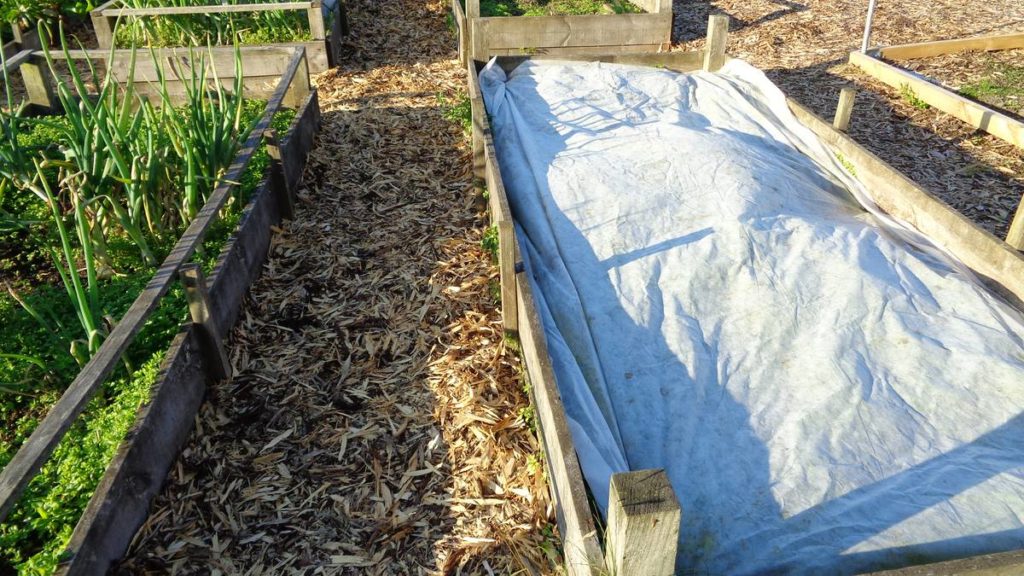 On my allotment we have access to fresh wood chips and there is disagreement about how best to use them. I advocate spreading it on paths that are slippery and letting it decompose there for a few years before using as a mulch. I’m a no dig gardener. I’ve found that if a pile of wood chip is up hill from a veg bed the run off will make the crop suffer… lack of nitrogen I think.
Some gardeners want to dig it in to the clay soil after a season in a pile just thinking to improve structure, but I am worried about what else it will do the the life in the soil
I’d welcome your opinion

I use wood chips a lot, can’t get enough of them, but you do need to keep in mind that they are very high carbon but low nitrogen. The C:N ratio is usually around 500:1. This means that they can be useful in composting as a brown if you’ve a surplus of greens – but use frugally because of the super-high carbon.

This high carbon means they are great for paths. Their decomposition sucks in nitrogen which means most weeds and grasses just can’t grow. Some deep-rooted weeds may be able to grow through them if they’re already established.

Once decomposed and no longer actively sucking in nitrogen they become a humus rich material which can be used as a mulch or soil improver.

You may have heard of ‘Back to Eden’ gardening which is basically growing through a mulch of woodchips. Obviously this retains water and prevents weeds growing. Having sat through a video on the subject, I noted that it was mixed with chicken manure which is very high in nitrogen.

There are some claims that a woodchip mulch sucks little nitrogen from the soil as only the base is in contact with the soil. I admit I’ve not tried it but that’s because I find it very hard to believe.

I’m quite interested in regenerative agriculture and follow Richard Perkins videos about his permaculture farm in Sweden. This year they’ve had a load of compost made from woodchips which he’s quite pleased with if only because of it helping to retain water in their drought. They grow on a no-dig method adding 5 cm of compost to their beds each year.

Adding decomposed woodchip compost to the soil, whether clay or sand, will improve it by adding humus. A pure woodchip compost will be low in nutrients but humus alone is a benefit to any soil.

I believe the key to improving a clay soil is most often increasing the pH. The addition of lime improves flocculation – the formation of particles – which makes the soil more friable and open.

Adding partly decomposed woodchips to a clay soil will eventually improve it so long as the clay isn’t so solid as to form an anaerobic layer above it, preventing decomposition. As the woodchips decompose they will be utilising available nitrogen so the soil will be depleted with a negative effect on plant growth. Quite what the effect of removing nitrogen from the soil’s eco-system would be I don’t know but I can’t see it being beneficial.

I did find adding large amounts of turkey litter beneficial to a clay soil. This is effectively small woodchips or large particle sawdust which is mixed with nitrogen rich droppings. It was added as a 20 cm layer in the bottom of a trench above forked open clay sub-soil. The topsoil being replaced over the litter.

So my opinion is that adding partly rotted woodchips to the soil will, at best, have a negative effect on crop growth for a season unless balanced with a high nitrogen source. Far better to use it on paths and then use it as a soil improver when it has rotted. In effect the paths become a sheet composter.