Back in Action After the Storm

As you may have gathered from my last post, I was not a happy chappy after Storm Hector’s visit. Still, what you can you do? Weather is definitely ‘circumstances outside of our control’ so you just have to pick yourself up and move on.

My lawnmower has been fixed. It developed a fault, one of the rear wheels was sticking. It’s motorised and I was worried that a stone had become jammed and would cause damage. I looked at taking things apart but couldn’t see how to do it. Mechanical things tend to bewilder me. Unlike plants who want to do their thing – growing and reproducing, machines just seem to want to break.

Anyway, off to the shop with it where there was a nine day wait before they could even look at it. Finally picked it up to find they’d sorted the problem and basically given it a service as well. Great, except the bill was about what I pay to get the car serviced and they usually get it in and fixed when you want.

If I had the mechanical gene, I think a garden machinery repair shop would be a tad more profitable than a garage! Anyway, grass harvesting can resume when the weather permits. 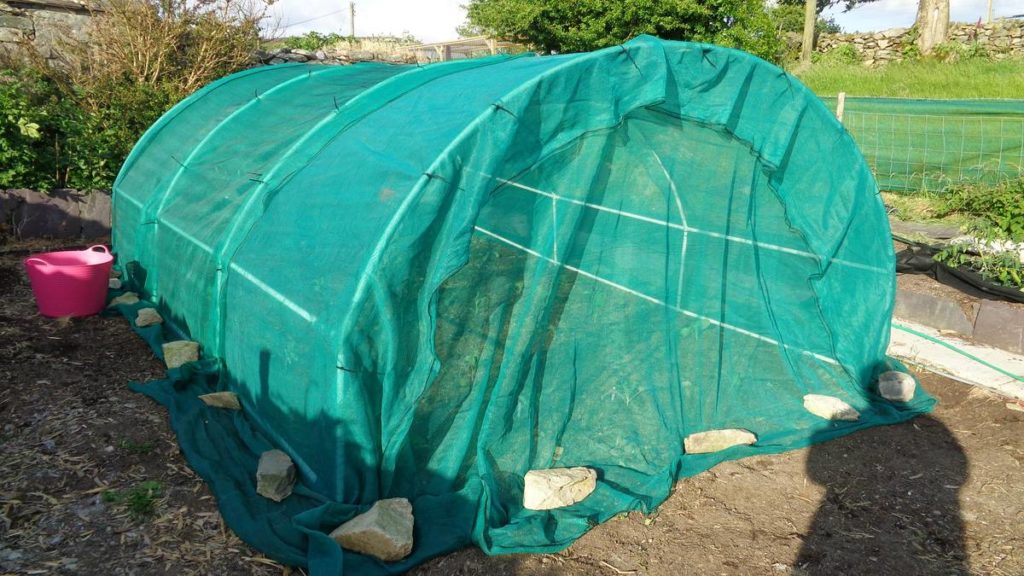 As I thought, we’ve got away with reducing the cage frame by 1 section, cannibalising the good parts to replace the damaged parts. So it’s now roughly 4.5 Metres by 3 Metres. Once the netting was on I immediately started planting it up. The large modular trays I’ve been using for leafy brassicas are great when you don’t get things transplanted on time as they have enough volume to hold the plant well, but they really wanted to get in the ground. 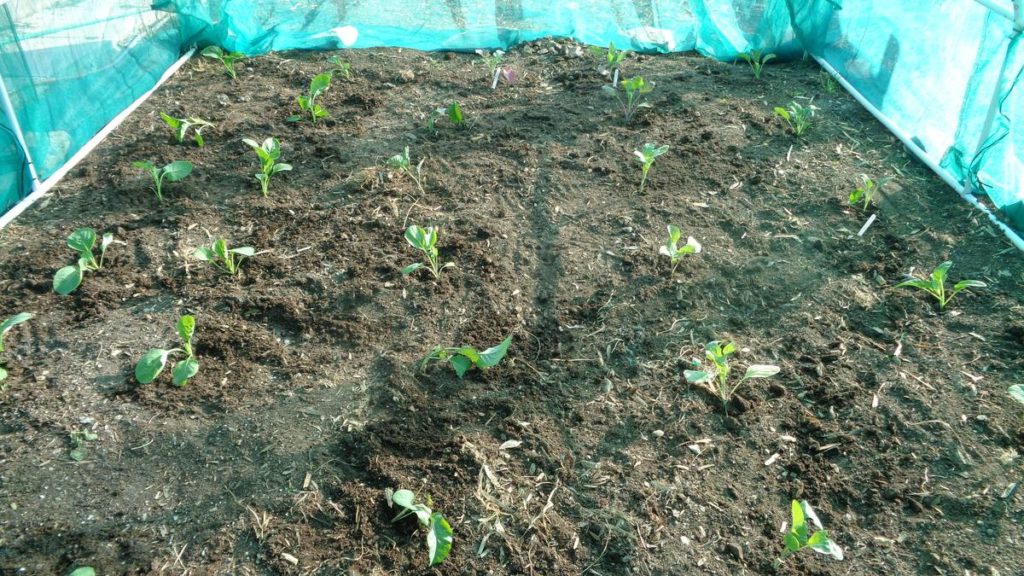 Inside Brassica Cage – Planted Up

The ground was well manured last year for potatoes and has been limed with dolomite lime so increasing magnesium. Just to boost the nutrients it’s had Growmore and nitro chalk. Leafy brassicas like a high nitrogen level.

OK, I’ve got far too many brassicas but that’s not a problem. Some get given away – Cara took about six Hispi away to make sauerkraut and those left too long that start to split and bolt get hung up in the chicken run and converted to eggs.

We’re really enjoying our calabrese. It freezes OK but you can’t beat it fresh. Stores well in the fridge, tightly wrapped with clingfilm too. Apparently my grandson’s favourite vegetable as well. Once the main head is cut the secondary heads grow on, so a two for one deal. Actually, three for one as the leaves end up being converted into eggs by the hens. 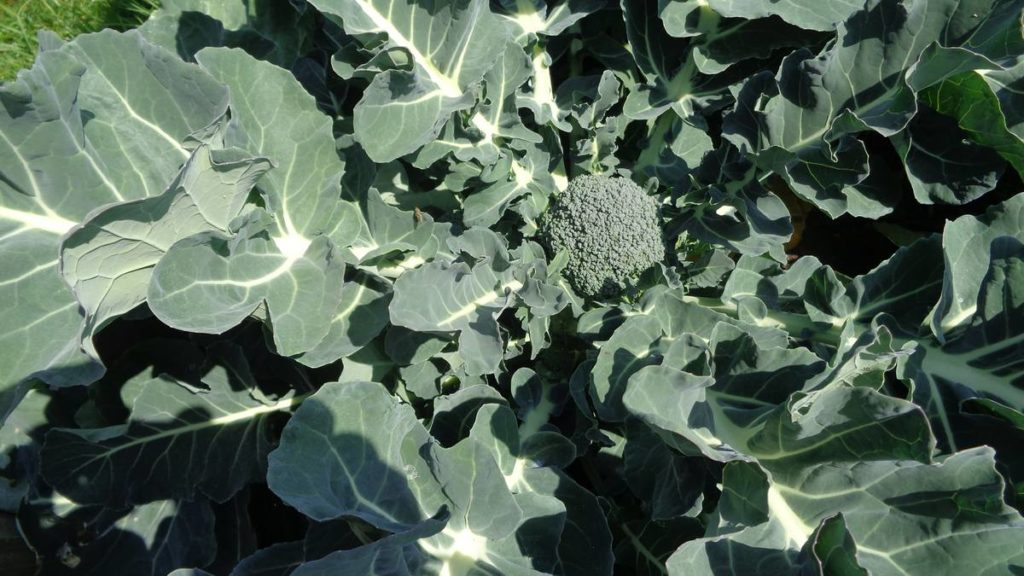 The flying tunnel must have hit the wall with huge force – more than I could deliver with a sledgehammer! There’s a bulge in it that the only way to properly repair is to take down to the base stones and rebuild. That’s over an eight to ten foot length. Beyond my abilities, an expensive job. Anyway, it’s had a mini-repair and it’s stable. 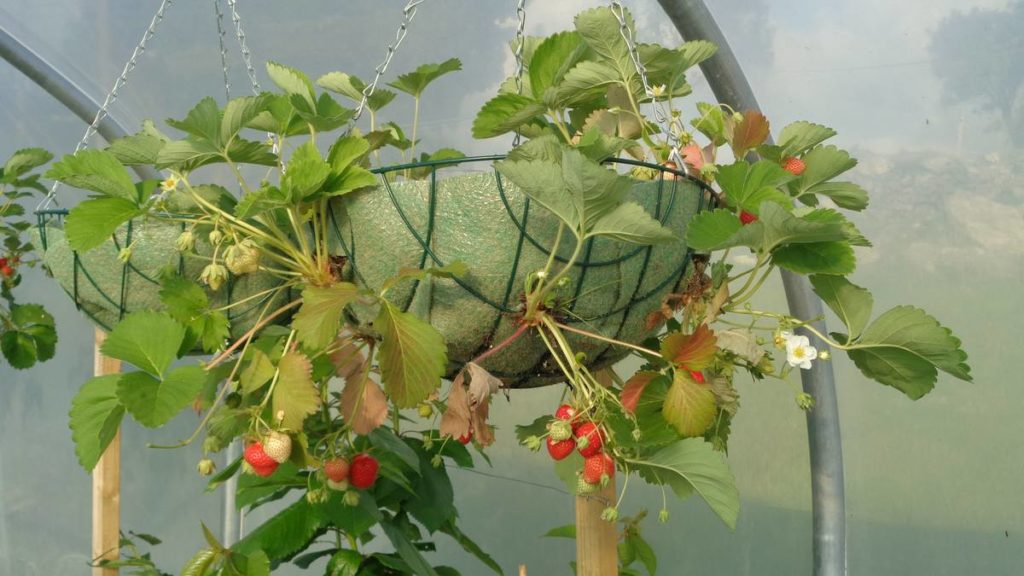 We’ve masses of strawberries which have never performed well outside here. The polytunnel seems to be the perfect environment for them. I’ve got strawberries planted through weed matting under the cherry tree I’m training in there and they’re doing well although we’ve lost a few to the slugs.

The best performers are the hanging basket strawberries. Lovely tasting crop with no slug damage at all. The main problem is they vanish between being picked and reaching the house.

Incidentally, even the slug damaged don’t go to waste. The chickens love them. If the slug is still attached, that only makes them nicer still.