Looking at the weather forecast it didn’t seem that we were going to get hit too badly by storm Hector but I really should realise how bad the winds can be here. When I got up this morning I was happy we’d had some badly needed rain, although not as much as I would have liked.

The greenhouse was looking intact, no damage to the sheds and the coldframes had survived too. Then I went up to the walled veg garden. 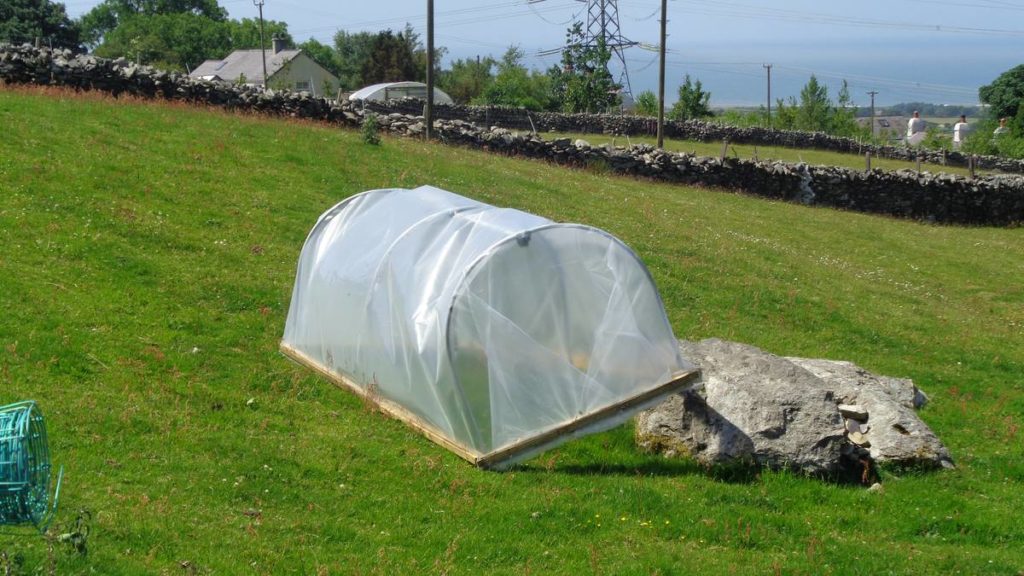 Some time ago I got a mini polytunnel from First Tunnels. It looked like a great way to get more sheltered growing space for me. I was intending to write up a full review over the weekend. Well, I may still do that but the first thing I noticed was that it was missing.

Now we’re not talking a lightweight cloche here, this is a 10 ft. by 4 ft. mini polytunnel with proper galvanised steel hoops fixed to 2 in. x 3 in timber. I don’t know how much it weighs as such but it’s a two person job to carry it.

It had actually blown right across the veg plot, over the 6 ft. dry stone wall and into the front field. Luckily there are no sheep in the front field at the moment for it to land on. From a distance it looked to be in good order but when I went up to it things were not good.

The corner joints of the wooden base were split apart, the horizontal ridge bar had gone through the polythene which was badly ripped as well. As a plant protector it’s very good but it’s not going to make it as a flying machine. 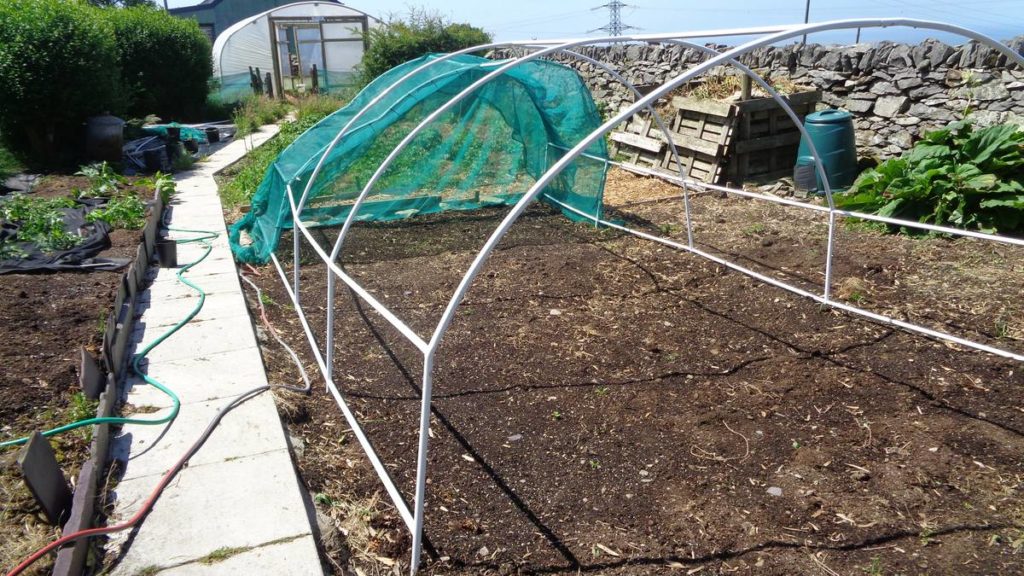 You may recall I had a brassica cage made up from plastic pipes and connectors. It did a really good job, keeping the butterflies away and stopping wind rock from damaging my brassicas. Unfortunately it was tough but not tough enough for here and last time a storm again demolished it I thought it was time to look for another solution.

I’d actually got one of those cheap polytunnels you can get on Ebay before we moved but didn’t even try to put it up here. I’ve seen one or two around in the local area, usually tumbled over and wrecked. I thought about it and realised it would make an ideal frame for a brassica cage.

We erected the frame and sank the legs into the soil to give it a firm hold. Started the process of covering it with netting but I’d only got one of the four sections and an end covered. Because the frame presents no area for the wind to grab I wasn’t in the least concerned about it surviving the storm.

What I hadn’t factored in was the flying mini polytunnel. It was apparent the tunnel had crashed into the cage frame and bent up some of the structure, well beyond repair. A bent and crimped tube just can’t be straightened. I should be able to just reduce it in length by a quarter – so it’s 4 sections will now be 3.

As if that wasn’t enough, on it’s way to the field the mini polytunnel had crashed into the stone wall that shields the veg garden from the open field and sea winds. I need to undertake some repairs and to check it’s still stable.

All in all, storm Hector has managed to set me back. I do love it here but the winds we get are challenging to say the least. Far more challenging than I expected when we came here. I assumed the weight of the mini tunnel for its relatively small size would keep it in place, but the wind threw it around like a kite.