The weather has been absolutely glorious, in fact too warm if anything. Porthmadog, which is just a few miles away from us, has been the hottest place in the UK a few times. Being high up it’s cooler here and we’ve often enough breeze to make it bearable.

One problem though, this weather has pushed things into flowering. The goat willows have catkins and the grass is flowering too. Which means pollen, lots of pollen. And pollen means hayfever. Eyes itching, nose running, sneezing hayfever. That’s despite the pills and potions and remedies.

The worst thing is waking up in the night with it and, despite being in bed for 9 hours actually only getting about 5 hours sleep. The rest of day is spent like a sneezing zombie and every job takes a lot longer than it should. On the plus side, at least I can get things done outside because it’s not raining. 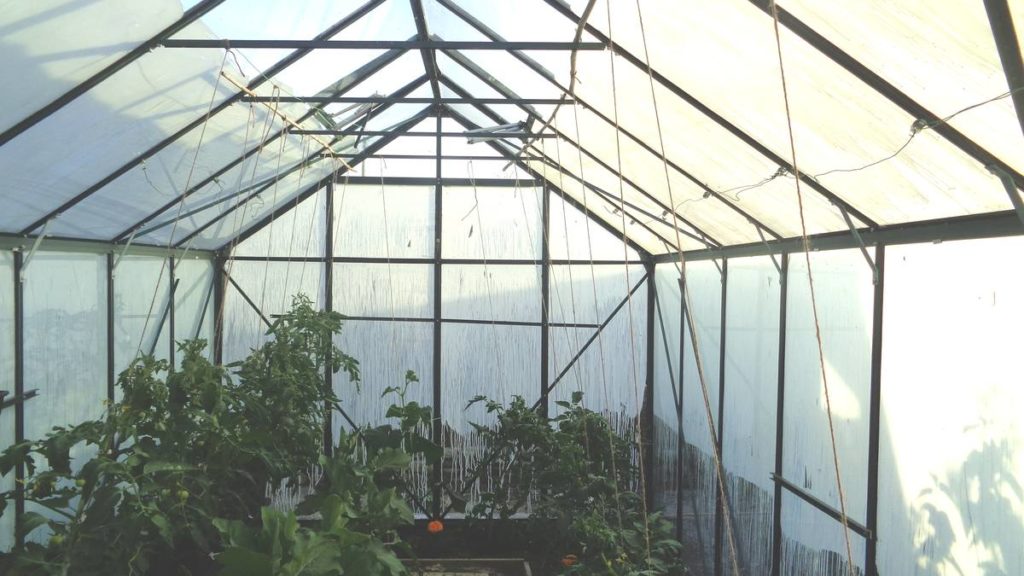 Inside the Shaded Greenhouse 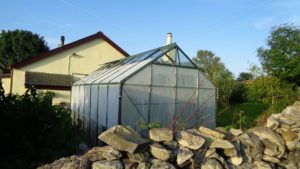 I suppose I should apologise for ruining the summer. We’re most likely going to get another cold, wet summer and the heatwave we’ve been enjoying is going to end now. The reason is that I’ve painted the greenhouse to reflect the heat away using Nixol shading. It’s a Dutch product that is very white and reflective when dry but more translucent so lets in more light when it’s raining and wet.

To start I mixed up half a tin which was sufficient to cover the greenhouse and to put some onto the roof windows of the potting shed. You can see from the photo that I left a strip down the centre of the greenhouse so that it still gets plenty of light but not scorching the plants. I only did the sides part way down as the base is shaded by the slope of the land on the east side and the blackcurrants on the west.

If I’d realised we were going to have the weather we’ve been enjoying I’d have shade painted the greenhouse earlier. This is the first year when I’ve really felt it necessary to do it. Anyway, I’ve half a tin of Nixol on the shelf for next year. 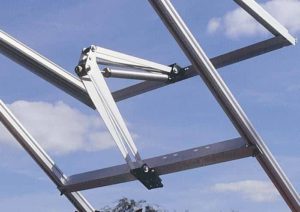 I’ve also bought another 2 autovents. Because of the winds here I need something a bit more powerful than the basic so went for the Bayliss XL Autovent which I know will be sufficient to hold closed in the winds but a bit more robust than the basic vents.

I’m replacing one that is about 10 years old and the hydraulic tube doesn’t work well. You can get replacement tubes but they’re only about £4.00 less than the whole fitting. Since the fitting is a bit bent it didn’t seem worth penny pinching.

So now all the vents are automatically opening and closing. 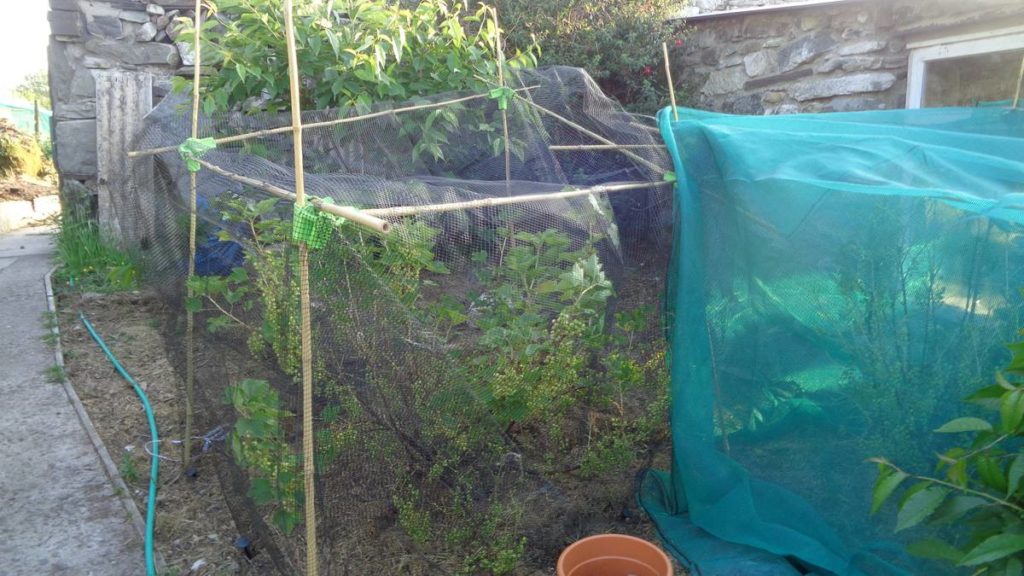 Netted Redcurrants – It ain’t pretty but it does the job.

Last year we had a small crop of redcurrants. As they turned from green to red, the birds swooped in and ate the lot. This year, having fought off the caterpillar hordes, we have masses of green redcurrants hanging from the stems. They’re just starting to ripen to red and it’s our turn to have them.

I only need to keep the birds away for a few weeks as they turn red. They’re on a triangular, sloping piece of land with a couple of cherry trees so it would be tricky to build a full fruit cage around them.

If I draped nets directly over the plants it would be partially successful but I’ve seen birds perch on netting and gobble away outside fruit. So I’ve built frames around the bushes with bamboo canes and draped various bits of netting over those. Joining the canes was easy using Figo connectors.

Connecting bamboo canes can be a nightmare job but the Figo cane connectors make it easy. 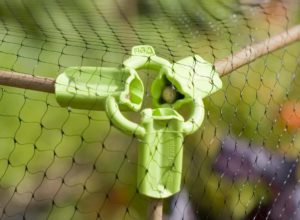 These are a brilliantly simple method of connecting canes together to form a structure like a small fruit cage or a fleece support. They’re made from a tough but flexible ethylene propylene-based weather-resistant material and guaranteed for 3 years. Mine are at least 5 years old (I can’t remember when I got them, I think it was 2012).

They’ll take and firmly grip canes between 8 mm and 16 mm – which is unique in my experience. That’s important because canes vary in thickness from base to tip. You just push and wiggle the cane into the connectors and that’s it, job done. With a complex creation you can fit 2 Figo connectors onto one cane, the cane can be pushed right through the centre.

Figo cane connectors come in 2 types: a 3 way connector which does a corner (left, right and vertical) and a 4 way intermediate connector. The best way to buy them is as a box of 10 mixed but you can buy the 3 way connectors individually.

Having tried a number of different cane connectors and tying the canes together with string or wire, I can’t recommend the Figo cane connectors strongly enough. They’re not cheap but they last for years, are easy to use and do the job well.