Sometimes I wish I was one of those marvellous gardeners you see on TV. They never seem to get anything wrong, weeds and pests just run away at the sight of their camera crew. And then I woke up! 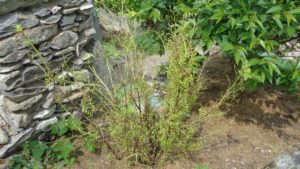 Redcurrant Without Leaves – the caterpillars have eaten the lot! 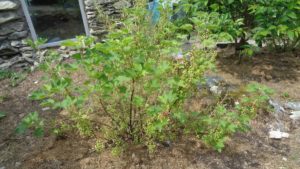 Redcurrant Bush Half Eaten – this bush is doing a little better, but not much.

Last year we were looking forward to a crop of redcurrants when our efforts to encourage the local birdlife had an unexpected consequence. The currants were just turning red when overnight, actually most likely early morning, they flew in and ate the lot.

This year the plan is to build a temporary cage around the bushes and net the birds out. So, up to the bushes to check how long the canes need to be. The first bush was OK but some leaves were gone just leaving stalks and currants near the base. The second was worse and the third had hardly a leaf left.

The culprit was a swarm, masses of small dark green caterpillars. Well they got sprayed with extreme prejudice. To help them recover and regrow leaves I then fed them with Miracle Gro. It’s fast acting as it is soluble and high in nitrogen which they’ll need for the foliage growth. I can’t say I’m confident, but I’m hopeful.

Harvested the Homeguard early potatoes from the polytunnel. I planted just 5 tubers and got a nice full 5 gallon bucket full. There was one problem though. One of the plants looked like it had been treated with hormonal weedkiller which made me worry about aminopyralid contamination in the compost.

It started well enough and then basically curled up and turned a sickly yellow. Under the surface were just a couple of small misshapen tubers that didn’t go in the bucket.

They’re not particularly nice as a boiled new potato. Val described them as ‘hard’. I explained that they needed to be hard to resist a German invasion if it should come. You may groan! Great chips though, so that’s a big plus point in my book.

My motor mower developed a problem with one of the drive wheels. It was going round to a point and then sticking. I think it might just be a stone caught up in it but I couldn’t see how to take the wheel apart and find out.

It’s gone down to the repair shop but they’ve a big backlog at this time of year and it could be two weeks even if it’s a quick and simple job. It’s daft, I can get the car into the garage and get it serviced with less hassle. The car is hardly more expensive to service either.

The Merry Tiller was having a problem with the belt coming off the big wheel and the tines not stopping when the clutch was released. Armed with the Merry Tiller manual, I’ve adjusted it to tighten up the slack in the drive belt and I think it’s fixed. Whilst I was feeling pleased with myself, I lack the engineering gene and felt adjusting a nut to be as complex as brain surgery, I decided to change the oil.

I ran the machine for a few minutes to warm up the engine and the oil before unscrewing the drain plug and letting the black, dirty oil run into an old oven tin. Then, after cleverly remembering to replace the drain plug, added a pint of clean oil through the filling point. My genius know no bounds!

Being serious, the oil change is a doddle but I won’t know if I’ve fixed the slack belt problem until I next use the tiller for actual work.