Propagation – Sowing to Pricking Out

Efficient Use of Space versus Convenience

I’ve got a large (10 x 14) greenhouse and a large (10 x 8) potting solar shed in which I have propagators and grow lighting so I can get plants going early in the season. Following on my research into the most effective temperatures for germination, I’m making more and more use of propagators.

This year I’ve run out of space a few times and was even thinking of possibly getting another greenhouse with a heated germination system. Thinking it through a bit further and after discussions with the boss about a major spend, I decided to take a step back and look at more efficient use of space. 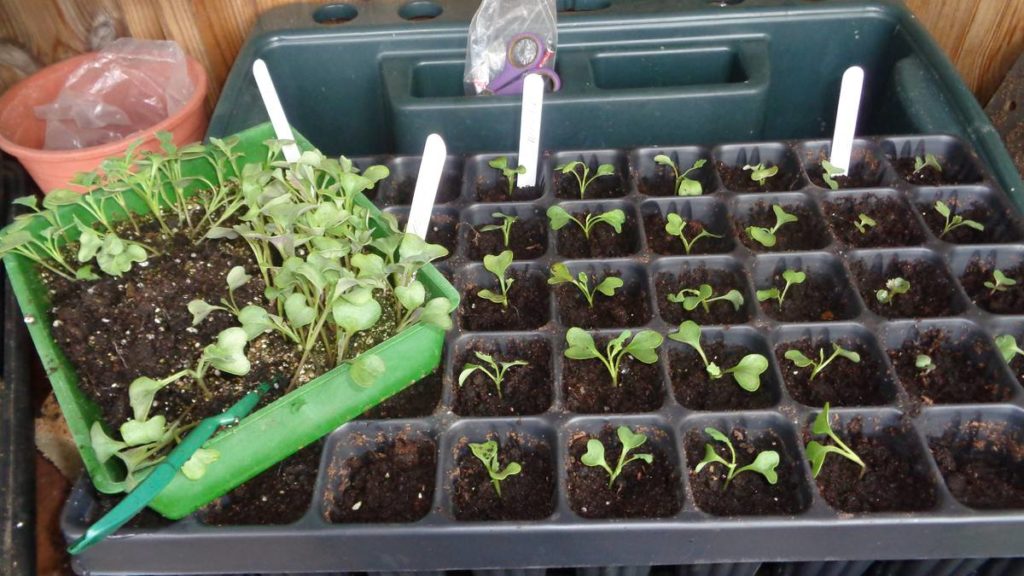 Pricking Out Brassicas from the seed tray into deep modules

In the past I’ve tended to sow in modules, sowing a few seeds and reducing to one plant per module. The thing is the modules take up a full seed tray, so filling the propagators up doesn’t take much. If I’m going to use the propagators to advantage for initial germination I need to use another method that uses less space. It’s a little fiddly and takes a bit more time but it makes far better use of space.

I take a half-sized seed tray and fill with my normal seed compost. Then I sow a strip of seeds on the surface. You can get 3 strips across the tray but it’s easier to start with 2 until you’ve got the hang of it. The trick is to sow spacing things apart enough to be easy to transplant without spreading to the adjoining strip. This makes the next step easier.

With tomatoes where I’m looking at a relatively small number of seeds I’ll often just use a small, shallow pot to sow in.

Pricking out is the jargon for transplanting the seedlings at an early stage from the seed tray into the next container. This is the bit that worries new growers. It really isn’t difficult but the chances are you’ll damage a few along the way. Don’t worry about it, you’ve plenty of spares at this stage.

The main thing is to be gentle and to only handle the seedlings by the leaves. Most likely the plant will survive the loss of a leaf or a damaged leaf but not damage to the stem. In the olden times we used a pencil and a lollipop stick as tools to help but now you can get little plastic sets like the picture from Ebay for less than a pound. A small improvement. 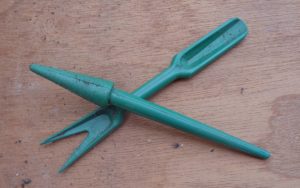 Not all plants take to this method, root crops like carrots generally cannot be easily transplanted but leafy brassicas and tomatoes will move along happily with hardly a check. When transplanting those it’s best to plant deeply. Often the seedlings have been drawn upwards in the tray and have a long stem.

Dib the hole and set the seedling so that the leaves are just above ground. This will also encourage root growth with tomatoes.

Don’t leave the seedlings too long in the tray as the roots are often longer below ground than the plant above. If they get tangled together pricking out becomes difficult – not impossible, but a lot harder.

It’s helpful to sow varieties that will germinate at roughly the same time so the seedlings are ready to move on at the same time.