What is even better than a Vitopod? 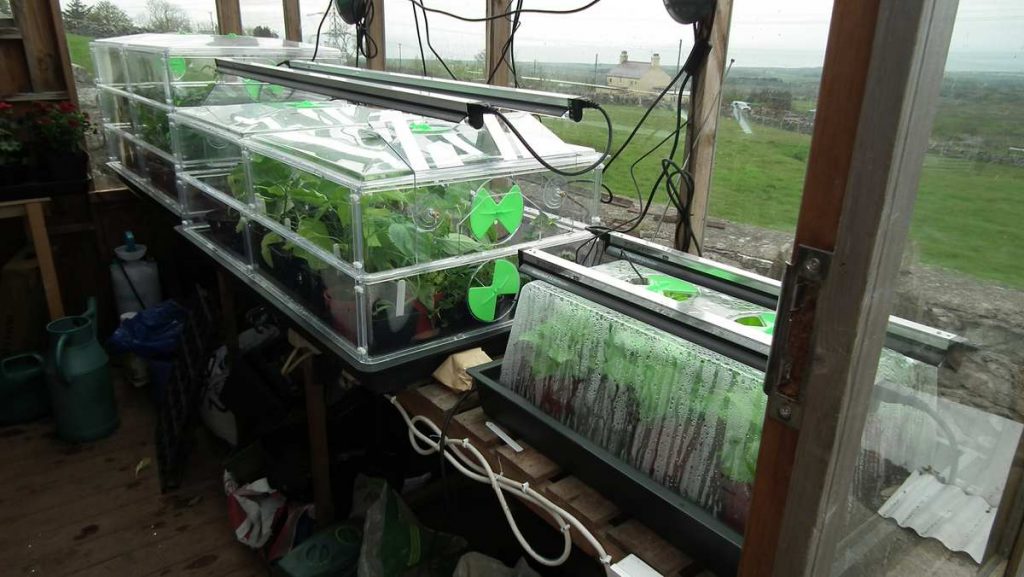 As you probably know, I think the Vitopod is about the best propagator you can get. It’s a masterpiece of British design, versatile and durable. You can use it for germination, bringing on seedlings and over-wintering tender plants. Accurate temperature control and you can vary the height to accommodate growing plants.

So, what is better than the Vitopod? Well that’s actually a trick question with 2 answers!

The first and probably obvious answer is 2 Vitopods. When my greenhouse was destroyed in a storm, the Vitopod was in it and didn’t do well.

The heated base tray was fine but most of the transparent side panels and lids were smashed beyond repair even with two tubes of glue. So I replaced it, along with the greenhouse. I couldn’t throw away the base or the thermostat so they got stashed at the back of the shed.

I had thought that I might construct some sort of cover to go over the base but that was one of those things I hadn’t got around to. Anyway, I took a mooch around the Greenhouse Sensations web site (the manufacturers of the Vitopod) and popped ‘Vitopod Spares’ in the search box. I discovered you can buy the layers, lids, in fact all the bits separately.

So, no more ado I was adding to the basket and a new Vitopod arose from the remains of the old!

Now you might recall that this year I got a Geopod which is a heated propagator with lights. I’ve been really impressed with the results, better growth and sturdier plants despite being really early in the season with short daylength and low light levels in the day anyway.

It’s very hard to see light levels, our eyes adjust automatically but an old-style camera light meter will show it up and it’s very obvious in the amount of electricity our solar panels generate. The stronger the light, the more energy that plants have to convert nutrients into plant.

Once I calculated the running cost of the grow lights (not a lot!), especially taking into account that the energy the lights use reduces the electricity for heating, I was sold on the concept. Bringing on early tomatoes and peppers for greenhouse and polytunnel is so much easier with horticultural lighting.

This brings me nicely to the second improvement to the Vitopod – grow lights. I bought a couple of 120 cm grow lights from one of those shops that supply naughty herb growers which I intended to hang from eyelets over the propagator.

Then I discovered that Greenhouse Sensations were ahead of me and have developed a support bracket that fixes onto the side of the propagator. So if you’ve already got a Vitopod you can upgrade it with a lighting kit.

Like many great ideas, it’s really simple. The shaped perspex (or whatever the material is) bracket that holds the lights is connected to 2 suckers that hold on the side. I was a little concerned about the suckers coming loose but they’re rock solid. If you don’t get them perfectly level, no problem – just adjust the fixing screws.

Things are a bit crowded at the moment because we’ve had a spell of cold weather and I didn’t want to shock the plants by planting out in cold but they’ll be going out soon. And soon it will be time to pack the propagators away except for one Vitopod which will be used to over-winter some of Val’s decorative plants.

4 comments on “What is even better than a Vitopod?”

Leave a Comment Here on What is even better than a Vitopod? Cancel reply