You might have noticed I’ve not been online for a while, the reason is that just as I was uploading a new diary post my computer went bang. I mean, literally bang along with a flash and a puff of smoke. No magic genii of the computer appeared though!

I knew immediately it was the power supply that had gone. Unfortunately it had also taken out the motherboard and memory which was not good, so it’s been in the local computer blacksmith’s shop for repairs.

Now normally this wouldn’t have kept me offline as I’ve got a laptop which I keep synchronised with my files and so forth. Guess what? Yep, it decided now was the perfect time to turn up its toes and visit the great digital chip in the sky.

So the choice was to buy a new PC or wait a few days which turned into a few more days and then two weeks. It’s been quite strange not having a computer, I’ve felt quite lost in some ways but I’ve spent more time reading and way more time outside taking advantage of the lovely weather we’ve been enjoying on the plot.

I realised that putting the raised bed coldframe at the end of the centre bed wasn’t the best position for it so it’s been moved to the side enabling me to use the crop bar above to put more strings up for climbing beans.

I don’t think I’d grow quite so many beans in the polytunnel if we lived somewhere more sheltered but the winds here just blow normal bean supports over. If I get chance to build one, I may try a dog-leg bean frame outside.

I’ve sown Cobra climbing French beans and Firestorm runner beans which are pretty much self pollinators. Ordinary runner beans don’t do so well in tunnels unless pollinating insects can get in there.

In the centre bed I’m growing sweetcorn. Ideally they should be spaced at 45cm each way but these will end up just a bit tighter at 43cm in rows 45cm apart. I should get 18 plants so possibly 36 cobs. I’m trying a new to me variety, Earlibird. Hope it lives up to its name!

I’ve started those chitting in a sealed casserole with a lid in a cupboard in the lounge and after just 3 days they went into pots. Another 3 days under heat and they were ready and planted out.

It’s starting to get full in the tunnel; bush plum tomatoes, aubergines, cucumber and a courgette planted. Very poor germination with my carrots – possibly too warm but I suspect my seed is at fault.

My last post before the computer died was about my Vitopods and grow-lights, these have now been taken down. The lights wrapped in bubble-wrap are safely in the loft and the perspex sides and lids stored away in the shed. The Vitopod bases will serve as trays for the summer.

A lot of space is being taken by Val’s flowers which will be going into pots soon to brighten up the house. The effect of the grow-lights and heat has brought them on brilliantly.

What I could really do with is a good coldframe now. I’ve a twinwall plastic one but it’s t0o light to be used here unless it’s fixed to its raised bed base because of the winds. I’ve got some large sheets of toughened glass which would make good tops and so another construction job beckons.

I’ve 9 types of potato planted in the new walled vegetable garden which is probably a bit over the top, but I’m still experimenting, trying to find what works best here. Over in the raised beds I’ve three types of onion planted along with shallots and garlic.

The jostaberries and blackcurrants are forming nicely and the Bardsey apple is in blossom which bodes well. The poultry seed mix has sprouted so that will soon be ready for the chickens. I’d best get on with building the fox protection cage! 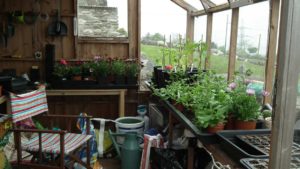 Flowers in the Shed Greenhouse which needs a tidy up! 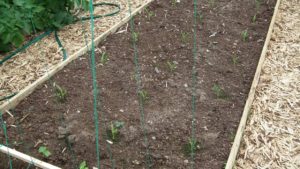 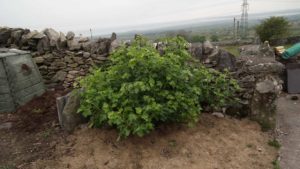 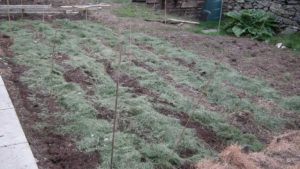 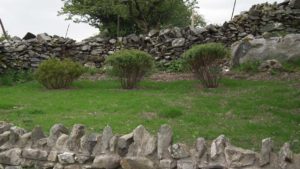 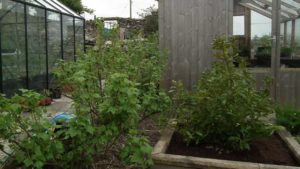 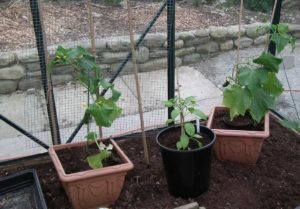 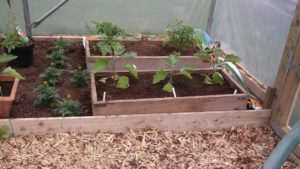 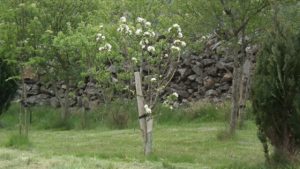